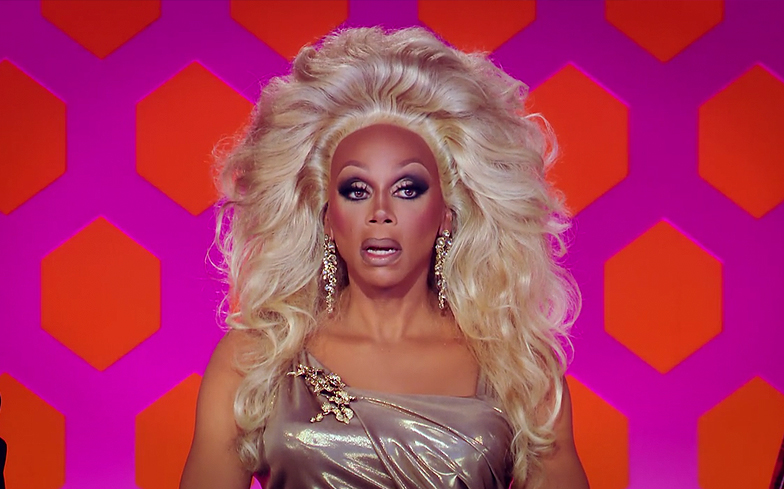 With just a few weeks until the Drag Race season 11 grand finale, the competition is getting fierce.

This week saw the final six queens reunited with six of the eliminated queens from this season for the much-loved makeover challenge – but the final result has left fans scratching their heads.

First up, however, the tone of the episode was set with the always dramatic Slap Out Of It! mini challenge, with the queens reading each other for filth before delivering a well choreographed blow to the face.

Brooke Lynn Hytes was named top slapper for the challenge, which meant she won the opportunity to pair the queens. The Canadian queen’s most talked-about pairing throughout the episode was Silky Nutmeg Ganache with season 11’s first eliminated queen, Soju.

Silky considered it a stitch-up, especially when she found out Soju can’t actually walk well in heels.

But despite feeling on the back foot with her pairing, during his visit to the workroom RuPaul also pointed out that Silky needed to focus on her runway outfit this week as the for the past few episodes she has been criticised for poor padding and her costumes falling apart.

What’s more, continuing this season’s penchant for a work room brawl, Silky also came to blows with Yvie Oddly and Scarlet Envy after the latter admitted she was surprised to see Silky still in the competition. That was never going to go down well. Oh and there was Wig Gate. Ariel Versace took the opportunity during her return to find out what happened to all of the hair she accidentally left behind.

We never really got to the bottom of it – apart from one wig being left for Silky, and Plastique assuming a few were for her as she is good friends with Ariel – and ultimately it came down to Ra’ Jah O’Hara allegedly running off with the wigs following her elimination. Something tells us this is going to come up during the Ru-Union episode.

This week’s runway was overall quite strong.

A’Keria C. Davenport and Honey Davenport, Brooke Lynn Hytes and Plastique Tiara, and Vanessa Vanjie Mateo and Ariel Versace were all praised for their makeover presentations. Yvie Oddly and Scarlet Envy had a mixed reaction, but it was Nina West and Shuga Cain and Silky and Soju who found themselves in the danger zone – but for very different reasons.

Nina was criticised for her Pride-themed outfits as they didn’t come across ‘fashion’ enough which, for this challenge, she accepted was a fair remark.

Silky, however, was called out for her outfit coming apart and looking too fancy dress (again), while also applying Soju’s makeup too harshly.

Then Ru decided it was time to stir the pot even more and ask each of the 12 queens standing on stage who they think should go home. It was a pretty split consensus that it should be between Yvie and Silky.

Now we get to the decisions that fans are not too happy with.

First up, Brooke Lynn Hytes was named the winner of this week’s challenge which, considering the immaculate makeover of Plastique and the runway presentation, was deserved.

However, Vanjie also performed really well this week, and fans would have liked to see the queen claim her first main challenge win of the season on this occasion.

That being said, we’re pretty sure Vanjie was relieved that she avoided the bottom two this week, and was safe alongside A’Keria.

It then came down to the bottom three, and Yvie was told she was safe which felt like a very skin-of-her-teeth pass to the Top 5. For the first time this season, both Nina West and Silky Nutmeg Ganache had to lip sync – and to TLC’s iconic track No Scrubs.

We’ve been hearing all season long that Silky would lip sync any queen she’s up against into oblivion, so obviously fans were ready for an electric showdown between the two.

The final result, however, was summed up perfectly by Ru who simply responded with a “meh” when the song finished.

Despite the disappointing lip sync, one of the queens had to be saved and Ru opted for Silky, meaning that Nina West – a fan favourite throughout the series – sashayed away.

Fans weren’t on board with the decision though and have taken to social media to post their views on the result.

on tonight’s episode of #DragRace pic.twitter.com/7T7B81zfZo

I like Silky, but was Ru and I watching the same lipsync?

Silky wasn't lipsyncing words correctly, hair got stuck in her face, and outfit coming apart, while Nina knew the words and was dancing on the beat.

This episode was RIGGED #DragRace pic.twitter.com/aWSKkWYvfQ

I’m gonna say it. If Nina wasn’t gonna be the winner of that lipsync, they BOTH should’ve gone home. That’s the tea. #DragRace

If we being real… this should've been a double elimination #DragRace pic.twitter.com/Dd9z3hDlpc

“Hello, Officer? I’d like to report a crime. Vanjie should have won and Nina should have stayed!” #DragRace pic.twitter.com/QYM5OYaBIu

Nina West improves every episode but has 1 bad outfit and get sent home??? While Silky does the same shit over and over and stays? #DragRace pic.twitter.com/uKIezlmE63

With five queens left we are entering the endgame of this season, with only four them being able to make it through to the grand finale later this month.

No doubt that as that crown and sceptre come into sight, tensions are going to continue to run high in the work room.