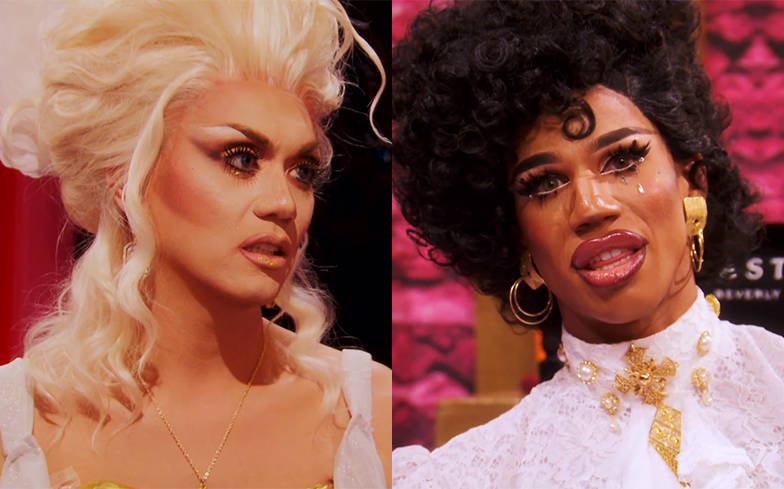 A deleted scene from the latest episode of Drag Race All Stars has been circulating the internet, and fans are confused as to why it didn’t make the final edit.

During the show’s fifth episode, the queens were tasked with paying tribute to Lady Bunny by roasting her for filth, and before they hit the main stage, Manila Luzon and Naomi Smalls shared a tender moment in the werk room about their loved ones who had passed.

Naomi asked Manila if she had ever spoken at a funeral before, to which she replied: “I didn’t speak at Sahara’s funeral because I didn’t know how to. I wasn’t ready.” Sahara Davenport competed on the show’s second season, and tragically passed away in 2012 due to heart failure. The two were in a committed relationship.

“I spoke at my brother Dylan’s funeral, he was two years older than I was,” Naomi revealed to Manila. “This was when I was 22, so he was 24 when he passed. He was one of my biggest fans ever. He was mentally challenged and I was always very defensive and protective over that.

“If he was ever bullied or made fun of, I was always the first to stick up for him. He was so pure and so innocent, I couldn’t imagine how anyone would have any problems with him.”

It’s one of the most emotional scenes we’ve ever seen on RuPaul’s Drag Race, and it’s an utter shame it wasn’t included in episode. Watch below.

Fans have been vocal on social media about the scene’s omission, and we don’t really blame them.

getmygoodjush: Thought I’d share this as it doesn’t seem like many people have gotten to see it which is a shame. A really nice moment between Manila & Naomi talking about Sahara and Naomi’s brother.

realw8man: they couldn’t find a way to put snake rattles over this so they left it out.

thesocialist1: Is it just me or its so nice to watch a scene without the god dam sound effects?

lanaeliza: How could they cut this? It’s such a beautiful moment.

mansonfamily: Why would you ever cut this, what the fuck did they include in the last episodes work room interactions that was at all better than this? VH1 production staff you’re a god damn mess.

daida: this is so important, and it would’ve made a nice contrast to MoMo giggling about funerals together! LET US HAVE NICE THINGS ALEXIS!

pineappleandmilk: This seems like one of the realest moments between any of the queens in a while. They are really trying to make sure Naomi gets no screen time this season.

Nyma-: These are the moments that are making the show weaker to what it was back on Logo. Past seasons didn’t shy away from taking a break from all the drama to shed light on serious issues or heartfelt interactions. Most of what VH1 has aired has been either manufactured drama or utter riggery to shock everyone.

Kentuckyfriedcooch: See this is such a sweet moment, it doesn’t feel forced like production coerced them into talking about something that they didn’t want to speak on. This was one of the moments on drag race I feel like I could relate to, you know besides the gay thing, and it turned out so well and so sweet. I’m honestly a little mad they cut it.

tymoore01: I love drama and stuff but i do feel like moments like these need to be kept in too because it helps character development and makes the viewers like the queens more which makes every elimination harder for the viewer and overall makes the season better.