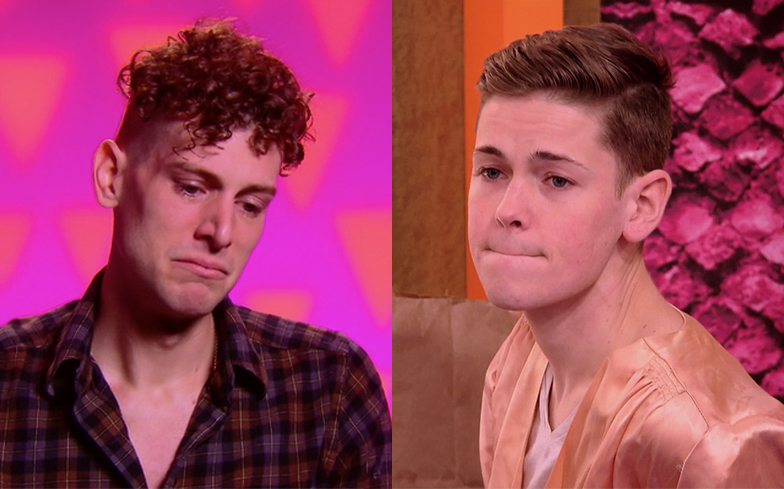 Week in, week out, Drag Race serves up plenty of sassy drama, sickening outfits, and some truly entertaining lip-syncs.

But the show is at its finest when it peels back the make-up, removes the wigs, and rids of all the padding to delve into the real-life experiences of the queens who grace the competition.

This week, Dusty Ray Bottoms was an inspirational example of bravery, recalling her tough coming out journey to educate the masses on the damage anti-LGBTQ attitudes can do.

During a conversation with Blair St. Clair in the workroom, Dusty revealed that when she was younger she was subjected to so-called conversion therapy.

“My parents have never seen me in a show. I don’t think they’ll ever come,” Dusty said. “Me and my family don’t really talk anymore. My family doesn’t even know I’m here.

Related: 10 of the best memes that show why Miss Vanjie is the true Drag Race winner

“When I came out to my family, the night before it happened I was literally at my breaking point. I was at my lowest low with everything. I literally cried out to God, ‘I need a change in my life. I need something to happen. I need it to be different for me.’

“Literally the next morning my mom was like, ‘Hey, come downstairs, we need to talk about this.’ Then the whole me coming out happened.

“My mom knocks on my door and says, ‘Your dad just found something on your computer.’

“They lost it. They took me to church. They got me exorcised, because they thought I was possessed by a gay demon.”

Dusty continued: “I had this prayer warrior standing in front of me, my mom and dad were standing behind her looking at me, and I had to list every person I’d had a sexual encounter with.

“I was so confused after the whole thing went down because, ‘Was I straight now?’ I had to go through therapy and I was on track to go to ‘straight camp’.

“I was meeting with these pastors, and he was like, ‘In a homosexual relationship you’ll never find success. You’ll never find love.’ I stopped him, I went upstairs and I packed my car, and said ‘I can’t do this anymore.’

“It was the most humiliating, awful thing of my life. Ever.” But as testament to the LGBTQ mantra ‘It Gets Better,’ Dusty weathered the turbulent period in her life to move on to bigger and better things.

“Now I have a wonderful fiancé, and we have a beautiful life together,” Dusty said. “Things are going really great in my life, and I didn’t have to compromise or change for someone’s small-minded view. But it was a journey.”

‘If you can’t love yourself, then how the hell are gonna love anybody else’ has never rang more true.

As for all the glitz and glam elsewhere in this week’s episode of Drag Race – and look away now if you want to avoid spoilers – all the queens served up some hilarious skits as part of an acting challenge to create promos for a new app.

However, Yuhua Hamasaki and Mayhem Miller found themselves in the bottom two, and lip-syncing for their life to Celebrity Skin by Hole – in front of Courtney Love, no less.

Unfortunately for Yuhua, Mayhem Miller aced her lip-sync with ease.

Yuhua became the third queen to be eliminated from RuPaul’s Drag Race season 10, leaving 11 queens left to battle for the title of America’s Next Drag Superstar.

RuPaul’s Drag Race airs on Thursday nights in the US on VH1, and is available to stream on Netflix in the UK every Friday.