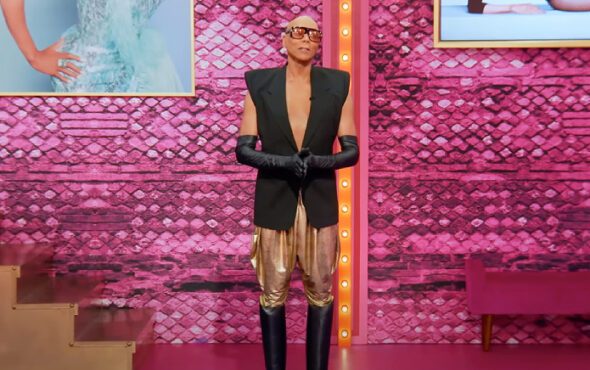 RuPaul dropped another bombshell on this week’s episode of Drag Race All Stars 7.

Last week, the queens brought their best storybook characters to the witness stand in the Fairytale Justice courtroom, presided over Michelle Visage, before stomping down the runway with spike-inspired couture.

Jinkx Monsoon won her second challenge of the series, although she was unable to receive another Legendary Legend Star after being blocked by Jaida Essence Hall.

The Vivienne earned her first star and defeated Jinkx in the lip-sync smackdown to Love Will Save The Day by Whitney Houston.

The Drag Race UK winner ultimately chose to ‘award’ the Platinum Plunger to Monét X Change, who subsequently declared war (of sorts) on The Vivienne.

For their fifth maxi-challenge, the contestants were tasked with writing and delivering commencement speeches for ‘draguates’ around the world. As the blocked queen, Monét was bestowed with the power to determine the running order, choosing herself first and her new frenemy The Vivienne in last place.

Before the queens received advice from Carson Kressley and stand-up comedian Nikki Glaser, however, RuPaul announced that, this week, the top two winners will receive two Legendary Legend Stars: one for themselves and another to the queen of their choice. Another twist? Gasp!

While all of the contestants delivered hilarious speeches, it was Jinkx, Raja, The Vivienne and Shea Couleé who were singled out for praise. Speaker of the House, Nancy Pelosi, made her ruturn to the series before the queens untucked to express her admiration for the cast and the drag art-form, while also encouraging viewers to vote in the upcoming midterm elections.

After the winners sashayed down the main stage in the category, “Veiled It”, Ru declared Jinkx and Raja the top two of the week, providing the former with her third challenge win and second star and the latter with her first.

The season three and five alumni then lip-synced to Better in Color by Lizzo, with Jinkx triumphing and choosing to block The Vivienne – who said she would’ve blocked Jinkx last week if she was eligible – from receiving a star next week.

On next week’s episode, Jinkx and Raja will ruveal which queens they will award their second stars to, while the winners will live their “Y2K girl group fantasy” on a flashback episode of MTV’s TRL.

Check out the best reactions from the latest episode of All Stars 7 below.

when i tell u this raja runway is one for the history books #allstars7 #DragRace pic.twitter.com/pWb4q7wSz2

the way raja ate up this ep and finally got her star after being robbed for so long, queen shit !! #allstars7 #dragrace pic.twitter.com/pXZIV1Skst

I just love how most of ‘em can put a lump on your throat and right away make you burst out laughing. I can’t even decide who’s the weakest this week – except for Raja’s lip sync. Girl wasn’t even trying. Hahaha!#DragRace #AllStars7 pic.twitter.com/dUhU3sGQpL

this jinkx look might be my fav of hers so far in drag race #allstars7 #dragrace pic.twitter.com/qXmMGaLWUb

raja are you kidding me? a fucking SHOOT. #dragrace #allstars7 pic.twitter.com/uMwV9k10yl

Viv is so damn good at impressions, like give my girl an Oscar. #DragRace #AllStar7 pic.twitter.com/eUNJRVBvWN

A RAJA AND JINKX MONSOON LIP SYNC?! This All Winners season will never be topped 😭 #DragRace #AllStars7 pic.twitter.com/ChBS4wN4Mi

no cause this is the best cast drag race will ever have, they ALL turn it out every single week it's such a joy to watch #AllStars7 #DragRace

Everyone did so well in the challenge, everyone looked so good on the runway!!!! ALSO we got to see raja lipsync for the first time in 11 years! one of the best episodes for sure #DragRace #AllStars7

She is not the trade of the season, she is the Tajín dealer.@jaidaehall @JinkxMonsoon #AllStars7 #DragRace pic.twitter.com/k6bq92GzF8

I mean seeing Raja and Jinkx winning is the reason I pay my Wow+ subscription for! They are the best!!#allstars7 #dragrace