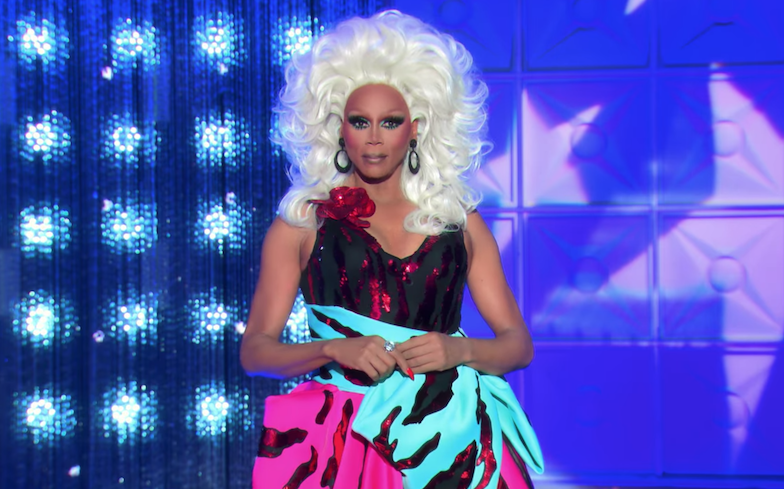 This week’s episode of Drag Race? It’s up there with the best.

Following the All Stars 5 premiere, which saw Derrick Barry become the first queen to sashay away this season, the nine remaining competitors return to the werkroom and reveal which queen they chose to give the boot.

“You’re joking, right?” Mayhem asks Jujubee. “You’ve known me for years and you know my range of talent. I thought that you would’ve been like, ‘You know, I do know Mayhem and I know that she has the potential to stay here and do well.'”

“If we wanna decipher the performances, I liked your performance… I just laughed more at Derrick’s,” responds Juju, to a visibly stunned Mayhem. “It’s not personal. But it didn’t affect you. Your feelings are very valid and I acknowledge that.”

Realising she gave Mayhem the classic I’m sorry your feelings were hurt-esque response, season two’s robbed Miss Congeniality stops in her tracks and says: “That’s not a real apology. I’m sorry that I hurt you.”

The next morning, the drama and conflama continues when Cracker tells her fellow queens she regrets not embracing her inner BenDeLaCreme and using white-out to plaster Ongina’s name on the lipsticks. It’s another ‘gasp!’ moment.

“I don’t know if I did the right thing,” she explains. “I feel I should’ve brought in some white-out, maybe, because Ongina… Derrick and Mayhem believed that they could do it, and you didn’t believe in yourself. That’s an All Star thing.”

Cracker says she was “up all night” thinking about the decision, which doesn’t really make any sense because it wouldn’t have changed the verdict, like, at all? This scene alone raises the question: is Cracker gunning for the villain edit?

Later, RuPaul announces this week’s maxi-challenge: to compete in three opposing girl groups and compose lyrics for the brand spanking new romantic pop anthem, I’m In Love! aimed at the celebrity crush of their choice.

Ru asks last week’s winner, India, to reveal the two queens she considers her biggest competitors. She names Shea and Blair, and all three are named team captains. India recruits Jujubee and Alexis, Blair teams up with her season 10 sisters Cracker and Mayhem, while Shea picks Mariah and is left with Ongina by default.

After rehearsing the performance, where Cracker’s behaviour irritates her team members, the queens hit the stage to deliver the final product. It’s cute, but it doesn’t match up to past group numbers like I’m That Bitch or Drag Up Your Life.

Fortunately, the contestants get another chance to wow the judges via this week’s runway, titled Love the Skin You’re In. While all the queens look jaw-dropping (this is All Stars, they ain’t playin’), it’s Shea who emerges triumphant with her “Nubian goddess realness” skin-tight bodysuit, which will surely earn a place on every future ‘Best Drag Race runway’ rankings.

Blair, Jujubee and Shea are deemed the top All Stars of the week (although we feel Alexis should’ve been in there), with the latter earning her much-deserved first win of the season (and fifth overall), while India, Mariah and Ongina make up this week’s bottom three.

While the judge’s deliberate, Ongina throws herself under the bus as she tells Shea: “I have so much more to give and I want to give it. I have the hunger, I have the drive, I want to be here so bad. But you don’t have to deliberate with me. Neither India nor Mariah deserve to go home tonight. This is not me giving up. This is the fairest thing to do.” There might have been some tears.

This marks an opportunity for Cracker to redeem her wholly unnecessary shade towards Ongina earlier in the episode, saying: “A lot of winners start out in the bottom multiple times, and it’s not fair for anyone to say that it means you don’t have what it takes. I made your morning difficult a while ago, and it was stupid.”

It’s now time to ruveal the lip-sync assassin. Last week boasted season 11 winner and contortionist Yvie Oddly – so, how will the producers top that? Luckily for us, it’s none other than the supreme dancing queen, Alyssa Edwards, winner of four Drag Race lip syncs – two of which are considered to be the most iconic of all time (Whip My Hair, Shut Up and Drive). Our expectations are high, to say the least.

Shea turns the party with kicks and splits, while Alyssa… Let’s put it into context: this is Alyssa’s first Drag Race lip sync where she’s not fighting for a place in the competition or a £10,000 cash prize tip, so it feels like she was just there to have a good time and gag the children with her comeback.

Unsurprisingly, Shea conquers over Alyssa and receives £20,000 doollahz (!), as well as the power to chop one of the bottom queens. Her decision? Not a shock. Shea opts to eliminate Ongina, who departs on another tear-jerker moment as she thanks RuPaul for changing her life 11 years ago.

“I’m disappointed that my time here is so short, but this is not the last that you’ll see of me,” Ongina tells viewers. “I promise you that. I’ll haunt you in your dreams, and my legacy will live on forever and ever. And ever!”

Check out the best reactions to this week’s episode of Drag Race All Stars 5 below.

Next week, the eight remaining competitors will design a signature suite worthy of a 5 star hotel.

The first two episodes of Drag Race All Stars 5 are now available to stream in the UK on Netflix.

LGBTQ+ students feel most open about sexuality and gender when at university, report finds