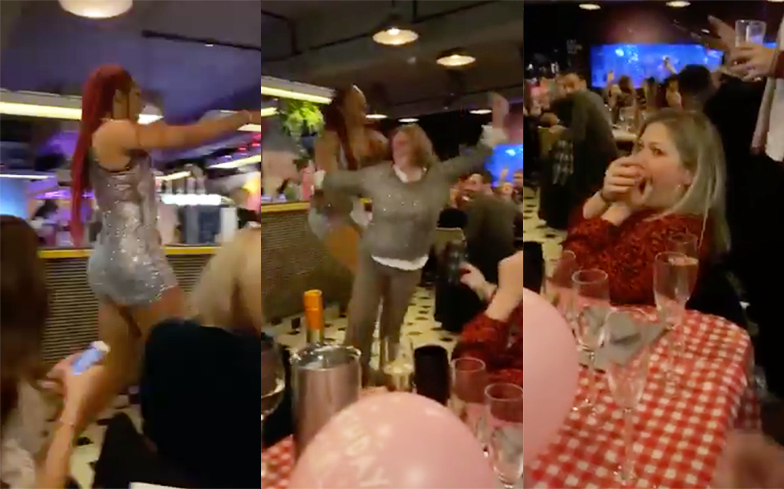 A drag queen has gone viral on social media after pushing a woman off stage during a performance.

Earlier this week, an eight-second clip made the rounds on Twitter showing London-based drag queen Cara Melle delivering a sickening number at a drag brunch, before her performance space was invaded by an unidentified customer.

Cara proceeded to push the woman off stage, which was met with shock from the crowd.

Reactions on social media were mixed. Many users defended the queen because you “DO NOT get on a performers stage when they are performing, you wouldn’t do it at the opera or at a dance show, you don’t do it when a queen is performing”.

Others pointed out that the lady could’ve been seriously harmed, and that Cara should’ve left it to the bouncers.

American Idol star and drag queen Ada Vox tweeted: “That was more than just a “get off my stage”.

“That was inappropriate and unprofessional. If the woman was injured, which is very possible with a push like that, is also a lawsuit for both the performer & the venue with video evidence.”

Drag Race UK star Sum Ting Wong came to Cara’s defence, writing: “The full story is that she is not allowed on the stage when a queen is doing a number. The woman had a great night, they took pics after, kikid, they both walked away happy.”

After receiving backlash online, Cara explained her side of the story in several Instagram videos.

She said that she apologised to the woman and didn’t mean to push her that hard. However, she was informed “beforehand to not get in the way of the performer and not to get on stage while we are doing our thing, she did anyway.

“I apologised to her, we took photos after, she is fine. She had a great time, she got two bottles of Prosecco to go home with! She had a fabulous time, we took pictures together, we kiki’d and I felt horribly for it. Honestly, it ate me up.”

Cara then proceeded to call out her ‘friends’ who slammed her for the incident, saying “I don’t need your gig, bye!”

Watch the viral clip below.