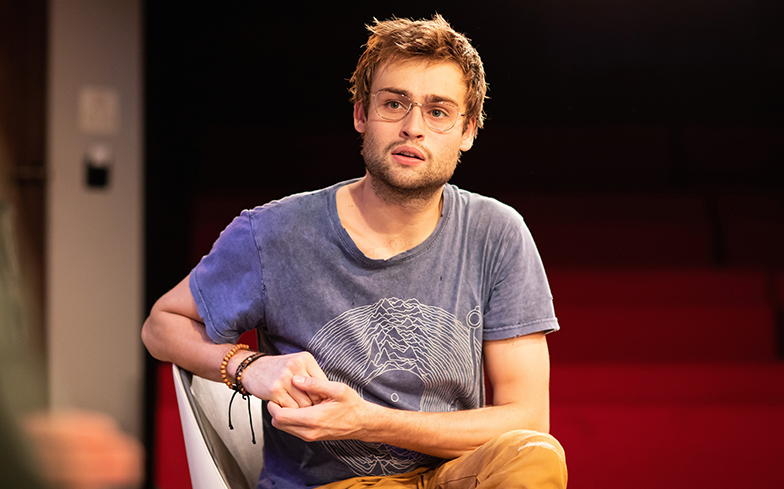 “It’s important to recognise that it’s harder for openly LGBTQ actors to work in this industry.”

After missing his flight back home, Jeremy (Douglas) – who is wracked with an irreparable amount of guilt from his year away – meets openly gay stranger Teddy (Clifford Samuel), and bonds with him in an Amsterdam hotel room over their shared traumatic experiences.

We visited Douglas an hour before his show in his London dressing room and discussed the political themes of the play, why it’s harder for LGBTQ actors in the industry, and how he uses his privilege as a white cisgender man for marginalised communities.

What drew you to the role of Jeremy?
The writing. I’ve done two plays in this space now, and they’re both by young American playwrights. I just really enjoy the pace of the writing, I really enjoy the play. Jonathan Boyle who is our director, his star is thoroughly on the rise. He’s extremely talented, so I was very excited to work with him. It was a combination of the writer, the director, then Cliff came aboard, and I’ve never seen him before on stage but had many friends who said he was brilliant. So the whole package really. And my schedule.

Why is the message of A Guide for the Homesick so important in 2018?
I was literally on the way to work right now, and I saw the post about people having to go into hiding in Tanzania right now because the government are trying to put a motion forward to make it illegal to be gay. It’s a very dense play, it deals with a lot of different things and one of the things that stick out to me is that… Coming out is something that’s gonna be relevant forever because that’s a very personal thing that a lot of people have to do, and will be doing until the end of time. So that’s always relevant, and it’s always an interesting conversation. But also, I had a friend who didn’t understand the relevance, and he had the attitude, the naivety that my character has in the play, like, ‘Everything’s fine, everything’s changing. We’re moving in the right direction.’ And then you see a news story today where people in Tanzania, which is a place I went to when I was 15 on this lovely holiday, are having to go into hiding because of their sexuality. It’s something I believe is still very relevant.

What parts of the play do the audience react to the most?
Every audience is so different. It starts in a certain way, it’s very light and funny, and then it’s almost like a tension screw. The play gets tighter and tighter and more tense, and so people sit back, relax, laugh and enjoy the beginning, and by the end they’re drawn in. They start in one position and end in another position [laughs]. It’s always interesting, because I have to focus so hard. There’s just two of us, as you saw, there’s no breathing space. I always see in my periphery to see people trying to figure out, ‘Oh, he’s someone else. You’re the same person, you’re somewhere else with a medical box, in a clinic….’ I like to see people’s faces trying to put it together, and then they love it, because they’re in on it, then it’s thrilling because they’re on that journey too. What’s the reaction been like from the gay community?
It’s varied. I had a friend from Nigeria who just came out recently, and people react in very different ways. He actually found it very funny, and then my other friend who’s gay was crying. But he’s been out for longer. It’s different. There was this quite nice message from someone, he said: “Hi, I saw the play on Saturday. Both me and my friend were so affected by it, we didn’t speak much for a while afterwards. As a gay man, it has such an important message, and the way you both portrayed it really connected with the experience I had in the past. I saw how you persuaded the theatre to offer discount tickets to younger people, which is vital to do for the young LGBTQ community.” I get a few messages like that, so I think it’s quite positive, but then again I’m not in the bar afterwards to judge everyone’s reactions.

There’s been a lot of debate lately about LGBTQ roles going to straight actors. How do you make sure you’re doing justice to the character?
I think for me, I have to trust my director. We had both the writer and the director in the room, both of whom are gay, and you just have to trust the writing. Ken, who wrote this play, I can see so much of him in this part, and his experiences. Obviously it’s a character, and he interviewed people extensively to create it, but you can see there’s a part of him in there and so I had him as a guide, Jonathan our director as a guide, and you just have to trust them and do what’s written on the page.

What are your thoughts on the backlash of LGBTQ roles going to straight actors?
I think as actors, you hope that can anyone can be free to play anyone because it’s acting. I played Boy George and I’ve played a couple of gay roles. To me, sexuality is one small thing, one part of what makes up a character. I don’t think everything that defines Jeremy is his sexuality, but I do think it’s important to recognise that it’s harder for openly LGBTQ actors to work in this industry. As soon as you come out, you do have to fight that in some sense, which is unfair. But what I hope is, is that there’s a change. Maybe I’m being a bit like Jeremy, being positive, but I feel like our generation don’t think and feel the way other generations do, and it doesn’t matter as much and everyone should be able to play anything. I think it’s an important conversation to have.

Earlier, you mentioned all the gay roles you’ve played. What draws you to these characters?
It’s a number of things. At the beginning of your career, it’s what jobs you can get, you grab any role you can. It’s always a combination of script, the auspices involved, but yeah, sexuality is one part of what makes a character. It’s hard to pin down what draws you to a character, but I feel open enough in myself to play anything. I’ve very much in touch with all parts of myself.

Have you ever witnessed any homophobia towards gay friends – in your personal life or in the industry?
Not in the industry, but a friend of mine got beaten up on the night tube because he was effeminate, really badly. It was an awful experience for him, so unfortunately, at a time when we feel we’re being so progressive, there is still backward mentality. Within the industry, it’s more about a casting thing I think. I don’t know why. It’s a casting thing or an audience thing. A lot of people aren’t openly gay in the industry, they keep it to themselves, they keep it private, ‘It’s easier, why would I reveal that?’ Which is a sad thing. I’ve also had friends who’ve been extremely bold and brave, and I respect to the highest level I could possibly respect them, who have gone, ‘This is who I am, I am bisexual, I am this, I am gay.’ I have a lot of respect for that.

How do you use your privilege as a white cisgender man to help elevate the voices of marginalised communities?
I think it’s very important to acknowledge cis white privilege. It’s a hard balance because some people don’t want actors constantly doing all this stuff for charity, thinking they have a voice. But my thing was, it wasn’t to do with LGBTQ, it was with refugees when I went to Lesvos in Greece and then to Iraq with the UN Refugee Agency. You meet people who are in the most extreme, dire circumstances of anyone I’ve ever met in my entire life, and they’re like ‘Please please give us a voice, no one is hearing us, we’re stuck here and no one cares.’ For me, it’s that understanding that I have a voice and I have a platform, and because of that, I have a responsibility to give a voice to people that may otherwise not have one.

And you’ve been quite outspoken about feminism as well – how important do you think it is that men are vocal about feminism in this current political climate?
People need to have a better understanding of what feminism is. It isn’t anti-man, it isn’t anti-that. We all grew up in a playground environment where you say things like, ‘Oh you kick like a girl’ – all these derogatory things that I never understood as a kid. I remember talking to Emma Watson about it – and I’ve known her since I was 16 – and I remember her talking more and more about it and the more I listened, I thought, ‘When I’m in a group with my laddy mates, am I one of these people?’ It’s sort of a re-altering and adjustment of the way you think, do you know what I mean? So I think it is so important, but again we live in this bubble in London, and I feel like things are moving in a positive direction, but I think we can always have more men in the feminist conversation. There was this quote that summed it up so well: “The enemy of feminism isn’t men. It’s patriarchy. And patriarchy is not men, it is a system, and women can support the patriarchy just as men can support the fight for gender equality.”

What do you hope people take away from A Guide for the Homesick?
I hope that people leave feeling different from when they entered. Any good piece of drama, I hope you enter feeling one thing and leave feeling something else. What I love about it is, it’s an 80 minute play that goes straight through, that takes you on a real journey in a short period of time. And I hope that people will come away, firstly being entertained, moved, having felt something, but also to maybe educate themselves on what’s happening. It’s still illegal to be gay in Uganda. They’re making moves in Tanzania. We need to throw some more light on that. I was talking to people at Help Refugees, I said, “We want you to watch the play first before you invite people down, people from Uganda, because this is quite an intense play.” They said, “You don’t know how much it will mean to them, to know that their story is being told.”

A Guide for the Homesick is now showing at Trafalgar Studios. You can buy tickets here.