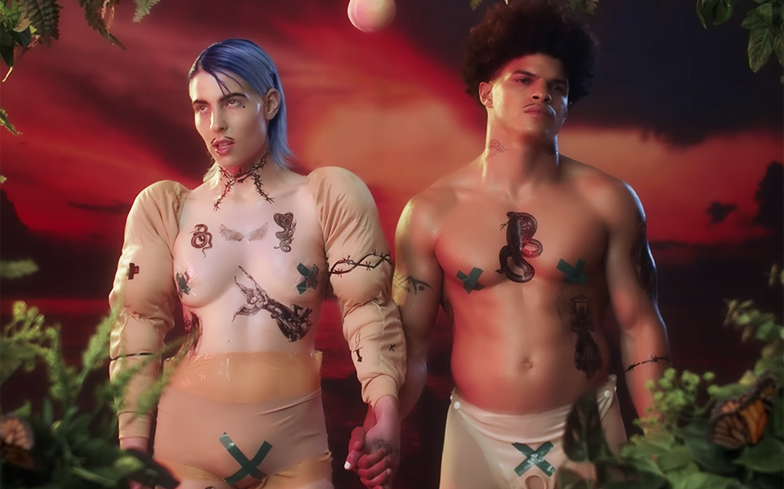 The artsy film follows the song’s biblical theme with religious imagery including angels and an attempted exorcism, as the gender-fluid pop star proclaims “God made me gay” over haunting industrial beats.

The overarching message of both the song and video is that God loves everyone, not just cisgender heterosexual people, but that important message won’t reach young people as YouTube have placed an 18+ age restriction on the video.

Now, when anyone tries to watch the video, the warning “This video may be inappropriate for some users” appears. Viewers have to be over the age of 18 and confirm that they “understand and wish to proceed” before watching.

“Due to some weird homophobic garbage my music video for Adam & Steve is now showing as ‘age restricted; 18+ on YouTube,” Dorian wrote on Twitter.

“There is no nudity, no ‘inappropriate language’, no gratuitous violence… maybe just offensive because it’s gay af?”

Fellow artists including Grimes, HANA, 100 Gecs and Chester Lockhart have also shared their frustration at the video being labelled ‘inappropriate’ for young audiences on social media.

When we spoke to Dorian last year, they revealed that inspiration for Adam & Steve came from their ex-step-mother, whose religious beliefs have stopped her from embracing Dorian and their art.

“This is actually something I haven’t really talked about that much, because my mom and dad are extremely supportive, but my ex-step-mom is very unsupportive and doesn’t even let my younger brothers watch my videos,” they said.

“They live a totally different life out in the country in Texas. She still thinks that what I’m doing is evil and sinful. It’s very different from the rest of my family, and that’s been a huge influence in my life, especially rebelling against that when I was younger.

“Even within my own family, that makes me realise we still have a long way to go.”

Watch the video for Adam & Steve here or below.