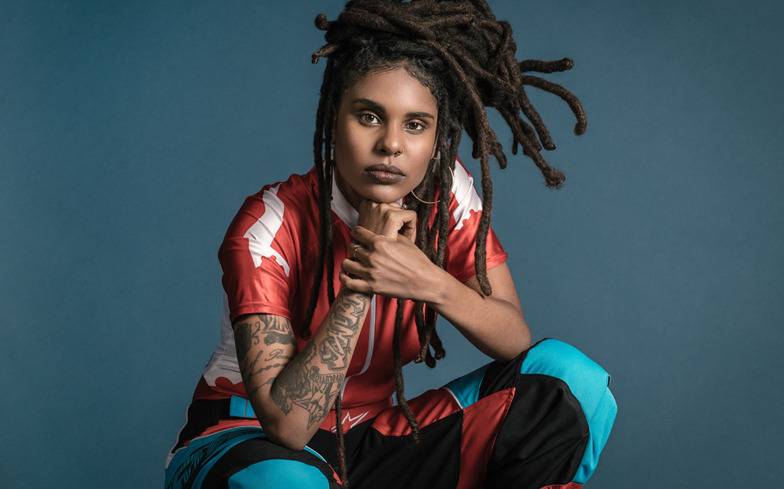 “I think a lot of these people who fear feminism don’t have an understanding of what it means.”

Dope Saint Jude is a woman who doesn’t mince her words. The rap artist and producer from Cape Town, South Africa is a serious advocate for LGBTQ issues, using her voice and platform to support marginalised communities.

Her latest single Grrrl Like takes the Riot Grrrl movement of the 90s and brings it “into a more intersectional and African context.”

It forms part of Dope Saint Jude’s new five-track Resilient EP, which will be released on 2 November.

Gay Times caught up with the star to talk about why a feminist anthem like Grrrl Like is much needed at the moment, the challenges she’s faced performing as a queer artist in South Africa, and why she decided to quit her former career of being a drag king.

You’ve describe your new single Grrrl Like as your take on the Riot Girl movement from the 90s. What inspired you to look towards that movement and create music for an audience in 2018 around it?
The Riot Girl has been quite significant to me because it’s punk music that resonated with me. It was these groups of girls who were misfits talking about things that really mattered to me. They were pretty political and they they would speak about feminism and racism. But what made me want to bring that into my work in 2018 is that Riot Girl was pretty much a white feminist movement and I really resonated with it, but I didn’t see myself reflected in it. So I loved what they were doing, but there weren’t any black girls doing Riot Girl. Because I come from South Africa, I wanted to bring it into my context. It’s about giving Riot Girl the respect that they deserve, but also making it more relevant to my reality.

What has the response been like?
I’ve been getting really great feedback. It really resonates with people because it’s often black girls want to be punk, but it never seems like there’s room for us. So it’s been refreshing to have something that is punk and ‘fuck you’, but isn’t your traditional hip-hop either. I’ve been getting a positive response from people I consider my fellow misfits!

Considering recent political events across the globe, it feels that this feminist anthem to empower women is what is needed.
Yes, definitely. If we look at things happening all over the world, I could talk about Trump, I could talk about stuff happening in my country, we could talk about the incident with Serena Williams. It’s so important that we resist, because it felt like for a long time we were making progress as a society. But suddenly now it feels like we’re taking a step back, so I guess this is in resistance to all of that bullshit that is happening.

Do you think music – especially in the mainstream – lost its power to be used as protest?
It is pretty disheartening to see that the artists that are being encouraged and music that is being pushed… I mean, while it’s really great to dance to – I’m not going to lie, I love Ariana Grande – it’s kind of sad that we don’t have music that stands for something. Music is a really important tool to connect people – especially from across different backgrounds. I’m hoping that there is a kind of comeback. Unfortunately I think we’re in a moment where musicians kind of have to work as entrepreneurs and work with a capitalist society, which sometimes goes against the principals of punk. But there’s room to redefine what it means to be punk in the moment that we’re in now. It’s about how you work with these big corporations and use these platforms to further your cause.

What’s your response to men who still feel threatened by the concept of feminism?
My honest response is ‘fuck you!’

That’s a good response.
[Laughs] My response is just read a book and go get an education. A lot of fear comes from a lack of knowledge. I think a lot of these people who fear feminism don’t have an understanding of what it means. It’s upsetting to me that men feel excluded from feminism. Men can be feminists too. Anyone can be a feminist. I really encourage people to educate themselves because it shouldn’t be a girls-only club. I don’t advocate for that either. It’s something we all should be talking about. Also, speaking about and understanding the trauma that the patriarchy puts women under. Often in feminism we focus on the suffering of women, but there’s also a lot of suffering that men go through at the hands of the patriarchy – being socialised in a certain way, being told that their feelings don’t matter. We should have a conversation around those things, and I really hope I can open a dialogue up around that.

It comes back to breaking down that toxic masculinity that still exists.
Yes, we should all be having this conversation. It’s like race, for example, shouldn’t be a conversation only had by people suffering. It’s not just black people’s issue, it’s all of our issue. Trying to dismantle the patriarchy isn’t just a women’s issue, it’s everyone’s issue.

What can fans expect from the rest of the EP?
I think they can expect pretty explosive music in terms of being sonically quite strong. The production is pretty heavy. If you listen to Grrrl Like it’s got quite a heavy bass. In terms of the content, it’s pretty much a reflection of where I’m at right now. It’s honest and it’s a reflection of not only being a South African girl, but a global kid. Like a kid of the internet – consuming a lot of information and then spitting it out in the form of this EP. Making music as a South African, you kind of don’t have your national identity tied that much into your art anymore because we grew up with the internet, and we have so much access to so much knowledge that we’re kind of a hybrid of where we come from, but also a kid of the world.

What is it like operating as a queer performer in South Africa?
To be honest, my experience is actually much better on this side of the world. In South Africa it’s all pretty new. Our society is pretty conservative, even though we have the most progressive rights when it comes to queer people. But as a society we’re still quite conservative, so often by virtue of being queer and out about it you’re seen as controversial. In South Africa I get booked for a lot of queer festivals, whereas elsewhere – especially in Europe – I’m booked for music festival regardless of my sexuality. Are attitudes towards LGBTQ people in South Africa changing?
Yes definitely. There are a lot more queer people visible in the media. It depends where you are in South Africa. If you belong to the privileged group of people who move in the more affluent spaces, then queerness is a lot more accepted. But if you come from poorer areas, queer people are still murdered for being queer. So it depends where you find yourself. I guess it’s the same everywhere in the world. Queer people tend to move to cities and the more affluent, busy, cosmopolitan areas because it’s the safest space.

That’s where being a visible role model for LGBTQ youth plays a part in changing those attitudes.
Yes, and that’s something that I’m still negotiating and navigating – how to exist as a visible queer person, but not having my queerness be a defining factor or defining part of who I am. I feel like it’s such a fine line to walk because you don’t want it to be like the only thing that gives you relevance and importance is my queerness. It’s be like, ‘I have long hair, I am black, and I am queer.’ Those things make up who I am, but they don’t define who I am. At the same time, because there are so few visible queer people it has to some extent be like a defining thing. The media is set up in such a way that is has to be a defining element of who you are.

You are a former drag king, so why did you decide to give that up?
I haven’t done drag since I started performing as Dope Saint Jude. I started doing drag because Cape Town has a really robust drag queen scenes, but there weren’t any drag kings. I just thought I would start it up, but after a while I found that it was pretty one dimensional in my experience. Particularly as a drag king because I think the art of being a drag king hasn’t been explored to the extent that drag queen art has been explored. I didn’t feel like that was something I wanted to do anymore.

We’ve seen drag explode in recent years and become big business, but that’s not necessarily been the case for drag kings. Why do you think that is?
I don’t know. Maybe because the performance of dressing up as a woman offer a lot more glamour and excitement. It’s just a lot more fun and awesome. I mean, a woman dressing up as a man can be exciting, but I don’t think it offer the same level. I also think it has a lot to do with the dynamics of the queer community where gay men tend to support more. Gay clubs thrive more than lesbian clubs. Lesbians just want to sit at home and watch movies! Gay men go out and they want to see a performance, so I think that’s why drag queen performance has exploded more than drag kings. It’s a lot of different factors coming together.

So with this EP being released in November, are you going to be touring the music across festivals next year?
Yes, I’m going to be doing the UK and Europe, and then hopefully an African tour. A lot of planning goes around an African tour. As a queer artist, you have to think about where you’re accessible, where people want to book you…

Where would you like to tour in Africa, because as a queer artist you’d have to be careful about where you perform?
I’d love to go to Nigeria. I’d love to do all over to be honest. I haven’t put my mind there yet because a part of me thinks it’s a bit impossible as a queer artist to do a proper tour of Africa.

Just to quickly touch upon Africa, do you think the way LGBTQ people are treated across the continent is going to change anytime soon?
I think there will be a change, but I also believe it’s going to be quite slow. I think it will be a result of time. It’ll be seen as giving in more than a step being taken to change something. I don’t feel like there’s a strong movement to decriminalise homosexuality across Africa. If it does change, it will be a slow, giving in kind of change. Having said that, I really do take my hat off to people in Uganda who year after year have Pride. In Uganda, people are murdered for being gay, so I can’t imagine what it must be like to exist in those spaces.

Dope Saint Jude’s Resilient EP will be released on 2 November. You can download and stream her new single Grrrl Like now.