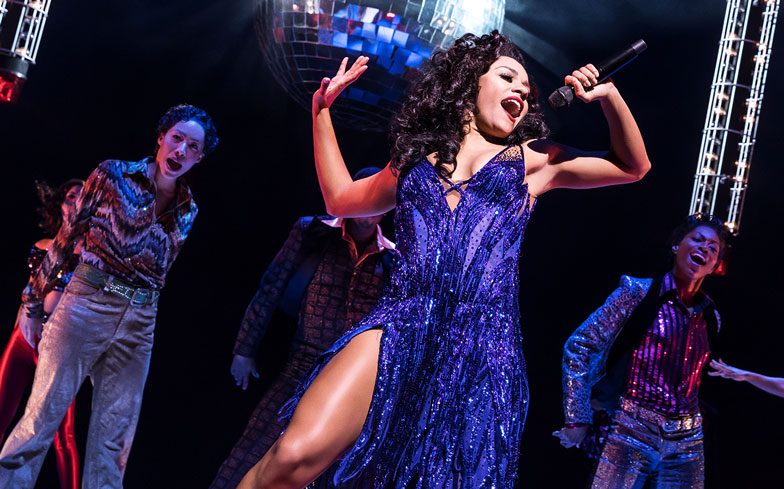 Given some of the scathing reviews, I was expecting Summer: The Donna Summer Musical to land with the thud of a disco ball on Studio 54 demolition day.

Critics have carped about weaknesses in the plotting, the glossing over of more troubling or troublesome aspects of the Queen Of Disco’s life, the usual jukebox musical crime of shoehorning songs into the narrative, even the fact that all but a couple of the roles, female or male, are played by women.

Imagine, then, my joy in discovering that Summer – currently playing at the Lunt Fontaine Theatre on Broadway ahead of what will surely by a UK transfer – is a sizzling yet thought-provoking show where Donna’s rise to fame as a sexually-free female artist of colour is boldly told in a format that’s as innovative and thrilling as songs like Love To Love You Baby and I Feel Love where when they first stormed the charts in the 70s.

Those songs have endured, as have Bad Girls and No More Tears and On The Radio and Hot Stuff and, of course, the almighty anthem that is Last Dance – which brings the show to an ecstatic close after a breathless 100 minutes. What other jukebox musical can boast such a fantastic soundtrack or a trio of leading ladies as fabulous as Storm Lever, Ariana DeBose and LaChanze as Duckling Donna, Disco Donna and Diva Donna respectively?

The conceit of writers Colman Domingo, Robert Cary and Des McAnuff is to frame it as a sort of concert with the various Donnas telling Summer’s story from her early days as a church singer through her legendary collaborations with Giorgio Moroder to her struggles with fame and drugs, her conversion to Christianity, some ill-judged career choices and her sad death from cancer at age 63. And yes, her supposed homophobic outburst, which alienated many of her LGBTQ fans, is addressed and redressed.

If anything the show could have used another 30 minutes to go into greater depth, but there’s no glossing-over of anything here and the use of a mostly-all-female chorus chimes brilliantly with Donna’s trailblazing efforts for artists in particular (standing up for her rights when basically told to just shut up and sing) and women in general (as embodied in the stirring salute to the female workforce that is She Works Hard For The Money).

And the songs aren’t shoehorned in, they blend seamlessly with the story. As a life-long Donna fan, I was thrilled by the inclusion of lesser-known album tracks, proving that the show’s makers have more on their minds than just an easy cash-in. And when Last Dance rolls round at the end it’s like being back at Studio 54, a soaring celebration of Summer’s legacy as one of the greatest divas of all time.