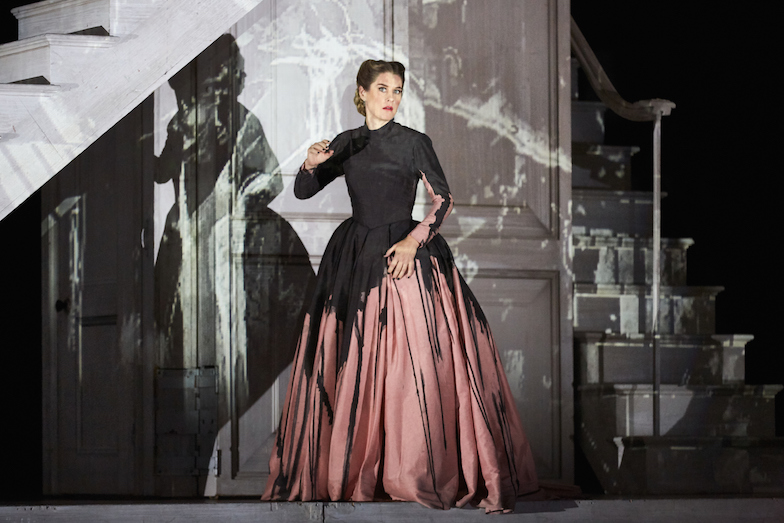 This opera tells the story of the titular Don Giovanni, based on the fictional libertine and seducer Don Juan. Over the course of two acts we witness a variety of encounters with women who he deceives then leaves; we then see his former lovers and his formerly-loyal servant conspire to work against him. For this production, Hartmut Haenchen conducts Mozart’s glorious score, with libretto by Lorenzo da Ponte.

It’s a visually spectacular and compelling revival. The staging is really quite a sight to behold; it’s a big, busy and complicated set, making full use of the Royal Opera House’s revolve, but it works extremely well and allows for plenty of dramatic and comic moments. It looks seriously impressive, with a cartoon-like hand-drawn aesthetic in places, and some smart use of Luke Halls’ video design to convey movement. The visual spectacle would be for nothing if it wasn’t underpinned by some seriously impressive singing, of course; thankfully, this production boasts numerous fine performances.

Erwin Schrott is believable in the title role; this long-haired Lothario is charming and repulsive in equal measure. His eventual disintegration succeeds because we see him eavesdropping on his victims’ arias, gradually learning more about remorse, eventually breaking beneath the weight of his guilt. Roberto Tagliavini is entertaining as comic servant Leporello, while Myrto Papatanasiu seriously impresses as Donna Elvira. Evidently struggling with conflicting emotions, she is afforded plenty of opportunities to showcase her vocal prowess, especially in the second act.

This production of Don Giovanni gets a lot right. We would caveat this by saying that it’s not an entirely accessible production – it’s three-and-a-half hours long and sung in Italian (there are surtitles of course) – so it won’t be everybody’s idea of a great night out. But it remains a strong production of a classic opera in a stunning setting – one we’d gladly recommend.