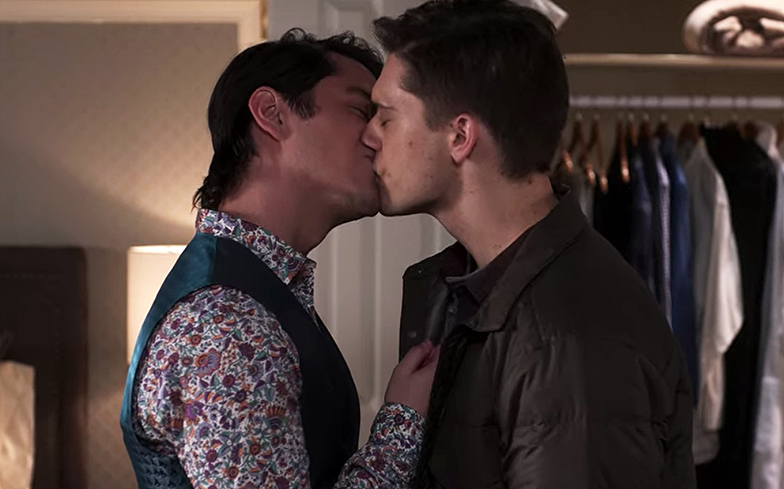 Dolly Parton continues to show love for the LGBTQ community.

The country music legend has just released her new Netflix anthology series Heartstrings, which tells eight stories about family, love and faith, with each episode based on one of Dolly’s most iconic songs.

Two Doors Down follows Tyler (Broadway star Andy Mientus) as he attends his sister’s picture-perfect wedding with a secret – he’s in the closet and in love with his overbearing mother’s assistant Cole (GBF’s Michael J. Willett).

As other secrets begin to unravel, the wedding becomes a nightmare for Tyler’s mother, and a dramatic coming out scene threatens to tear the family apart. Of course, this being a Dolly Parton series, there’s happy endings all round.

There’s even a non-binary character, who helps educate their family (as well as viewers) about gender identity.

It’s slightly unexpected to see a same-sex couple in the show, especially given the large conservative following Dolly has. In fact, according to NewNowNext, there were walkouts during screenings of the episode at Dollywood.

“I was told that Dolly herself wanted to do an LGBTQ-inclusive episode based on the fact that she has such a universal appeal,” explained the episode’s screenwriter, Mark B. Perry.

“Her fan base crosses every demographic, and you stand side-by-side with people you might not socialise with at a Dolly Parton concert.

“She was involved in reading [plot] outlines and so forth, and it was really a phenomenal experience. I have to say it’s a lovely group of people – very supportive, and quite a lot of fun, too.”

Dolly Parton’s Heartstrings is available to stream on Netflix now.