Doctor Who: 5 ways Twice Upon a Time was double the fun 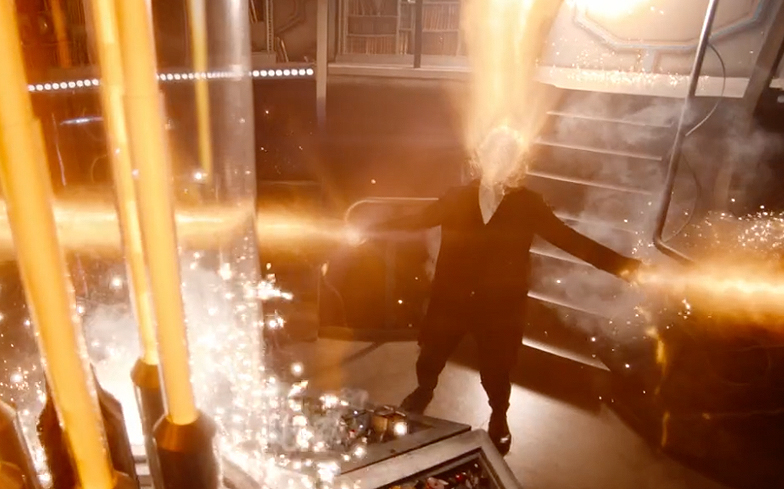 Twice Upon a Time (from now on: Twice) is not just another episode. This is not because of the quality (or lack thereof) contained within its 60-minute runtime, but its position within the series’ 54-year history.

It’s the end of many eras, and the start of a handful more. It’s Peter Capaldi’s swansong, the oldest and trickiest of the New Who Doctors, as well as both of his trademark eyebrows.

It’s also the final bow of Mr Steven Moffat, having steered the ship since casting a fresh-faced unknown named Matt Smith in 2010. But has he crafted a fitting capper to his tenure, or is Twice, with its duo of Doctors, a double disappointment for this divisive figure?

Of course, whilst some doors close, others swing wide open. Jodie Whitaker’s casting caused a firestorm in July, and much to the chagrin of those fans who took against her, she makes her first appearance in the dying minutes of Twice. And with the Moff’s departure comes his own regeneration of sorts… into Broadchurch scribe Chris Chibnall.

This Scooby Doo style coming and going would be more than enough for most episodes, but Moffat also throws in the First Doctor, played by the excellent David Bradley, as well as Mark Gatiss’s close-to-death WW1 soldier, and Pearl Mackie’s Bill returns.

This is a daunting number of balls for Twice to juggle (and if anyone knows that feeling, it’s the good people here at Gay Times), but does it succeed? Strap yourselves in for our take on the five biggest talking points of this era-ending adventure.

As stated, Twice had more on its plate than your nan’s Christmas dinner when accounting for second helpings. We pick up with Twelve in the snow, refusing his regeneration and meeting his younger self, the First Doctor, who’s also refusing to change. Time stops around them as they meet a WW1 soldier who too finds himself adrift.

The answer lies with the Testimony, which removes people from their timelines moments before their death to create copies of them. Bill’s copy surfaces, which means the real Bill must be dead, we think – although this thread is more than a little unclear, and the moments-before-death shtick is fitting, if a little heavy-handed, given the Doctors’ imminent mortalities.

The quest to discover the source of the strangeness is reasonably compelling, but ultimately poses more awkward questions than answers, and the solution is another variation on Moffat’s beloved ‘everybody lives’ trope. The plot meanders at a leisurely pace, frequently stopping to dissect the nature of mortality among other things, and though always well-written, this self-reflective note grows stale; there’s a couple of big speeches too many, and when Capaldi’s parting soliloquy comes, we’re a little drained. For such a stellar Doctor, that’s a sad farewell. Luckily, the actors’ expert handling of the material mostly redeems it.

Twice sees Steven Moffat bow out after six series at the helm, and it’s impossible to deny that the show is now a very different beast to that which Russell T Davies bequeathed in 2010. Where Davies’ Who was a crowd-pleasing action adventure, Moffat’s has been a more cerebral affair, interested in looking backwards, poking the show’s long continuity and stretching its rock-solid format to breaking point. Love him or hate him, Moffat’s best episodes are some of the strongest ever, but his decision to make Doctor Who less straightforward has come with a cost: ratings.

If you’d already made up your mind about Moffat, there was little here to change it: Twice is a standard Moff script – he’s most comfortable writing people standing around taking the piss out of each other, and that’s present and correct here. Meanwhile, his classic clever-clever tropes – meta-gags about the size of the TARDIS windows, arcane references to events and characters decades old, and self-referential asides about the Doctor’s sonic screwdriver – abound.

Whilst a scene involving a Christmas Day armistice feels a little too calculated to bring the tears, the Doctor’s final, quiet farewell with Bill and Nardole (oh, Nardole!) was real enough to turn our hearts to mush, and reminded us that when he calms down and controls his worst impulses, Moffat is a brilliant writer, and the show was lucky to have him.

3. One is the magic number?

David Bradley’s First Doctor grabbed more of the headlines in the lead-up to Twice than Capaldi himself, and from Bradley’s crochety dressing down of everyone he encounters to his lapel-grabbing shenanigans, the man is every inch a worthy successor to William Hartnell – and he’s often very, very funny. He probably even speaks for many long-time Who fans when he derides those bloody sonic sunglasses (what were you thinking, Steven?). He also faces a crossroads not unlike that of our Doctor: whether to allow change with regeneration or stop it dead in its tracks and simply die.

Thematically, his presence in Twice, a story of the almost dead, makes perfect sense. But when you consider that this is Peter Capaldi’s farewell appearance, Bradley’s presence becomes problematic. No other Doctor, in their final story, has been made to share the screen with a predecessor, and it’s hard to rally behind our hero when there’s another one, box fresh, lurking around.  Bradley’s performance is fine, excellent even, but it’s his very inclusion in the story that just may have been misjudged.

Speaking of misjudged, Moffat’s ongoing gag of One’s political incorrectness must surely rank with the aforementioned sonic shades, or River Song’s innuendo-laden dialogue, in his poorest creative choices.  He mistakes his companion for a cleaner and threatens Bill with a ‘smacked bottom’. The conceit makes awkward viewing, and little sense: the Doctor’s an alien from the future – why would he have any concept of the petty prejudices that Bradley’s Doctor espouses?

Peter Capaldi was born to play the Doctor, and Twice sees him putting the finishing touches to the lovable, if spiky, adventurer he crafted so successfully in Series 10. Capaldi’s performance brings the Doctor full circle, from his volcanic anger at his regeneration in The Doctor Falls to the quiet acceptance, and relinquishing of life, that slowly takes hold of him here. While the story doesn’t quite gift him the world-ending adversary that previous Doctors (Eccleston, Smith) grappled with in their swansongs, the sombre scenes of mud-soaked Ypres make for a much quieter final stage.

It’s easy to forget the backlash that greeted the 56-year-old Capaldi when he was chosen for the role in 2014, after the pretty boys of Tennant and Smith had pretty much defined the Doctor for an entire generation. But across his three seasons, he’s developed his Doctor to the point that he now firmly resembles the hero we love – no other Time Lord has undergone quite such an evolution as Twelve, and for that, Capaldi deserves special credit.

Speaking of credit… how about THAT final scene? As mentioned, his departing address to the TARDIS, to the audience and to himself is slightly weakened by the presence of so much portentous dialogue proceeding it, but Capaldi, stalking around the console for the final time, still makes it count. ‘Laugh hard. Run Fast. Be Kind.  Doctor… I let you go’ he says, and, to paraphrase a former inhabitant of that box, we don’t want him to go. But go he must.

WHOOSH! Twelve throws back his head, disappears in a maelstrom of golden light, and in his place stands a young, blonde woman.

So many angry words have been spoken since that fateful July day when Jodie Whitaker was unveiled to the world as the Thirteenth Doctor. Many had imagined the dying moments of Twice, when the first female Doctor was born, would probably cause the Earth to spin off its axis and the human race to be driven underground. Others thought our species would enter a new, worldwide period of acceptance and equality, unparalleled in human history, and all wars would instantly cease. Neither of these scenarios came to pass, but on Twice’s evidence, we now know one thing to be true: Jodie Whitaker is the Doctor. She’s just… the Doctor. Every bit as much as the twelve gentlemen before her.

The way she stares into the TARDIS screen with a startled ‘what just happened?!’ gaze, the way she utters her first line with a boundless, distinctly Yorkshire enthusiasm (‘Aw… Brilliant!’), even the way she loses control of her TARDIS (yes, HER Tardis), in the same way as her hapless newborn predecessors Ten, Eleven and Twelve, tells us everything we need to know: we’re in safe hands here – and the Doctor’s still very much in the house.

‘Time to leave the battlefield…’

Twice is an odd duck that closes off the Moffat/Smith/Capaldi era that began seven years ago with quiet introspection rather than bombastic flair. In many ways, it feels more like the flicking on of the lights at the end of the party to The Doctor Falls’ final, ecstatic spin on the dancefloor. It probably bites off a little too much more than it can chew, with Bradley’s First Doctor, Gatiss’ presence, Bill’s reappearance and Capaldi’s parting turn all jostling for space in a barely extended 60-minute runtime, and the elements don’t quite sing together in the way that they should.

It’s tough to escape the feeling that forgoing this closing coda, and leaving on the immense high of The Doctor Falls, would have been more favourable to Moffat’s legacy, but as a flawed, ambitious, nostalgic, crazy, profound and often head-scratching tour of Moffat’s Doctor Who universe, TUAT is an appropriate tribute to his time in charge, and a strong enough send off to a magical Doctor in Peter Capaldi. Season 11 is slated for Autumn 2018. The Doctor’s ejection from the TARDIS here could form the centrepiece of a series-long arc ( whispered about ever since Chibnall was announced as showrunner), or resolved in the first 5 minutes of the new season.

But either way, if Chibnall can streamline the sometimes-impenetrable show that Moffat left behind without junking his thought-provoking edge, he has a good chance of bringing back the show’s spark. Whatever happens, we’ll be on the sofa when that fateful evening comes.

And hopefully behind it too.