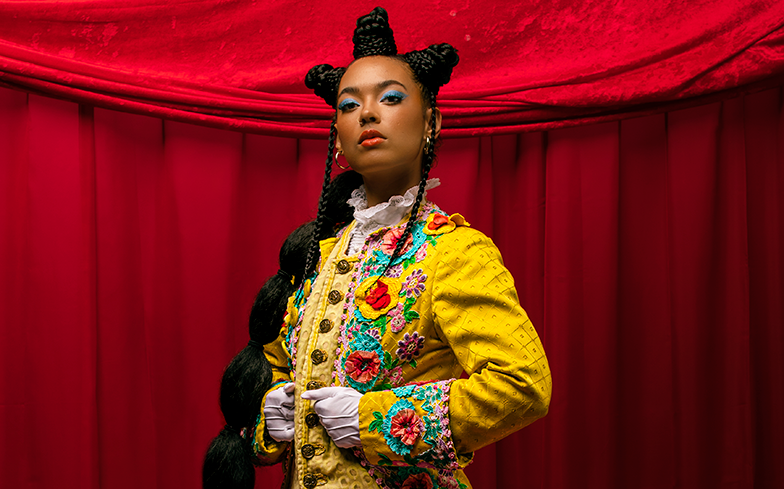 After embarking on a headline tour with Lizzo and receiving high acclaim for her debut project, Free Form, Minnesotan artist Dizzy Fae became one to watch with profiles in major publications such as i-D, Wonderland, Billboard and Teen Vogue (ooh, and GAY TIMES!). This year, Dizzy released her second collection of bops, NO GMO, another eclectic mix of experimental R&B and trap anthems that proves why she’s one of the most exciting new musicians in the industry.

“It’s about time people understand who fucking run the world,” she passionately tells us over the phone. “Girls! Queer people are tight as fuck and POC people are fucking amaze.” We spoke to Dizzy about her evolution as an artist, the importance of touring and why it’s “about fucking time” for queer female musicians to claim the spotlight.

You’ve just released your second mixtape, NO GMO – what inspired the project?
I noticed that I spend a lot of time with myself, so since the last time we talked, I got my own little apartment. Some of the songs on GMO were old songs that have been refined, maybe two-and-a-half years. So there’s a few songs that describe different times of my life. I spent a lot of time with myself and I think my music really reflects that. Music is a form of expression for me that I treat my soul to. With music, there’s so many things you can do and I just want to be able to explore that in my entirety.

NO GMO feels more eclectic than your first mixtape, Freeform – is it important for you to reinvent yourself with each project?
I don’t know if GMO is a reinvention, it’s more of an evolved version of myself. It feels like GMO is a much bigger body of work than Freeform and the older sister, the mentor. That’s what we want to see from every artist, an evolution, sharing their journey. I know that I have a journey that other people can hop onto, so the vulnerability in that and allowing people to be a part of that is what makes me keep going. We all want something we can grip onto as an artist, because all we do is watch them on our phones, listen to their music and it feels like we’re a part of their life. My life is building, I’m really starting from the ground up with this shit. Would you say you’re quite spontaneous with your work then?
I think with anything I’m passionate about, I’m not someone… I don’t like to pressure myself into getting something done. I feel like I don’t get the most authentic me out of that process, but I do like the hustle and I like the pressure. The initial idea of anything, I just like to flow out of me. I am a very spontaneous person, I can get shit done when I need to get shit done, but if I know the best me is going to come out of it, I’m going to take my time. All we got is time!

You’ve been touring since 2016 – how would you say you’ve grown as an artist since then?
When I watch people perform, I really watch them perform. People don’t really perform nowadays. I’ve been really blessed to meet people who really do perform like Lizzo and Kehlani. Not everyone puts in work for their performance. When I watch a performance, I watch the whole performance. Like, ‘How are the lights looking? Cool. How are they dancing? Are they dancing? How do they sound when they dance? What are they eating? How are they keeping their energy up? When did they get their period? How did they handle that?’ Shit like that. I study, because performing isn’t easy. I’m trying to do this the rest of my life so I need to know the best way to do it, because I need to be 30 on a yacht with all my homies, not even laughing at jokes, just laughing at the air.

As a queer person and as a person of colour, do you feel like you have a responsibility to represent both of your communities?
Absolutely. It’s one thing to acknowledge your platform, but it’s another thing to be about it. I’m still figuring out the best way to just be about it. I’m realising that I can do that through being the best I can be, so that other people that look like me and are part of my community feel that, like, ‘Oh, she’s doing it, I can do it.’ Something so small like that, being yourself, is big in itself. That’s what I’m trying to be for people, my fucking self, who is loving, compassionate, human. I really like to work with POC people and queer people because they deserve to be showcased. They’ve spent enough time where they haven’t, so let my n***as come up!

Queer females are really killing it at the moment – why do you think it’s happening now?
Because it’s about fucking time. It’s just about time. There’s so many other things in the world that we need to discover. We should’ve been there. I’m telling you, when people are themselves, that shit shines. It’s about time people understand who fucking run the world. Girls! Queer people are tight as fuck and POC people are fucking amaze. It’s just… about time.

Although there are so many queer performers thriving right now, there’s still a lack of LGBTQ artists dominating the charts – do you think this will change?
I mean, Lil Nas X just came out, so… Everyone in my heart and in my soul is queer. I feel like there’s some people in the top ten are maybe just in the closet because of the industry. That’s just me though. I don’t think it’s far behind that people who are out will be hitting the top ten. I know I’m not stopping. It’s going to happen.