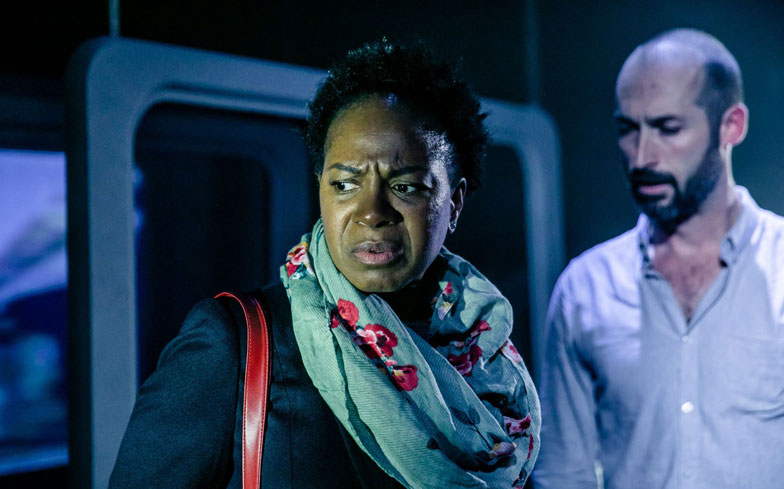 Alex McSweeney’s hard-hitting play has opened at the Park Theatre.

Distance is a new play, developed as part of the Park Theatre’s Script Accelerator Programme during 2016. It is an examination of mental illness and its impact on the individual, their family, and society around them.

It focuses on the life of Steven, who has recently separated from his partner and is heading towards divorce. He bumps into an old friend on the train to Manchester for a job interview; during their conversation, he tries to make sense of his complicated recent past and his new place in the world.

Structurally it’s an interesting piece. In the opening scene we see Steven on what we assume is a roof, contemplating suicide; the subsequent 90 minutes offers a series of flashbacks from his recent past leading us back, at the show’s conclusion, to the moment he decides whether or not to jump. We gain an insight into his relationship issues, his deteriorating professional life, his broken family and alcohol addiction.

It’s a challenging watch – some of the scenes are quite difficult, particularly when Steven becomes abusive while drunk. It’s also painful to see him spiral further out of control. Having said that, it’s all handled with impressive sensitivity – we appreciated that there was very little explicitly mentioned about his mental health issues and that many characters were visibly uncomfortable talking about it. It seemed quite an honest reflection of society’s lack of willingness to confront the illnesses that many people face.

We weren’t completely sold on the set design. While the moving tables, chairs and windows worked well to create new spaces and a feeling of distance, separation and isolation, they seemed overused and unnecessary on occasion – we felt they would have been more effective if utilised more sparingly.

We also weren’t always convinced by the acting throughout. Abdul Salis was strong as old friend Alan, while Doreene Blackstock, given her limited stage time in a number of supporting roles, shone brightly throughout. The other characters, however, seemed to plateau at quite an early stage and we would have liked to have seen more development of them over the course of the show.

Distance is a challenging play and won’t be to everybody’s tastes. While we felt it had a few shortcomings, however, there’s still plenty here to recommend and it’s certainly an intriguing exploration of mental health.