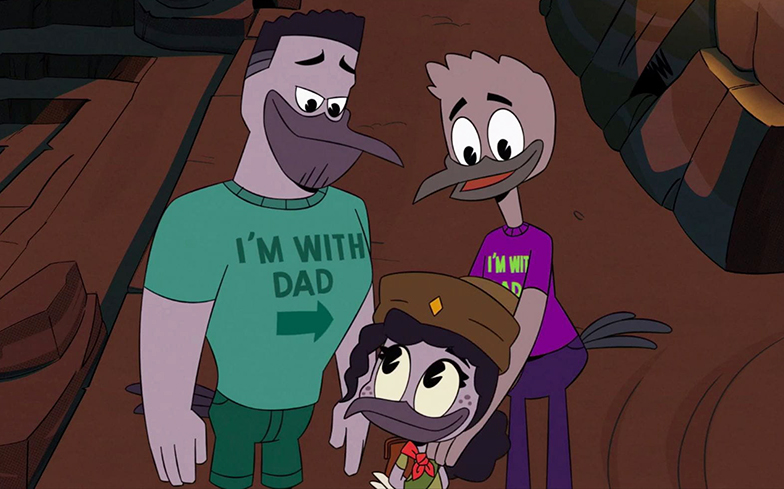 The third season premiere of the beloved animated series, which was recently revived on DisneyXD, revealed that Violet – a classmate of main characters Huey, Dewey and Lewey – has two fathers.

As she celebrates saving Huey’s life and earning the title of Senior Woodchuck toward the end of the episode, Violet is cheered on by her parents who are both adorably wearing ‘I’m With Dad’ t-shirts.

Speaking about the moment in a Tumblr post last year, writer Frank Angones acknowledged that many fans will be hoping for more LGBTQ representation, especially as Violet’s dads don’t have any speaking lines.

“As with all of our characters, we had a lot of conversations about who Violet was and what her background was and came up with this fun notion of her too enthusiastic, overly supportive dads who love being dads,” he wrote.

“We didn’t really have a story built around them, but when the time came for an episode focusing on Huey and Violet in a particular situation, it made sense that they would be there.

“But I’m well aware that the ‘queer representation through parents and background characters’ trope is an issue.”

Frank continued to hint at “specific hoops” that need to be jumped through to make changes to established Disney characters, but admitted they could be doing more with the show.

“We’ve done pretty well on racial diversity and representation of people with limb differences, but we really have not done enough relevant LGBTQ+ representation,” he continued.

“We do have some themes and ideas coming up that address relevant LGBTQ+ narratives. But there’s always opportunity for a lot more; I don’t want a cop out and a cookie for saying, ‘look at this one thing we did!’”