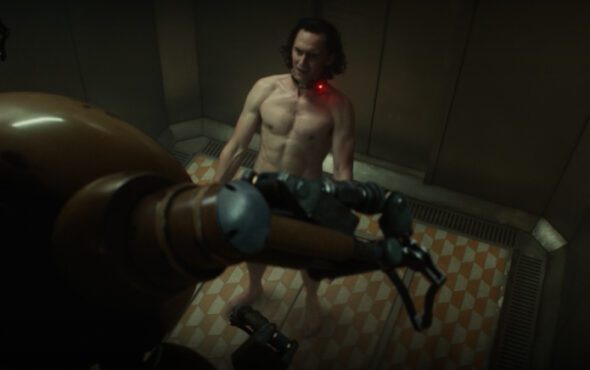 Marvel viewers missed out on the franchise’s first ever queer sex scene in Disney Plus’ Loki series.

According to the brand new Disney Plus special, Marvel Studios’ Assembled: The Making of Loki, the crew of the acclaimed series pondered over whether to include a more intimate look at Tom Hiddleston’s beloved Asgardian trickster.

In the special, Loki’s lead writer Michael Waldron can be seen with a whiteboard filled with notes about potential scenes for the show. Although the whiteboard is messy as hell, Loki stans managed to pick up on two specific notes that would’ve delved deeper into the character’s queerness.

In the third episode of Loki, the title character opens up about his past relationships with Loki variant Sylvie (Sophia Di Martino) and admits he’s been romantically involved with both ‘princesses and princes’ – reflecting the character’s fluid sexuality from the comics.

With this revelation, Loki made history as the first openly bisexual hero in the Marvel Cinematic Universe. Although it was a tiny moment, it was a breath of fresh air for a franchise that has notoriously only centred heterosexual characters and storylines within its roster of films and shows.

It also confirmed that Marvel executives are making good on their previous commitment to diversify their heroes.

look im just saying if they wanna add a sex scene with #loki in season 2 and they need someone to play his partner, I am available for filming pic.twitter.com/6eLSivMScE

Of course, it would have been even better to see Loki engage in some ‘mischievous’ queer sex, but it’s Marvel we’re talking about here so… baby steps.

Speaking with Entertainment Weekly, Herron said the moment was “very important to everyone” and it was “beautiful” for her to be involved with due to her own bisexuality.

Loki takes place after the events of Avengers: Endgame and follows an alternative version of the character who escapes imprisonment from Earth’s Mightiest Heroes and creates a new timeline.

The entire first season is now available to stream on Disney Plus.