Did Strictly’s annual spooktacular continue to live up to high expectations? 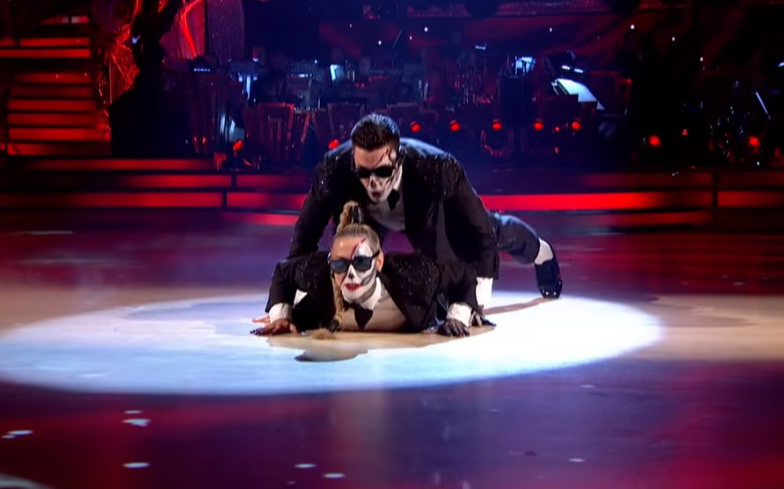 “That was tremendously horrendous.”

This year’s Strictly Come Dancing has been slightly unpredictable. Before the series began, I thought Lee and Vick would be shoe ins for Halloween Week, while Graeme and Seann would fall at some of the first hurdles. And yet Lee and Vick went quite early, while Graeme and Seann have had some high moments and looked like mid-table contenders, until they crashed down again.

Strictly’s Halloween special is generally one of the highlights of the entire series, and this one can go down in Strictly history as one of the better ones, but it didn’t excite me like Movie Week did. Perhaps it was the abundance of slightly duff dances, even if Faye Tozer and Ashley Roberts did set the dance floor alight. And the song choice was a lot better than last year from the deliciously camp Monster Mash, to the old classic Witch Doctor to the simply iconic Thriller. But it was even nicer to see Bruno back and almost immediately start getting catty with Craig again. Forget the dancing these two need to go on a roasting show.

And it wasn’t just Bruno getting catty with Craig that proved to be a highlight of the evening. Craig spurned the audience on to boo Darcey when she was giving a negative critique, and Nicole Scherzinger herself was in the audience to watch Lauren Steadman dance to her own song. That said, she looked incredibly uncomfortable explaining the paso doble to Tess.

Last week, Vick Hope became the latest cha-cha-cha casualty, as she ended up in the bottom two and was voted off of the show. There’s been a lot of talk about a “fix” going on, but while Seann seemed to clean up his routine, Vick was still dancing on bent legs. I loved Vick, but in that dance-off she deserved to go.

And in our poll last week, Lauren Steadman’s emotional and AJ Pritchard’s open-topped contemporary routine won the public vote with 27% of the votes. The rest of the votes were spread far and wide, but Danny John-Jules’s amazing jive and Joe Sugg’s romantic waltz managed to both get 14% of the vote.

Strictly began with an absolute treat of a pro routine, a Mexican Day of the Dead-themed one, but when compared to some of the other pro routines of the year it just wasn’t as memorable. And then Graeme Swann was first to the floor, and it looked like he could become another cha-cha-cha casualty. He can argue that being stiff was all part of the character, but the same defence can’t be used for him seeming to forget the routine in a couple of places and ending up behind Oti. I ended up being surprised that it wasn’t described as a “dance disaster.”

But Stacey Dooley’s tango regrabbed any attention that may have been lost following Graeme’s routine. Although the storyline they had wasn’t clear, Stacey delivered one of the best tangos of this series, and was able to do the male parts with amazing competence. And if she can be trained to do the male parts of a dance, it stands to reason that any female could be taught, so same-sex couples when?

But despite Stacey’s strong routine, Dr. Ranj Singh was unable to keep the momentum going. He looked the part of the most cuddly monster ever, but his footwork was monstrous at best. Although, I’m still wondering why Craig Revel Horwood was sleeping underneath his bed…

And Kate Silverton proved to be another celebrity to keep the show on the down-low with her score. But I actually quite liked the dance, she did better than I expected she would, and I feel that she was undermarked. Unfortunately, although Danny John-Jules’s American smooth scored reasonably well, it wasn’t a routine I thought was great. He delivered it adequately, which is what it seems he generally does when you look at most of his other dances. Competent, but nothing spectacular.

But Ashley Roberts was then able to blow the competition right out of the water. Pasha seems to be the king of charleston on Strictly, even Naga Munchetty’s from a few series back didn’t look that bad, and with someone with the skill set of Ashley they were primed to deliver one of the best performances of the night. They had the best storytelling of anyone on the night, and the dance suffered from no loss of technical skill. Hopefully we’ll get to watch that one again in the final.

Unsurprisingly, Seann wasn’t able to continue that momentum and his Viennese waltz ended up getting slated by the judges, although I felt the score was a bit high considering what they were saying. At least Katya was able to play the role of a toy doll amazingly. And despite the highs of last week, Charles Venn was back with 25 after a few too many mistakes in his jive. But hey, at least it was a really enjoyable performance.

Now, I thought Ashley’s charleston would be the performance of the night, but when it came to Faye Tozer’s jazz routine I was proven entirely wrong. Every snap movement in perfect synchronicity, a dance that perfectly reflected every beat of the music and plenty of show-stopping dance moves made this spectacular in every way. Even if every other couple had been diabolical, this dance alone would be reason to sit through them all.

I just realised that this time last year @officialsteps performed Scared of the Dark on @bbcstrictly can’t believe it’s been that long already!! Now @fayetozersmith is a much bigger part of the show. And doing so so well. Get voting for our faye tonight 😘 pic.twitter.com/EaA80GbkmT

And this time, the next couple was able to keep the momentum going. I didn’t think the foxtrot would suit Joe Sugg, and although I still think the music choice for this dance was wrong, he delivered another beautiful ballroom routine. I know that Joe seems like a Latin dance lad, but if he keeps delivering routines like this, I might end up enjoying his ballroom more.

And then it was time for the final dance, and Lauren Steadman’s paso doble. I was uncertain on having her close the show, as many of her routines haven’t been great, and I didn’t think the paso doble would suit her, but like so many times I was completely wrong. She had the strength and attack to drive the routine, and although I would have liked a little bit more traditional paso in there, this was a routine worthy of the end spot.

Before the show I thought it was absolutely certain that I would be voting for Ashley. I love Pasha’s routines, and find his charlestons to be the best in the business, but Faye’s jazz routine floored me in so many ways that I had to vote for that. Joe’s foxtrot and Stacey’s tango wouldn’t have been wasted votes, and I did feel like voting for Kate as I didn’t think she deserved to be joint bottom on the leaderboard.

And as Faye and Ashley’s performances were the clear winners of the night, you can watch them below.

And as for those who will need to be dancing for their life, Miss Ranjie could find himself there, but as Craig said the kiddie vote might just be able to see him through. Seann will definitely be in the dance-off again and I reckon it could be Kate or Charles joining them. Although Charles isn’t at the bottom of the leaderboard, he wasn’t on the two previous occasions he was in the dance off. As for going home, I think this might be the end of Seann, although Kate and Ranj scored the same, Ranj sounded like he messed up on the night so might be able to deliver the routine to a higher standard, and Kate’s performance seemed to be the more liked out of her and Seann.

And as for who delivered the spookiest performance, let us know who you think did by voting in our poll below.