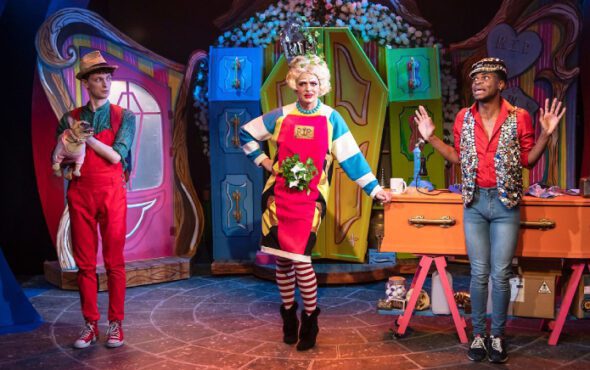 The annual adult panto, written by Jon Bradfield and Matthew Hooper, has opened at Vauxhall’s Above The Stag Theatre, directed by Andrew Beckett.

As winter rapidly approaches, what better way to get into the festive spirit than a delightfully camp panto? In what has now become not only an annual tradition but one of the most sought-after tickets in town at Above The Stag, Jon Bradfield and Matthew Hooper have returned with their 12th adult pantomime. It delivers a wonderful blend of smart and stupid – expect some clever topical jokes and social commentary alongside plenty of plays on words involving the titular Dick.

Early on we’re introduced to our naive hero Dick (Jonny Peyton-Hill) who has arrived to seek his fortune in London, accompanied by his Instagram-famous tracksuit-wearing pug Ariana. He bumps into Alex (Keanu Adolphus Johnson), the son of a struggling undertaker, who believes himself to be the Spirit of London (we are advised it’s an unpaid position).

Completing the five-strong cast are Nikki Biddington as Queen Rat, who is every bit as camp as you want a pantomime villain to be; fan-favourite Matthew Baldwin as the dame, playing Sarah, the undertaker’s under-appreciated wife; and Bradley Walwyn, in the dual roles of uptight undertaker Cyril and his hedonistic twin Cecil – a particular highlight is a scene where he plays both roles at once. 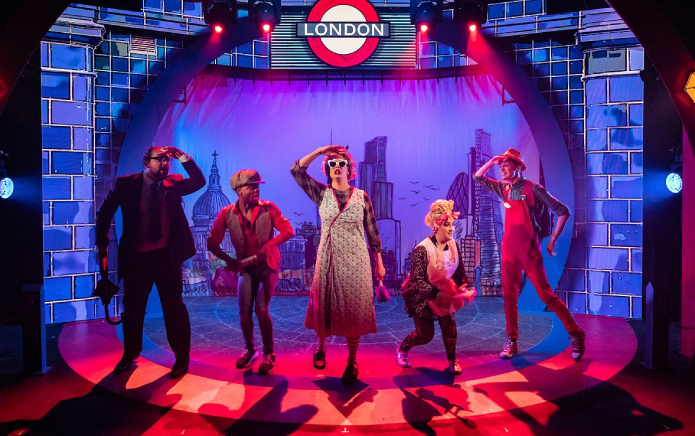 It’s absolutely terrific fun – the cast is superb, the script is tight, the original songs are entertaining. The performers know how to riff off an audience and work the crowd brilliantly; they also relish opportunities to make light of minor malfunctions. Matthew Baldwin is sublime – easily one of the most entertaining dames we’ve ever seen, not just in an adult panto, but in any panto, ever. The jokes have a terrific hit-rate, too – aside from one ill-advised gag about the Alec Baldwin shooting incident, which is both too soon and not funny, everything else lands well. Even the more predictable gags – we could easily guess what the results of a malfunctioning ice cream machine might look like – provided amusing moments.

We had a ball with Dick Whittington: A New Dick in Town. We weren’t expecting anything too big or clever, but were surprised by how smart some of the social commentary actually was… but of course, there’s no shortage of Dick jokes either. All in all it’s a delightfully camp night out and a wonderful way to get into the festive spirit.