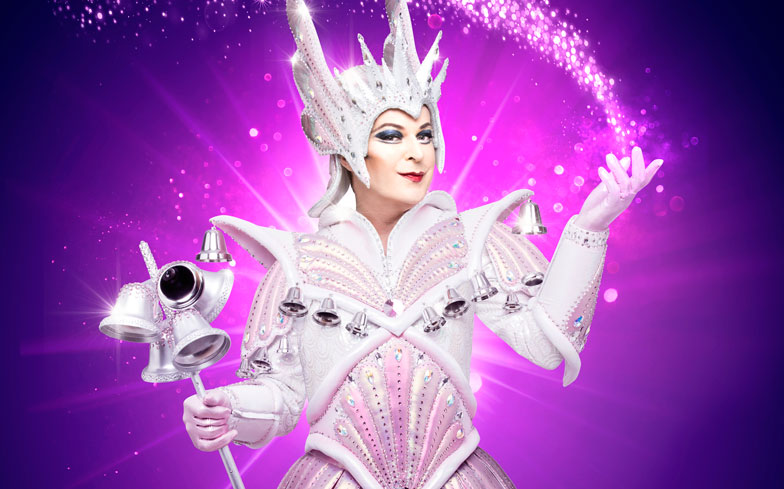 It’s time to get ready for flying fairies and more sequins on stage than you’ve ever seen before as panto season is upon us once again!

The London Palladium will play host to the tale of Dick Whittington and feature a rather festive cast including Elaine Paige, Diversity, Ashley Banjo and West End star Charlie Stemp in the title role.

About to jingle his Christmas baubles on us all as Spirit of the Bells, Julian Clary lets us in on some of the few festive secrets we can expect as the magic of Dick Whittington at the Palladium unfolds…

Related: Tina Fey’s turned Mean Girls into a stage musical and it looks so fetch

It’s panto season once again! How are you feeling about being back at the London Palladium?
Yes, I’m about to enter the black hole of Panto life. I won’t see my friends, husband, dog or home for the next six weeks – I couldn’t be happier!

And this time in search of Dick!
Indeed! Art reflects life, I find. The role of Dick Whittington is played by Charlie Stemp in this production. His dick is full of vim and vigour, I can confirm.

Please introduce us to your rather fabulous character for this year…
I am giving Bella Belmont, the Spirit of the Bells – an ethereal being from another entity. I’ve based my character on Meghan Markle, with a touch of Anne Widdicombe. And it’s a killer cast once again, with the queen of musical theatre at the helm…
Elaine Paige, with Gary Wilmot, Nigel Havers, Paul Zerdin, Diversity and more dancers and singers than you shake a Christmas cracker at.

To be honest, we don’t really need Nigel Havers but he’s useful for the crowd scenes. I shall miss Paul O’Grady, who we had the pleasure of last year. But on the up side, it means we won’t be tripping over the empty cider bottles in the wings!

Have you worked with Elaine before?
Oh, yes! We did an old time music hall show together in 1952 called Get the Meat Balls Out Mother, We’re Coming to a Fork in the Road.

The Palladium launched Panto back into the mainstream London theatre market last year with Cinderella. Why do you think audiences have been so desperate for its return?
I don’t have much to do with the general public so I can’t really speak on their behalf. I understand they like to wear man-made fibres and eat burgers.

Does the critically acclaimed success of last year add the pressure for this year or is it welcomed?
The opinion of a few crusty old hacks doesn’t bother any of us seasoned thespians. The punters are what matters: as long as we get the clap we so richly deserve, we’re happy. And you get to wear heaps of fabulous clothing this year. Can you let us in on any sparkling outfits?
I’ve gone minimalist this year. Just a leopard skin loin cloth in Act One and a diamante merkin for the finale!

The LGBTQ community have a huge love for pantomime. What makes it so great for gay men? Could it be the sequins and cute boys..?
The Palladium is very handy for Soho. The show will give the gays something to do in the early evening before the crystal meth kicks in.

It’s been a while since a brand new tale found itself to the panto stage. If you could make any person or story into a stage tale, what would it be and why?
The American president is an obvious choice for a baddie but I can’t think of a role evil enough for him.Thinking about it, maybe we could cast him as the Sleeping Beauty. He doesn’t have the looks, (let’s face it) but at least the world would be a safer place, for a while at least.

More information on Dick Whittington at the London Palladium can be found here.