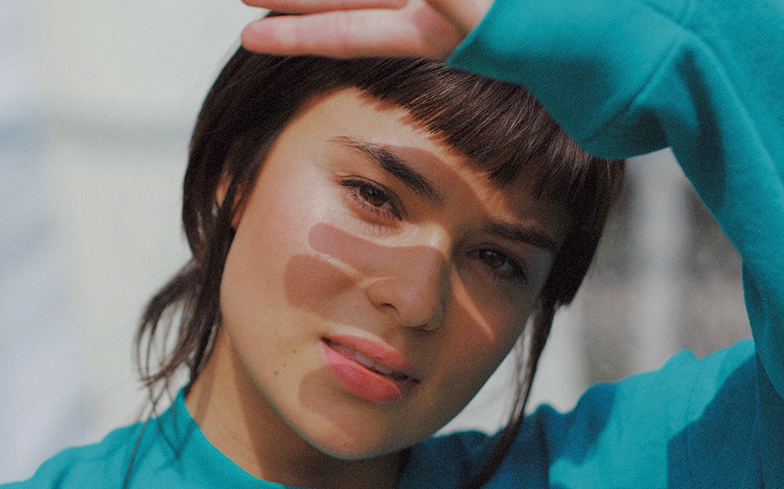 “There’s been nothing but misrepresentation in film since the beginning of time.”

Canadian actress Devery Jacobs is currently starring alongside Ricky Whittle and Ian McShane in Amazon Prime’s lauded fantasy drama, American Gods, as fan-favourite character Sam Black Crow. Sam is two-spirit and Indigenous, and it’s a role she hugely identifies with – and can play authentically – because she is a queer Native American and hails from the Mohawk Nation.

“I never thought I would be able to have these different parts of myself and see my two communities come together within a role,” she tells us, before explaining the importance of authentic representation: “Anybody can play an idea of what they think a queer person might be like, they can create an idea of an Indigenous person’s experience, but unless they’ve been through it first-hand, they’ll lack that authenticity and truth.”

Although Devery has received acclaim in the past for her work as an actress (Rhymes for Young Ghouls) and as a director (Stolen), this year has finally seen her break through the mainstream. She also stars in Netflix’s original series The Order as Lilith Ballory – a member of the Knights of Saint Christopher. We caught up with the star and discussed the importance of authentic representation and why she’s drawn to powerful female roles, especially Sam, who Devery says has “never been done on mainstream television”.

You play a queer Indigenous character on American Gods – what do you think it means to have this kind of representation in mainstream media?
I never thought that I would be able to have these different parts of myself and see my two communities come together within a role, especially not one the size of American Gods. I hugely identify with Sam Black Cow because she’s also really sarcastic and funny, and she’s such a three-dimensional person. I hadn’t really seen a modern Indigenous character represented like that. For the most part, you always see old Native characters like Pocahontas. It’s like, ‘No, we’re still here and we have cell phones and we’re on Twitter like the rest of everybody.’ But it was a character I was hounding my agent to make sure that I was seen for. It was a crazy process for me to get cast in the role. I lost it, wrote a letter – it was madness! Sam is from the Cherokee Nation, whereas I’m from the Mohawk Nation, but there are a lot of similarities between our different Native cultures and the experience we lived. So to be able to bring an honest perspective to it as a Mohawk woman and a queer identifying Mohawk woman… it’s never been done on mainstream television before. How important do you think it is for studios to hire actors that reflect the roles?
There’s been nothing but misrepresentation in film since the beginning of time. It’s time for authenticity and hearing the stories from these communities, from the horse’s mouth. Anybody can play an idea of what they think a queer person might be like, they can create an idea of an Indigenous person’s experience, but unless they’ve been through it first-hand, they’ll lack that authenticity and truth. It’s also us controlling our own narrative, which has never been on the table before. I know there’s a huge conversation right now, where people are saying, ‘If someone is straight why can’t they play queer?’ Or, ‘If someone is passable for Native American, why can’t they?’ That’s not the point. We haven’t had these opportunities before. It would be different if we all had the same opportunities, but we haven’t. Now is the time to actually hear from these perspectives and not just appropriate from queer and Native culture.

Have you received any feedback from fellow Indigenous people about your role on American Gods?
I have. I wanted to make sure that we did it properly and I love Neil Gaiman’s writing, but he’s also an English man and isn’t from those communities. So for me, it was integral to bring my truth as an Indigenous person. The queer Indigenous community were overjoyed and there was also a huge movement for me to play this character. On Twitter, it blew up, which I wasn’t expecting. It was a huge relief for me when it aired to see that community that I belong to, that I feel like I’m serving, react that way. It’s my biggest accomplishment from this.

Your character on the show is two-spirit – can you explain what this means for people who aren’t familiar with the term?
Two-spirit is similar to queer, where it’s like an umbrella term. There’s over 500 different types of Native people in North America, different nations with different cultures and languages, and some of those tribes recognise two-spiritedness. They believe historically that if somebody was two-spirit, then they were given a gift from their creator and they were actually held to a higher regard in their society. It’s completely counteractive to patriarchal mentalities. There’s different types of two-spirit, so there’s gender two-spirit, sexual orientation two-spirit. I was playing Sam as sexual orientation queer because she’s from the Cherokee Nation and those were one of the nations that did recognise two-spirit within their culture. I identify as queer, but because I’m Mohawk, we didn’t have that term historically. That doesn’t mean that we oppressed queer people, it just didn’t have its own separate category.

Do you think Hollywood is going to catch up with representation?
I certainly hope so and I’m going to gun for it until it is possible. It won’t help anybody if I give up before I even try. I honestly think that in Hollywood it comes down to money, and now audiences and Native Twitter, LGBTQ Twitter, Black Twitter, all of these social media movements are now standing united in terms of boycotting projects like Rub in the Tug, where Scarlett Johansson was set to play a trans man. I think Hollywood is seeing the power of these communities come together and so they’re forced to tell these stories as a result of it. I’ve grown up in the indie scene and so I’ve always been passionate about telling authentic stories and hearing from perspectives that haven’t been heard before. Hollywood is most interested in making money, but they’re starting to see that they can earn money from the pink dollar by – for example – retelling Elton John’s story. They see the opportunity now to earn income by telling stories from these marginalised communities. As long as we keep supporting and putting our money where our mouth is, that’ll help further support these stories. You worked at the Native Women’s Shelter of Montreal – how did this experience affect your abilities as an actress?
I think it affected my ability as a human in terms of empathy and understanding different experiences, especially Indigenous people and the issues that we face. It was really influential in my work as a filmmaker, because my first film was about the national epidemic of missing and murdered Indigenous women. I had clients who had gone missing, a woman from my own community who was on the list. So my first short film as a writer and director combined my passion for Indigenous rights. I had never gone to theatre school and I never received any form of training, and so I feel like that was better than any training that I could’ve gotten because it was a crash course in life experience.

You also star on Netflix’s fantasy series The Order. Your character on this show, again, is a strong powerful woman – are you drawn to these kind of roles?
It’s funny because these characters are way more badass than I could ever be! I’m not mad at this archetype. If I’m going to be playing the strong, badass woman, then I will definitely not oppose it. It’s way better than playing the meek victim. I do think I am drawn to these roles because they remind me so much of the Mohawk women that I’ve grown up with. But I’m probably the most mild-mannered Mohawk you will ever meet!

What’s next for Devery Jacobs?
I’m now in pre-production of a film that I’ve co-written and that I will be acting in, which I hope will be in a festival circuit soon. It’s a story of two young women and their romantic relationship. One of them is a daughter of a refugee and she’s dealing with him being on his deathbed, and it’s her relationship with a character who is half-Mohawk half-Iranian. She grew up on her Mohawk reserve but she’s come to Toronto to seek out her estranged Iranian father who doesn’t know that she exists. They come across each other and it’s this beautiful romantic relationship, and they deal with the past that affects their present.