Derrick, Nebraska and Nick are a throuple with “zero regrets” 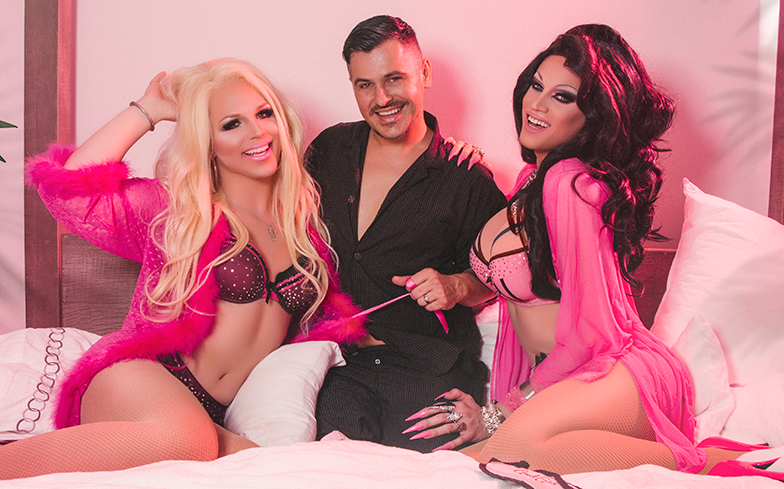 Derrick Barry, Nebraska Thunderfuck and Nick San Pedro are here to debunk the misconceptions of their non-conventional romance.

Derrick Barry, Nebraska Thunderfuck and Nick San Pedro have been in a committed, trinogamous relationship for the past seven years. Because of their high-profile, non-conventional romance (Derrick starred on the eighth season of Drag Race, Nebraska made her drag debut in the show’s fifth season makeover and Nick has worked with stars such as Elton John and Celine Dion), they admit to receiving quite a “varied reaction” from fans.

Among the various questions they face are, ‘Are you in an open relationship? Are you seeking a fourth? Do either of you get jealous?’ The answer is no, to all the above. Derrick, Nebraska and Nick want you to know that they are just like other monogamous relationships, but with an extra person. “It takes no time to judge an unconventional relationship from the outside without having all the facts,” says Nick.

“I think the longevity of our relationship dismantles the ideology that a long-term relationship can only succeed with two individuals.” Here, Derrick, Nebraska and Nick chat to GAY TIMES about how they met, the support from Drag Race fans, and the lack of representation for throuples in the media.

What’s it like being in a throuple?
Derrick: Being in a throuple provides love, support and security, all of the things a traditional monogamous relationship encompasses. In addition, it means having an extra soulmate or team player. I get not one, but two people that have my back and best interest in mind. If there is ever a disagreement between two of us, we have a mediator that can see both sides, be a voice of reason and help resolve the issue. How did your throuple situation come about?
Nick: Derrick and I had been together for five years when Mackenzie [Nebraska] was introduced to us by one of our best friends, Derrick’s ex Justin. We did yoga the night we met, and soon after began hanging out often. Within a couple months, Mackenzie sat us down and asked if he could join us to make it a closed three-way relationship. Seven years later, we have zero regrets.

How do you begin dating when looking for two others?
Nick: We haven’t met other throuples who were actively searching for a third. It happened more organically for us but I am sure people can make anything happen with a vision.

What’s the biggest misconception of being in a throuple?
Nebraska: For us, the biggest misconception is that it’s an open relationship. The fact is that the three of us have been in a trinogamous relationship for over seven years. That means that it is a committed relationship between three people. We never have a fourth and we are not looking for one. So basically, we are like any other monogamous relationships just with an extra person. Another misconception is that there must be jealousy in this type of relationship, but for us that has never been the case. We keep everything very balanced between the three of us. We appreciate and respect the love each of us shares. We support each other in our endeavors, we work as a team to accomplish goals and we celebrate each other’s success.

Some people argue that a throuple dynamic can’t be as fulfilling or meaningful as a traditional two-person relationship. What would you say to those people?
Nebraska: There are heterosexual people out there that say monogamous relationships with two men or two women are not fulfilling, meaningful or even valid. Would you find their statement to be true or would you find that statement to be ignorant? I would encourage people, especially those within our own community, to not repeat the cycle of judgement.
Nick: It takes no time to judge an unconventional relationship from the outside without having all the facts. After seven years, people have questions about what makes our relationship stand the test of time. I think the longevity of our relationship dismantles the ideology that a long-term relationship can only succeed with two individuals. I find that we have had a lot of success as a throuple. I am honored that people have reached out to us from all over the world with questions and relationship advice. It’s my pleasure to help someone else learn through my own unique experiences.

Does the mainstream television world represent the throuple experience currently? If not, why do you think that is?
Nebraska: I actually haven’t seen it represented on mainstream television. We have seen a few movies with different types of throuple relationships like Savages and Vicky Christina Barcelona and I think it’s awesome. They may not be our experience, but not all throuples are the same. Any positive platform and visibility of alternative relationships is welcome.