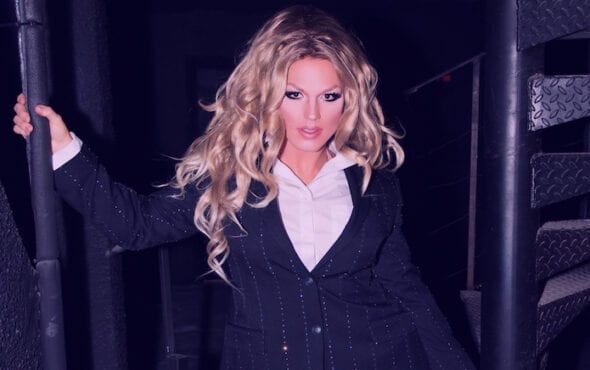 “I hope they can truly accept my apology.”

Derrick Barry has issued an apology to her RuPaul’s Drag Race All Stars 5 cast members.

Although she sashayed away in last place, fans were delighted when the star ruturned to our screens last week for Drag Race: Vegas Revue, a six-part series that provides viewers with a behind-the-scenes look at RuPaul’s Drag Race Live! in Las Vegas.

Ahead of the premiere, Derrick sat down with Decider to discuss the drama-filled extravaganza – where she threw some shade towards her All Stars 5 sisters.

“On All Stars, I think Jujubee said it best – half the cast were some stars. I really felt that I didn’t belong with half of that cast,” she said.

“This cast inspires me, where the All Stars 5 cast, I was looking around and thought, ‘Why am I here?’ I love Shea, I love Jujubee… and so, I would’ve loved to be top three with Shea and Jujubee if it had gone a different route.”

Shortly after the video went viral on social media, Mayhem addressed Derrick directly on Twitter, writing: “Every single one of your cast mates on AS5 is a fucking star… including people you may not care for.

“Sad you would say something like this. It only fuels the bad behavior the toxic fans perpetuates. Be an example girl. Congrats on Vegas once again.”

.@DerrickBarry still had tea to spill about the cast of #AllStars5 when we spoke to her before the premiere of #DragRaceVegas. pic.twitter.com/i8ka7iIUzU

Following a comment from a fan, who told Derrick that she didn’t need to “denigrate the talent of other queens to express a lack of chemistry with some of your AS5 cast mates,” she attempted to make amends.

“You are absolutely correct. I want to apologize to the ENTIRE cast of RuPaul’s Drag Race All Stars 5,” Derrick responded.

“I was defensive and bitter in shading and hurting half of the cast. We are ALL STARS and we were all asked back for a reason to show growth. I hope they can truly accept my apology.”

You are absolutely correct. I want to apologize to the ENTIRE cast of @RuPaulsDragRace #AllStars5. I was defensive & bitter in shading & hurting half of the cast. We are ALL STARS & we were all asked back for a reason to show growth. I hope they can truly accept my apology.🌟💯👑 https://t.co/MApq1aIhS1 pic.twitter.com/UABqbWpxCk

Mayhem replied: “I love you and accept your apology. Families fight and people make mistakes… we’re human. Life is all about learning and growing always wishing you love and success. Can’t wait to see you when the world gets better.”

Watch the first three minutes below.