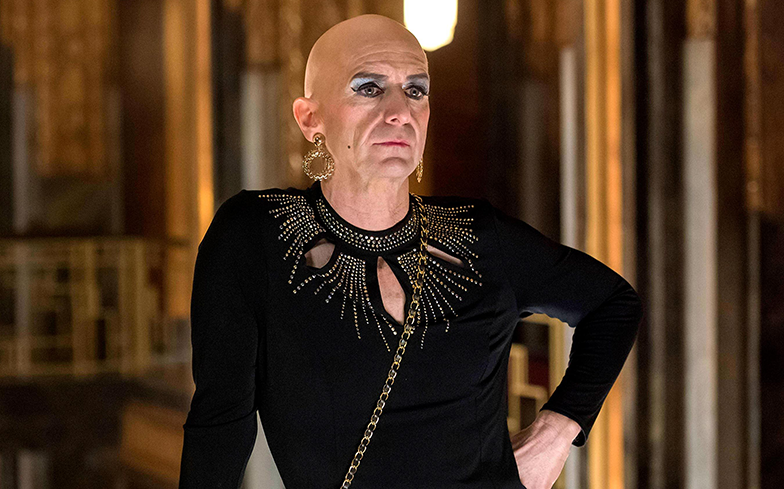 “We didn’t know what the character was when it was written.”

In an interview with Entertainment Weekly, the American actor said it was an “honour” to play transgender bartender Liz Taylor, who worked for Lady Gaga’s character The Countess in the Blue Parrot Lounge at the Hotel Cortez.

“I felt honoured to play this character, and when we did it in 2015, this was sort of the last moment when a cisgendered man could play a trans character or play a female character,” he said of the controversy surrounding cis actors playing trans roles.

“My rationale for that was, we didn’t know what the character was when it was written.”

“Initially I assumed that Liz was a man in drag who maybe had a male counterpart,” he continued.

“As we got into it deeper, we all realised that wasn’t the case… we didn’t know that at first. As the character is growing into her own identity, I’m growing into her identity. It was really interesting.”

Although O’Hare received widespread acclaim for his role in Hotel, he failed to receive an Emmy nomination for Outstanding Supporting Actor in a Miniseries or a Movie. It was seen as one of the biggest snubs of the 2015 Emmys.

The star has appeared in five seasons of the horror anthology series to date: Murder House, Coven, Freakshow, Hotel and Roanoke. He received Emmy nominations for playing Larry Harvey in Murder House and Stanley in Freakshow.

The ninth season of American Horror Story, 1984, aired last week and received praise for providing the show’s usual combination of camp and horror, and for paying homage to iconic slasher films such as Sleepaway Camp and Halloween.

1984 will be the first season without Evan Peters and Sarah Paulson – who appeared as regulars in the first eight seasons – although the latter recently teased that she could “pop up” in some capacity. Read the full story here.

Watch the trailer for the second episode of American Horror Story: 1984 below.