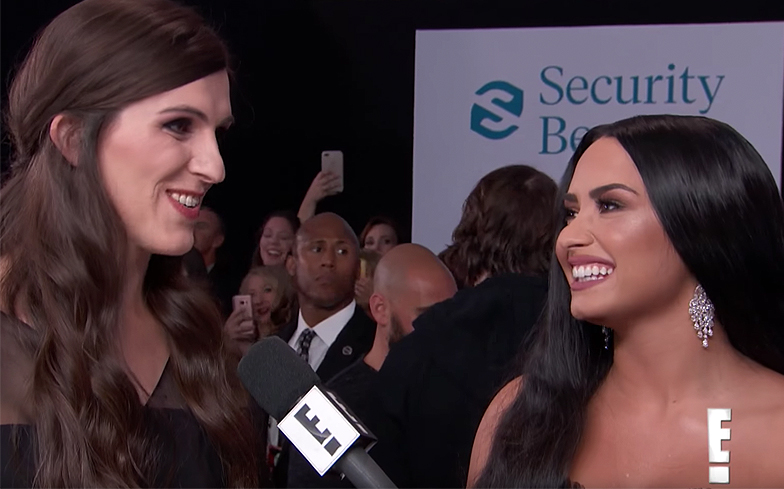 History was made earlier this month when Danica Roem became the first ever openly transgender person to be elected to the legislature.

The Democrat won a seat in the Virginia House of Delegates, taking the position away from incumbent Republican Bob Marshall who has a track record of anti-LGBTQ views.

Last night, Demi Lovato took Danica has her guest to the American Music Awards in Los Angeles, praising the legislator as “groundbreaking”.

“I think what Danica has done is just completely inspirational and she’s a trailblazer,” Lovato said.

“To be a state legislator as a trans woman is groundbreaking and incredible, I have so much respect for her and I wanted to come with her.”

Danica added: “My campaign, I talked a lot about the idea of making Virginia a more inclusive commonwealth.

.@ddlovato and Danica Roem both look STUNNING tonight. I can tell this performance is going to INSPIRE! ✨✨✨ #DEMIxAMAs pic.twitter.com/qI4ug6mwlD

“So no matter what you look like, where you come from, how you worship or who you love you are welcomed, celebrated and respected in Virginia because of who you are, not despite.”

It comes as we head into Trans Awareness Week – as well as marking Transgender Day of Remembrance today – and Danica and Demi joined forces as part of GLAAD’s Together movement.

“Demi Lovato and Danica Roem are two strong and inspirational women who embody the need for all Americans to stand together united and to take action today against any form of discrimination and oppression,” said GLAAD President Sarah Kate Ellis.

“[Her] win in Virginia showcased both how young people and marginalised communities can impact voting results and how every American deserves an opportunity to work hard and achieve their dreams.

“Demi Lovato continues her legacy of raising the bar for entertaining audiences around the world and for spotlighting social issues that need the most attention.”

Last month, Demi opened up about dating “both guys and girls” in her new documentary, which coincided with her latest album Tell Me You Love Me.