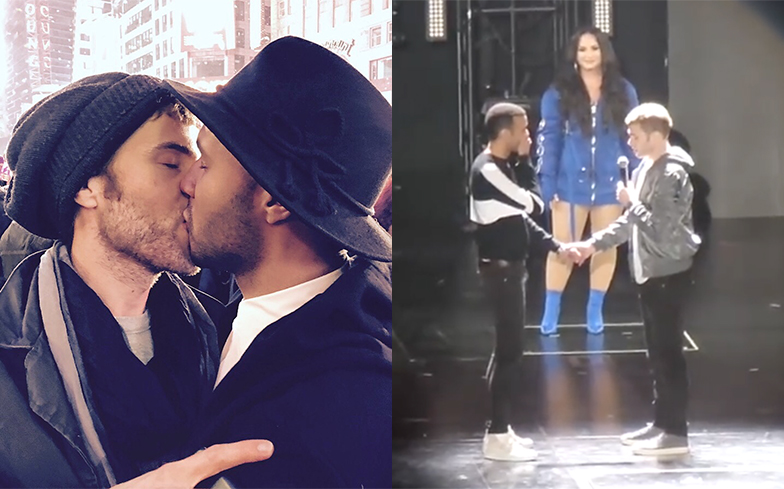 Demi Lovato has long been a supporter of the LGBTQ community, and she continued to welcome gay fans into her heart during the Los Angeles stop of her Tell Me You Love Me Tour as she helped a friend propose to his boyfriend.

The elaborate proposal began as Demi asked her dancers to select a member of the audience to come on stage with her, and they chose Rayvon Owen, a singer who previously appeared as a finalist on American Idol.

Unbeknownst to Rayvon, the decision was planned ahead of time, as his boyfriend, LGBTQ activist and filmmaker Shane Bitney Crone, later emerged out of a trap door on the stage to propose to him – and he said yes!

i'm still in tears. last night was hands down the happiest night of my life. i am beyond excited and honored to spend the rest of my life with you, @ShaneBitney. thank you @ddlovato for giving us this extremely special moment. #tellmeyoulovemetour pic.twitter.com/P3Kow9jdgZ

“What some of you don’t know is that these are two of my really close friends,” said an emotional Demi. “I’ve gotten to watch Shane go through so much and come out on the other side as such a strong person who’s found the love of his life.”

The singer then performed Yes from her 2015 album Confident, as a montage of photos of the newly-engaged couple played out on screens around the venue.

“I have to give a huge thank you to Demi for being a supportive friend and for helping make last night possible. It was one of the greatest moments of my life!” Shane wrote on Facebook following the concert.

“I also want to thank you for all that you have done and continue to do for young people, and particularly the LGBT community. Your heart, your voice, and your activism make everyone feel accepted, less alone, more empowered and more hopeful.”

Watch a video of the proposal below.

Following years of speculation – largely due to her bi-curious anthem Cool For The Summer – Demi finally addressed her sexuality in her official documentary Simply Complicated, which was released in October last year.

Speaking of her time on celebrity dating app Raya, she said: “I am on the dating app with both guys and girls. I am open to human connection. Whether that’s through a male or a female, it doesn’t matter to me.”

Prior to this, Demi passed on an opportunity to discuss her sexuality during an interview with Pride Source.

The singer also defended criticism from lesbian pop culture website AfterEllen, who claimed that her hit single Cool For The Summer suggested that same-sex intimacy should be secret.

“My intention with the song was just fun and bi-curiosity,” Demi said. “I think people look at song lyrics – they look too into it. I wish I could tell that website to ‘chill the fuck out’ and ‘take a break,’ because it’s just a song.

“I think we live in a world today where no matter what you do, you’re doing something wrong, whether it’s cultural appropriation or it’s being insensitive to certain groups of people.

“We just live in that age where everything we do is wrong and, unfortunately, everyone’s looking for a reason to have their voices heard, and sometimes it’s not always in the most positive way.”