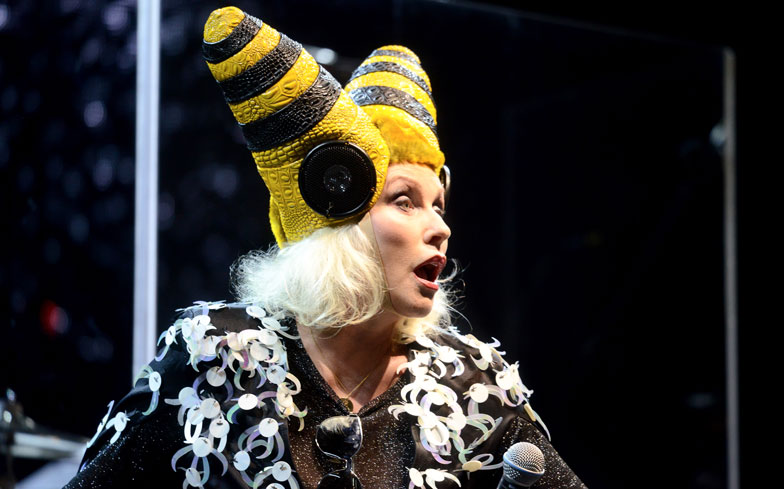 Debbie Harry has never been one for understatement, but tonight’s outfit choice is really quite something.

All eyes are on her as she appears on-stage in a bright yellow-and-black bee hat, resplendent with a cape bearing a slogan we couldn’t possibly repeat here. We learn it’s to raise awareness of the declining bee population – they are touring to promote new album Pollinator, which follows a similar ethical message.

Even in such unsubtle garb, Debbie still manages to embody an effortless New York cool vibe as she powers through Blondie’s back-catalogue of hits – and what hits they are. Opening with an impressive one-two punch of One Way or Another followed by Hanging on the Telephone, the audience is reminded time and again of the sheer quality and quantity of their enduring songs.

It’s a mixed crowd tonight, testament to the length of Blondie’s career and the broad appeal of their singles. Fans of their 1970s heyday stand alongside those who discovered the band during their late-1990s revival – yes, Maria really is 18 years old.

There are plenty of millennials here, too – and not just to tick a Blondie concert off their retro-chic bucket lists, as demonstrated by the mass singalongs of mega hits such as Call Me, Atomic and Heart of Glass, where pretty much everyone knows every single word.

With so many songs to choose from, there are of course going to be omissions and some fans may be disappointed. High profile casualties include Sunday Girl and The Tide is High – we’re sure there are some present who would have gladly swapped a few more recent numbers for a couple more classics – but on the whole this is a crowd-pleasing set and we thought it was pretty well balanced.

For a band that’s been around more than 40 years this is a surprisingly energetic set and the quality rarely dips. There are a few wobbles on some of the high notes, and Debbie largely avoids singing the choruses of Maria, inviting “her girls” – she means us – to sing it for her instead. Of course we gladly oblige and it creates a great atmosphere, but it’s a shame we don’t get to hear her sing some of the most iconic lines – she sticks mostly to her lower register for the majority of the concert.

For the most part, though, this is a hugely impressive set, and Blondie exude more energy than many contemporary acts. As Debbie powers her way through Rapture’s rap, it’s hard to believe she’s 72 – she is, as she always has been, a delightful performer to watch. Very much still got it!

More information about Blondie can be found here.