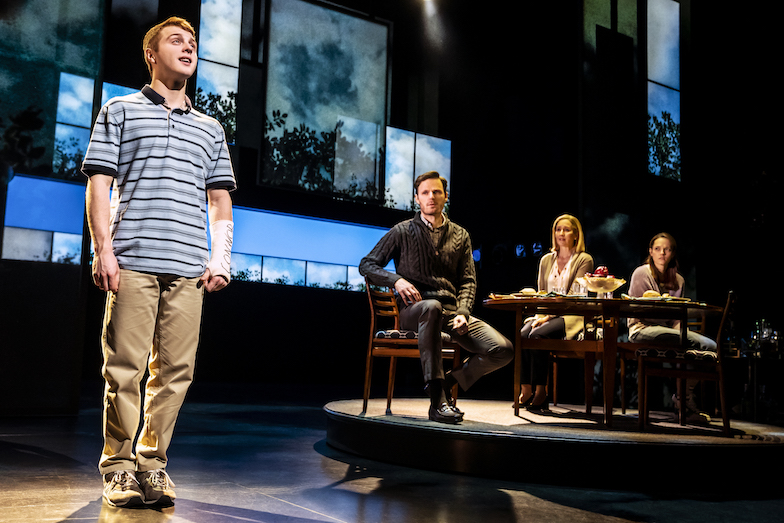 Direct from New York, the award-winning musical is sure to appeal to a whole new generation of theatregoers.

It’s fair to say that Dear Evan Hansen isn’t an easy story to watch, nor we imagine to tell. The show follows the perceived relationship between two school friends, Evan Hansen and Connor Murphy. Both living on the outside and struggling to find their way within social circles, their friendship becomes headline news on social media when Connor takes his own life. Wanting to be liked and with their previously unnoticed friendship coming to light, how far will Evan go and how many lies will be told before the truth finally comes out?

Sam Tutty takes on the challenging role of Evan Hansen, succeeding from start to finish. As Evan Hansen lies his way into wanting to be liked, and a friendship that isn’t all it seems, his dishonesty unravels all problems as he grasps to the hope that people might see that he and Connor him differently to how he really is. Vocally strong and fully understanding what’s required of playing an outcast, it’s the smaller mannerisms and stumbles that lead Sam to a roaring triumph. Tackling songs such as Waving Through A Window and Words Fail with seeming ease. Sam’s co-star Doug Colling as Connor of equal brilliance, however sadly underused throughout.

But Dear Evan Hansen’s success comes in many forms, not just with Sam. A small ensemble piece, there’s pockets of brilliance throughout – including music from the award-winning team behind The Greatest Showman, Benj Pasek and Justin Paul. Steven Levenson book does rely on the understanding that audience members have social media, or at least understand its impact. Yes people without it do exist and could feel excluded in all the nuanced references that send home why one lie can turn into such a digital problem.

However what Dear Evan Hansen perhaps might struggle with a traditional theatre audience is gained back in the hopeful new faces that visit. Centring such a large part of this clearly very modern show around social media, it suddenly becomes interesting to those pulled away from their iPad and Instagram feed. And perhaps, just perhaps, could even teach them about accountability on the web.

It’s unusual to have a show base so much of its story around the feeling of loss, or even confusion, but here it’s done well. Sam as Evan can only do so much, but it’s the reaction of those around – either through anger and confusion, or loss and tears – and makes it all work together. Nicole Raquel Dennis as the devoted friend Alana Beck wants so hard to believe, but struggling as time to keep the faith. Thankfully, her acting and vocal ability is anything but struggling, Nicole a breakout star. Lucy Anderson as Evan’s hopeful love interest Zoe Murphy of similar joy, and Rebecca McKinnis as Evan’s mother, Heidi Hansen, grasping the audience by their tears during the close of act two. A real moment, for sure.

Michael Greif’s production is no easy ride, but it’s sure to appeal to a whole new generation of younger audience members that deserve the chance to experience live theatre, an important story, and the power in listening to others.