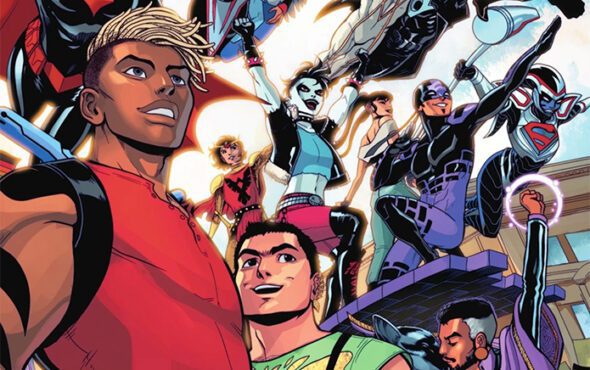 DC’s all-queer Justice League will be returning for a holiday special edition due to overwhelming fan demand.

The LGBTQ+ superhero team made its debut in the DC Pride #1 short story Love Life in celebration of Pride Month this year.

Named Justice League Queer (JLC), their first storyline focused on Aqualad who has his date with Syl ruined by Eclipso, who attacks a Pride parade.

Now, the group will return for an anthology titled ‘Tis the Season to be Freezin’ that will go on sale in December.

This is followed by Minister Blizzard barging in with an unnamed partner, declaring that he wants the world to enter a state of “everlasting winter”.

This sets the scene for the rest of the comic, which will see the JLQ battle against the villain and his plans.

The 80-page issue will feature iconic characters from the DC Universe, including Harley Quinn, Flash and Robin.

Although the future of JLQ beyond this issue is yet to be confirmed by DC, it will not mark the end of LGBTQ+ representation in comics.

Jon Kent, the Superman of Earth and son of Clark Kent and Lois Lane, is making history by shaking up the traditional narrative of the Superman franchise.

DC announced that the character would be bisexual and starting a same-sex relationship with a friend in future issues, which would include illustrations of them kissing.

“I’ve always said everyone needs heroes and everyone deserves to see themselves in their heroes and I’m very grateful DC and Warner Bros. share this idea,” said writer Tom Taylor in a press release.

“Superman’s symbol has always stood for hope, for truth and for justice. Today, that symbol represents something more. Today, more people can see themselves in the most powerful superhero in comics.”

In Superman: Son of Kal-El, Jon Kent falls for a reporter – just like his father in the main series.

Kent finds an endearing closeness with friend and reporter Jay Nakamura, with the pair becoming romantically involved in the new issue of the comic following a scene where Superman burns out from trying to save as many people as he can.

“I’m incredibly honoured to be working beside Tom on the Superman: Son of Kal-El series showing Jon Kent tackling his complex modern life, while also saving the world from its greatest threats, villains and menaces,” said artist John Timms at the time.