Daya reflects on her coming out: “Everyone’s journey is their own” 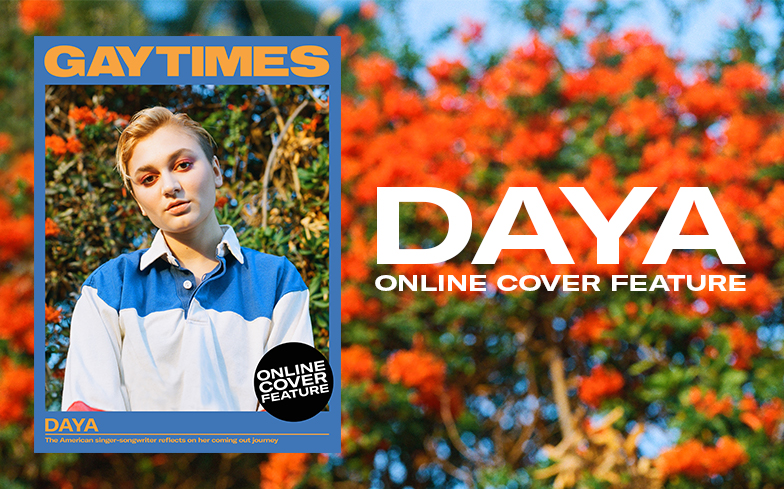 In a vintage Madonna sweatshirt at 2pm in Los Angeles, 20-year-old Grace Martine Tandon, better known as singer-songwriter Daya, invites me into her home.

I’ve met Grace a few times before, but this time she appears at the front of her Hollywood residence in sweatpants gripping an iced coffee. She laughs, “my usual attire is baseball hat and sweats,” then opens the door for me. There is a noticeable change in her since I’ve seen her last. Her hair is shorter, sweats are slightly baggier, and most importantly she carries herself with a new air of confidence that feels the most authentically Daya.

“I think my childhood had a lot to do with the person I am today,” she tells me while showing me her backyard, which overlooks Hollywood Hills. She continues: “I have four sisters and they are all very independent and driven. My mother is so strong and one of my biggest influences. We are all hardworking like our mother. She really set an example for us as women.”

She relates this to her own work ethic, then tells me that she’s always been attracted to art that “made her really feel something.” She warns me: “I can spot bullshit pretty quickly,” then adds, “I always sought out authenticity and realness in art,” before naming Amy Winehouse and Alanis Morissette as some of her biggest influences, complimenting their outspoken and assertive points of views.

Well-known for her hits New, Safe, Sit Still, Look Pretty and Hide Away – as well as her huge Chainsmokers collaboration Don’t Let Me Down – the star has had a meteoric soar into the spotlight. She admits that her new music forthcoming is most reflective of her now evolved sense of self.

“I’ve had time off this year, and experienced a lot of personal growth. I’m living in Los Angeles which has changed the pace of my work. I’m even in a relationship. I’m still growing but [taking time off] has only made me stronger and more myself.” This is more than self-evident as I watch her move through her house and speak about her recent experiences in Los Angeles. She references vines, mentions that she’s gluten-free, suggests going out in West Hollywood, then apologises to me for her messy fridge. She tells me that she loves the nightlife in Los Angeles because “you can meet 10 new interesting people in a night.”

When asked about her relationship, she jokes with me, “She’s terrrrrrrrible,” then very quickly lights up at just the thought of her girlfriend of now nine months, Clyde. “She’s so talented and we really get each other on a level I’ve never ever felt with anyone else,” Daya explains. “I had actually been posting pictures of us on Instagram for a while, but I wanted to start a more a clear conversation so I posted it on social media on national coming out day.” She smiles, then explains that both of them have actually come out publically since falling in love with each other about six months ago.

Come out when it feels right. Surround yourself with your support system.

She recounts her family’s response: “I’m usually so independent and single, I think they were more shocked that I was dating someone at all, than surprised that it was a girl.” She continues on the topic of coming out, “I think the number of times you have to do it is something not a lot of people know about coming out.” She adds that it’s been a process. “I came out personally to my grandma, and then my entire immediate family all in person.” She pauses. “Everyone’s journey is their own. Come out when it feels right. Surround yourself with your support system.”

Daya wears a vintage jacket and jeans by J Brand

This love that she has found is not only apparent in her relationship, but evident in the way she walks through her own home. Especially since coming out, she explains, “I’m willing to take more risks. I love myself more, and I’m definitely more accepting of myself now. I feel like it’s been a crazy journey.” This newfound self-love is also a driving force behind her new music. “My new album is really all love songs. I tried to write moody songs, but now I’m in such a good mood.” In terms of sound, she describes her new album “as [going] somewhere [she] hadn’t yet been before.” She explains, “It explores different parts of my voice and sounds, and [it’s] definitely the most real body of work I’ve put out to date and the most definitive of me.”

As she finishes her ice coffee and puts it down, she looks up at me and exclaims, “I don’t want to put too many more words to it. Listen and judge it all for yourself.”