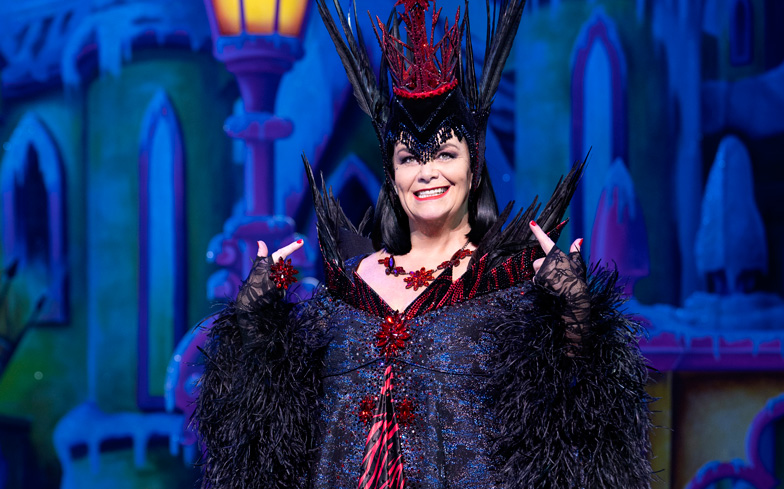 It’s that time of year again (Oh, yes it is!) and the British tradition of pantomime returns to the world-famous London Palladium in dazzling (and filthy) form.

The Oliver Award-winning creators behind Snow White return from their illustrious gong with production credits that will leave you regularly thrilled. From projections and grand set designs through to costumes that look like they’ve just stepped off the Drag Race runway, there’s gag-worthy moments by the second here. And that’s before we’ve even got to the famous faces on display, too!

It comes as no surprise that any show with comedy legends Dawn French and Julian Clary at the helm is sure to have an audience in hysterics, and thankfully they don’t disappoint here. In fact, they do shock – regularly – such is the filth and Christmas smut on display here.

Julian Clary (The Man in the Mirror) and Dawn French (The Wicked Queen) clash regularly in a playful game of cat and sass – we will leave you to decide which one is which. Well, that is when Julian isn’t hurling a crude innuendo over the heads of the watching children, and Dawn isn’t dressed as the (spoiler incoming!) The Vicar of Dibley. It might be short but by-heck it was worth the wait.

Charlie Stemp (The Prince) makes a dashing leading man alongside his princess Danielle Hope as Snow White. Strictly Come Dancing legends Vincent (The King) and Flavia (The Queen) of equal brilliance. Elsewhere, Gary Wilmot (Mrs Crumble) thunders through the names of Palladium icons to rapturous applause, and Paul Zerdin (Muddles) and his sidekick will warm even the coldest of hearts this. And of course, Nigel Havers as The Understudy is… well, Nigel Havers.

What more could you possibly want?! This festive and fabulous Christmas adventure should be on the NHS such is the joy it brings to the heart. It’s perhaps why we look forward to it so much every year. And while the story of Snow White isn’t as enthralling and enchanting as the previous Palladium treats of Cinderella and Dick Whittington, there’s more than enough to keep you willing for that happy ever after.