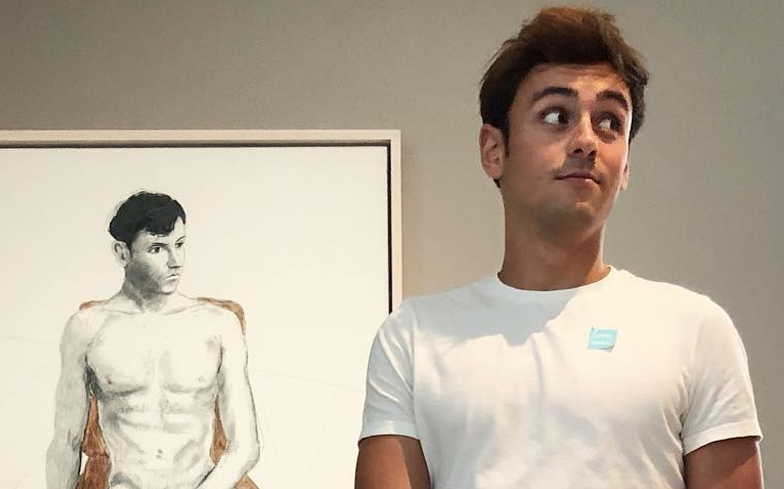 For more than 50 years, David Hockney has used the human form in some of his most famous works – usually hand-picking his subjects from his pool of close friends, family members, lovers and peers.

But for his latest piece, he’s used one of the most recognisable faces in Great Britain for a provocative nude portrait, created with charcoal and crayon on canvas.

Tom Daley visited the Los Angeles County Museum of Art over the weekend to see his nude portrait on display, after sitting for Hockney last August.

“When you have a Hockney nude in LACMA,” Daley posted on Instagram, standing in front of the artwork.

“We went sightseeing as a family, and my mum saw me naked…we made a funny VLOG about it.”

Related: Tom Daley says he felt “too unsafe” to compete in Russia after coming out

He was joined by his husband Dustin Lance Black, mother and his newborn son for the day out at the gallery.

“Well that was definitely weird. My mum and my son seeing me naked. I know my mum’s seen me naked, but I was very young when that last happened,” Tom said in his VLOG.

“I sat for Hockney last year, and he drew me… naked. It’s pretty cool that it’s hanging in LACMA, I’m not going to lie.”

Tom Daley and Dustin Lance Black have resided in Los Angeles for most of the summer after welcoming their newborn son Robbie Ray back in June.

The iconic artist – who has lived openly gay for his whole career – has been featured in over 400 solo exhibitions and over 500 group exhibitions.

Watch Tom Daley’s latest VLOG where he visits his nude portrait at LACMA, below: