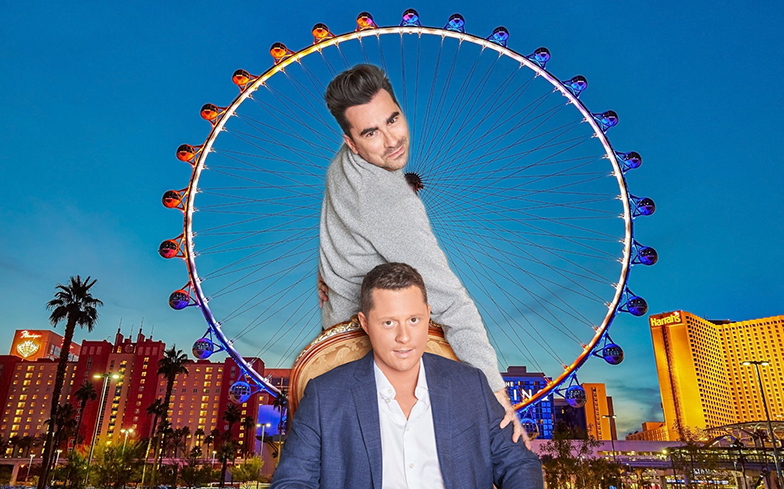 Beforehand, David (in Bridezilla mode) sends a reluctant Patrick off to get a spray tan to compliment his “practically Sicilian complexion,” which results in a Ross Gellar-esque mishap when he arrives to the photoshoot a few shades darker.

It’s definitely up there with critically-acclaimed dance-pop anthem A Little Bit Alexis and Moira Rose’s upcoming role in the highly-anticipated The Crows Have Eyes sequel, The Crowening, as one of the show’s best moments.

After one fan on Twitter embraced their inner Ray Butani by editing the couple in front of a ferris wheel, Dan Levy (David) dared his followers to “Ray-ify” David and Patrick and put their photoshop skills to the test.

See some of the best memes of David and Patrick’s engagement photos below.

Although Schitt’s Creek is currently at its peak, both critically and commercially, Dan announced earlier this year that he and his father (and his co-star) Eugene Levy were ending the show with its sixth season.

“It’s not lost on us what a rare privilege it is in this industry to get to decide when your show should take its final bow. We could never have dreamed that our fans would grow to love and care about these characters in the ways that you have.”

The final season of Schitt’s Creek airs every Tuesday on Pop TV.