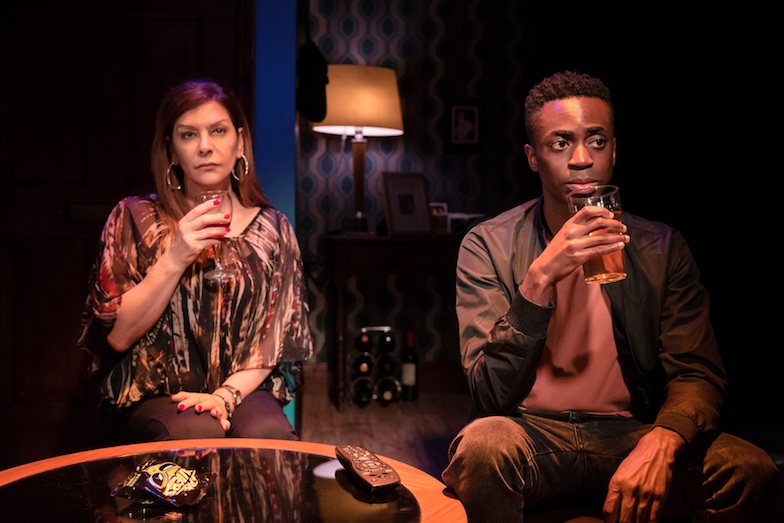 Star Trek’s Marina Sirtis stars in this hilarious love-letter to classic science fiction, and the queer people who adore it.

Dark Sublime is a fictional TV series with a cult following, and Sirtis is here playing Marianne – a former star of that invented 70’s show. Best remembered in the real world for her role as Deanna Troi on Star Trek: The Next Generation, this is a part that fits Sirtis like a well-tailored space-glove. And her lesbian best friend Kate is played by Jaqueline King who is perhaps most well-known for her appearances as Catherine Tate’s Mum in Doctor Who, so this is already quite a metatextual beast – and that’s before we even get to the on stage flashback recreations of a lost episode of the imaginary TV show.

Sirtis is a revelation; the jaded, cynical heavy drinker that she plays here is a far cry from the poised empath that Star Trek viewers will remember, and her chemistry with King makes for a palpably plausible friendship – one that has painful secrets to yield over the course of the play. A pair of raw and real performances that sing with painful truth.

A main focus here is the yawning chasm between how Marianne is viewed by her friends and the unquestioning adoration of her fans. The latter is superbly personified by Kwaku Mills as geeky queer fanboy Oli. Mills has an infectious energy that endears us to him immediately – which is just as well, as he’s representing a large section of the audience. His scenes as a convention organiser are chillingly familiar to anyone who’s ever braved such a gathering. But beneath all the sci-fi trappings is a story with a real beating heart, and emotions that run so deep that they actually seem to require the melodrama of space opera to be satisfactorily expressed.

This is a remarkable piece in that all of the major characters are gay or bi, but without that being a driving force of the plot or narrative. It does feel quite appropriate, however, given the subject matter. While many gay boys were enthralled by the pop divas of whichever age they grew up in, a notable subset of us were far more interested in the the outer-space adventures of character actresses in outlandish outfits. This piece acknowledges and celebrates that fact in an honest and heartwarming way. With hundreds of affectionate nods and references, and even our tribal leader Mark Gatiss as the voice of the slightly camp computer, this is gay geek heaven.