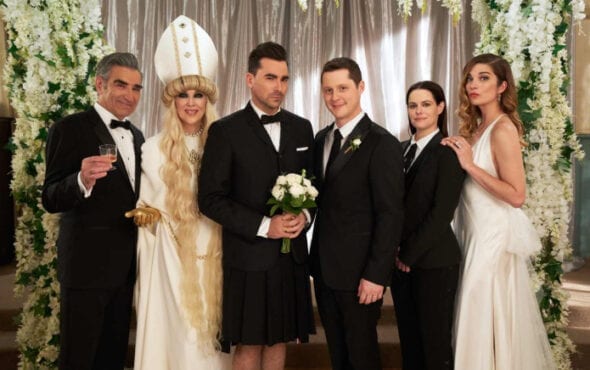 Dan Levy has opened up about the possibility of a Schitt’s Creek film.

The critically-acclaimed sitcom concluded the stories of the beloved Rose clan last year with a pitch perfect series finale, but of course, as is the case with most shows, there’s already rumours about a potential reunion.

Not just from the fans, star Annie Murphy – who played spoiled socialite and A Little Bit Alexis songstress Alexis Rose – told US Weekly that she’s been sending Levy “$5 a day in the mail” to bribe him into writing a feature-length film.

“So far, I have not heard back about a movie officially. But, oh, my God, I would be just over the moon if that ever came to pass because I miss everyone so much every day,” said Murphy.

The Emmy Award-winning actress, who currently stars in AMC’s dark comedy series Kevin Can F**k Himself, added: “Just to see Moira again, I would pay a lot of money to do that.”

In a recent interview with Town & Country, Levy – who created the series and starred as pansexual icon David Rose – was asked about Murphy’s comments, to which he jokingly responded: “That pesky woman! No, not right now. I hope eventually.

“Listen, I love everybody so much. I love Annie, even for hinting at that. We had such a great time making the show and I think if the idea is right, I would love to explore what a movie could look like. But, I don’t have that idea yet.”

Levy said he’s “still searching” for an idea for a Schitt’s Creek film and his “fingers are crossed”, but added that audiences need time to mourn the series before it makes a comeback.

“So, I’m taking some time and we’ll see what happens in the next couple of years, but my fingers are tightly crossed,” he said.

During his joint interview with Rashida Jones for the publication, Levy also revealed that his first instinct was to “do something immediately after” Schitt’s Creek, but came to realise that he needs to take time to “develop things” and think about what he wants to say next.

“So, for me, I’ve been developing a few things quietly. I don’t love to talk about things before they’re ready, because there’s so much uncertainty in this industry that I would hate to jinx anything,” added Levy. “But, I have been taking a lot of time to figure out what’s next and exploring everything from animation to drama and everything in between.

“So, I’m excited to see what comes out of that process, but, until that happens, [I’ve been] been making the conscious choice to just focus on what [I] want to say and how [I] want to feel, and if you’re in a good headspace, I think you can do good work. So, I’m also spending time on me.”

Last year, Levy made history when the sixth and final season of Schitt’s Creek swept all seven major categories at the Primetime Emmy Awards – the first time for a comedy or drama.

The series also set a record for most Emmy wins by a comedy series in a single season, and Levy became the first person to win a Primetime Emmy Award in all four major categories in a single year.