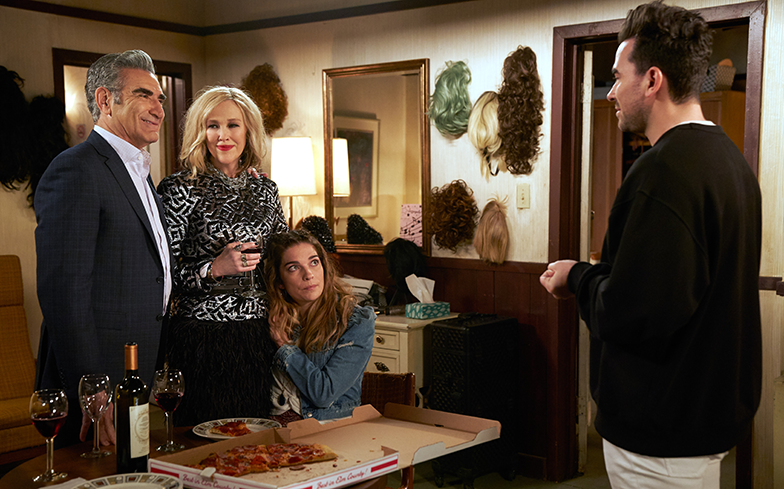 Dan Levy has revealed if Schitt’s Creek will live on past its series finale next week.

In a new interview with Variety, the showrunner – who also plays pansexual fashion icon David Rose – explained his decision to end the critically-acclaimed Canadian comedy and whether he’d return to the series in the future.

He said: “I wish that this show could have gone on 100 seasons. But it’s quality over quantity. If an idea crosses my path that I feel is deserving of our cast’s time, then let’s do it. I don’t know what it could possibly be at this point.”

Dan went on to say that he “would love to revisit these characters, and I would love to get to play with this cast again. I feel very proud of the work that we’ve done, and I wouldn’t want to do anything that compromises that.”

“We just showed how much better life can be if you put those beliefs aside and really let people grow and thrive. And so much love comes from it — so much joy and happiness and strength.”

Dan’s father Eugene Levy, who also plays his on-screen father Johnny Rose, credited the the wine scene from the first season – in which David explains his fluid sexuality to Stevie (Emily Hampshire) – as a reason for the show’s passionate queer following.

“It’s had an amazing, amazing impact on people’s lives,” said Eugene. “The letters, the emails that we get from kids — I think the ‘Wine, Not the Label’ episode was a big thing in helping kids coming out to their parents.”

Following the series finale on 7 April, Pop TV will air an hour-long special which will take fans behind the scenes with never-seen footage of wardrobe fittings, audition tapes and obviously, that emotional finale table read with the cast.

Watch the trailer for the final ever episode of Schitt’s Creek below.