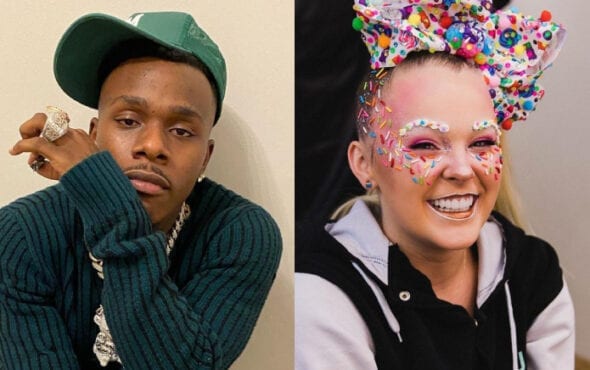 DaBaby has clarified his controversial lyric about JoJo Siwa.

Last week, the chart-topping rapper released a brand new track called Beatbox Freestyle in which he seemingly hit out at the 17-year-old YouTuber.

In the video, DaBaby holds up a photo of Siwa on his phone as he raps, “You a bitch, Jojo Siwa, bitch,” which left fans extremely confused, to say the least.

Following widespread backlash towards the lyric, DaBaby took to social media to explain that he wasn’t hitting out at Siwa, and the line was a play on words. Apparently, “JoJo” references his real name Jonathan, while he used “Siwa” as a twist on “See why”.

Later, DaBaby tweeted Siwa and explained that he meant no disrespect in the lyric, especially because his daughter is such a staunch supporter of her work.

“My 3 year old princess is your number 1 fan. I bought her every product you have out. She think she you,” he said. “Don’t let em trick you into thinking I’d ever have a problem with you. My word play just went over their heads.”

He then reiterated: “All love on my end shawty, Keep shinning!”

@itsjojosiwa my 3 year old princess is your number 1 fan. I bought her every product you have out. She think she you.😂

Don’t let em trick you into thinking id ever have a problem with you. My word play just went over their heads.

All love on my end shawty, Keep shinning! 💝

Last month, Siwa came out as a member of the LGBTQ+ community after showcasing a t-shirt that her cousin bought her, which read: “Best. Gay. Cousin. Ever.”

One fan of JoJo’s succinctly explained why her coming out is so important, writing: “Remember that there are LGBT kids that watch her videos that may have felt so alone with their identity and seeing the person they look up to coming out makes them feel safer and more comfortable with themselves.”

“Right now, I’m super-duper happy and I want to share everything with the world, but I also want to keep things in my life private until they are ready to be public. Right now what matters is that you guys know that no matter who you love, that it’s OK.”