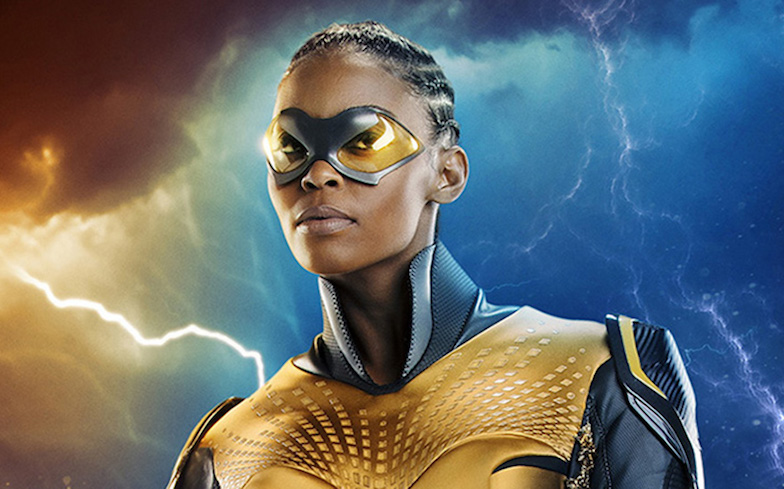 Nafessa Williams stars as Anissa “Thunder” Pierce, a superhero who is able to manipulate her body’s density at will.

The CW’s highly-anticipated adaptation of comic-book Black Lightning – which premieres tonight – will give us the first black superhero family on television, as well as one of the only lesbian superheroes of colour.

Black Lightning follows the title character – Jefferson Pierce (played by Cress Williams) – a retired superhero with the ability to harness electricity, who becomes the headmaster at a high school.

He returns to fighting crime when a local gang – The One Hundred – threatens citizens in the community.

American actress Nafessa Williams plays Pierce’s daughter Anissa, a lesbian medical student and part-time teacher who is able to manipulate her body’s density at will.

Williams told Comic Book Resources: “Anissa’s character… is pretty unique. She’s a lesbian, so little girls are going to be able to look up and be like, ‘Okay, I’m like her and hopefully my parents will accept me the way her parents accepted her.”

In the DC Comics, Anissa’s character develops a romance with half-Amazonian, Asian-American character Grace Choi – played by Chantal Thuy – and you’ll be pleased to know their relationship will also be transferred on-screen.

“Grace and Anissa have a connection that she’s never had with anyone else before… They understand each other,” she said.

Williams also likened Anissa’s discovery of her powers to the realisation of her sexuality: “She’s becoming a young woman, and she’s reaching her independence and discovering these things and it’s exciting.

“But sometimes we have growing pains, where we’re excited about what’s new… but you’re also intimidated and a little afraid because you’ve never been here before. So she’s learning some lessons and she’s figuring some things out, for sure.”

Anissa’s discovery of her abilities will also result in a “coming out” moment to her parents: “It’s a beautiful moment, for sure. She’s not sure who to tell, not even really sure of what’s happen, or how to explain it without sounding crazy. There is a moment where you will see her have that intimate talk with her parents. The ‘reveal,’ if you will.”

Watch the trailer for Black Lightning below.

Black Lightning premieres 16 January (TONIGHT) at 9/8c on The CW.