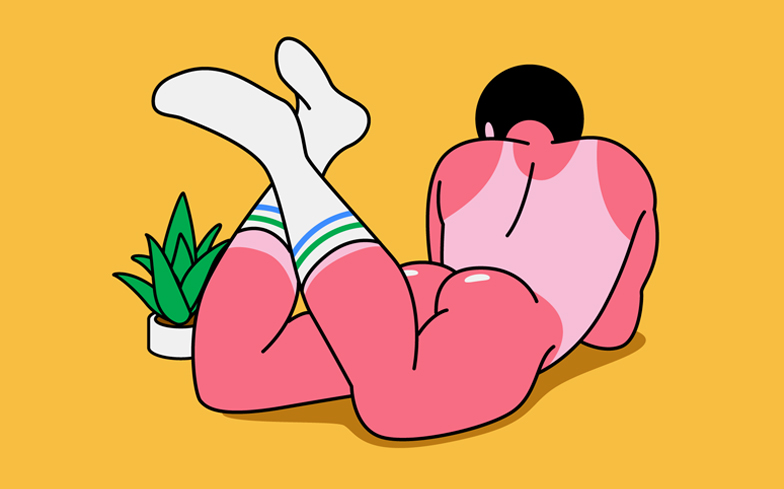 Suggestive sausages, cartoon butts and a selection of saucy silliness — this is one follow you won’t regret.

With over 20,000 followers (and counting), illusive artist Cute Brute has found Insta fame from his array of cartoon-like creations, most of which focus on gay characters and tongue-in-cheek male nudity. In an online landscape filled with belfies, face-tuned mugshots and tight torsos, it’s a small comedic escape from the norm — and of course, we’re very much into it.

And we’re not the only ones… Earlier this year, Cute Brute teamed up with Instagram to create the rainbow sunglasses sticker (which you’ve seen on everyone’s Insta story at least once — right?), he collaborated with Refinery29 for Pride and designed posters for queer musician, Big Freedia.

His next big venture will see him making Cute Brute Loot — a range of merch featuring his tantalising artworks. Offering a new edge to the Insta experience, we sat down with Cute Brute to explore his creative process ahead of what’s certain to be a huge 2018.

Why do you choose to work under a pseudonym?
Convenience, mostly. I do a pretty wide variety of illustration and design work in general and it’s just easier to keep everything Cute Brute as its own separate entity. It also tends to keep the focus on the art itself. Of course now it all seems a bit enigmatic, but that’s part of the fun too, I guess. I’m not Banksy — just a guy who compartmentalises too much [laughs].

Your work often explores eroticism and masculinity.What is it that attracts you to explore these themes?
I think what really attracts me to these themes — aside from just being fun to draw — is the juxtaposition in this particular art style. It’s about achieving that right blend of cute with brute, taking something that’s classically macho or a bit sexy and making it light or fluffy or ridiculous. I love celebrating the male form, but as a rule I tend to not go too overt with eroticism. There’s definitely a line and at the end of the day it’s all meant to be playful and not take itself too seriously. If there’s one thing that hopefully transcends the work, it’s humour.

You’re inspired by the 70s, why are you particularly influenced by this era?
I wasn’t actually around for the 70s, but a lot of the illustration from that time has always resonated with me. Flat, somewhat simplified forms. Bold colours, often in a limited palette. Compositions that are both very graphic yet whimsical. There’s a nice challenge in trying to communicate an idea through an aesthetic that has such limitations.

How do people respond to your illustrations?
It’s always funny to see how people interpret or react to my work. I tend to keep things somewhat simple or nebulous, to allow people to take from it what they will. Most appreciate the levity — it makes them laugh or they’re awed by the cuteness. Others make it a point to inform me how titillated they are. Of course, once in a blue moon I might see a comment from someone who misses the mark completely or is even off-put by an image, but it’s still so amusing. The response overall has been fantastic, though. I receive a lot of photos of Cute Brute tattoos from around the world, which is super flattering.

What is your favourite piece you’ve ever done, and why?
God, this is a tough one. If I HAD to choose, my favourite piece would probably have to be either Lady and the Rump (for the reaction it gets) or the piece entitled Steamworks which is a somewhat elaborate deconstruction of a sauna (which was just fun to illustrate). People are quick to interpret it as a gay bathhouse, of course, but it’s actually inspired from Asian and Scandinavian bathing culture in general — of which I’m a big fan. Every October I do Spook Brute, which is a month-long take on the theme of Halloween and it’s usually an opportunity to just get super weird and macabre. I’ve noticed that people are really into this series so it gets me excited to work on it, and inevitably a lot of new favourites come out of it.

Your work seems to attract attention from a wider gay audience. Is this intentional? Why do you think this is?
Because I draw a lot of men’s butts! Yeah, it’s definitely intentional. I’m gay. Representing elements of queer culture is important in my work. That voice, as prevalent as it is in 2017, is still important. But to that point, I also try not to make it too exclusive. I absolutely love my gay fans. What I find encouraging, however, is the response from non-gay followers. I get a lot of positive feedback from women and straight men — older, younger, from all over — and given the subject matter, I think it’s pretty awesome. This was an especially gay summer for Cute Brute. I worked with Refinery29 for Pride, did posters for Big Freedia, designs for Traición in Mexico City. I did the rainbow sunglasses sticker for Instagram and it still makes me so proud to see it used in so many gay gay gay stories!

You use Instagram as the main source to output your work — what are the benefits of using Instagram to share your artistic creations?
The best thing about Instagram is the community aspect — you really feel engaged with your audience in real time. I’ve met so many wonderful new friends through this platform and had the opportunity to collaborate with other talented creatives. The exposure is terrific and the energy put into promoting work is minimal. I also do a lot of print sales through Instagram and that process has been quite convenient. When I initially set up the Cute Brute account, it was just a personal exercise for me to create and post work on a regular basis. There was no real intention beyond that. But the experience has been incredible and for that I’m very grateful.

Moving forwards, can you see your artwork translating to other mediums; t-shirts, pins, patches, exhibits etc?
Absolutely. As a matter of fact, a lot of Cute Brute Loot is currently in development for 2018. I’m hesitant to divulge too much at this time, but… stay tuned!

Tell us about what your main goals are moving forwards.
You know, it’s still pretty open-ended. Right now I’m working my way through a massive project list and gearing up for a few exhibitions. It’s a bit day by day, but in the coming months I am looking to expand the Cute Brute presence beyond Instagram and develop more content behind it. For what started out as a side project, Cute Brute has turned into a full time gig and I’m juggling as fast as I can. It can be exhausting, but I love every second of it.