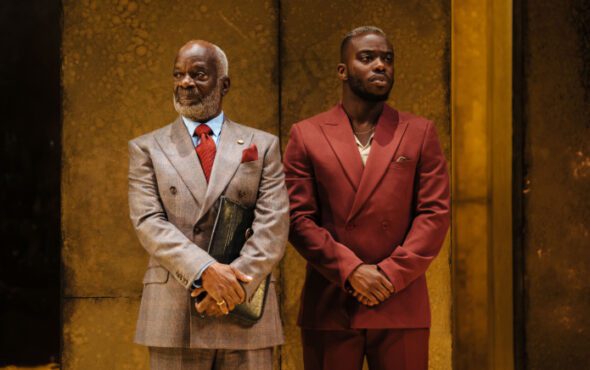 It’s not surprising that this particular production of Hamlet has arrived with some fanfare and substantial interest from the theatre industry – it marks the first time Shakespeare’s infamous Danish prince has been played by a black woman in a major UK production. The Good Wife’s Cush Jumbo takes on the titular role and delivers an astonishing performance – hers is an androgynous prince, head shaved and dressed in a loose fitting suit, commanding the stage from the moment she appears. There’s plenty of wit and enough grit when required, and she brings a fresh and youthful energy to the role.

While Cush Jumbo absolutely shines in the lead role, this is unfortunately an otherwise inconsistent production of Hamlet. There are flashes of inspiration peppered throughout the show – spontaneous rap sequences, impressive visual effects – which really drew our attention. They sit uneasily with more traditional scenes and conventional acting performances. It’s a mishmash which doesn’t really work – not sustained across a show lasting more than three hours. We felt it needed to be bolder in choosing a direction and sticking to it – instead we have a show that flits uncomfortably between the modern and traditional, with varying results.

Anna Fleischle’s sparse set is impressive – far smarter than it initially seems, over the course of the evening it transforms the stage into a space of smoke and mirrors, evocative of the key theme of surveillance; the revolving pillars are reminiscent of a castle whose walls are full of history. Lighting and sound combine at times to recreate the atmosphere of a thriller – it’s impressive stuff to witness unfold live on stage.

On balance, this production of Hamlet has its moments and provides a reasonably entertaining night at the theatre – we just wanted more. It’s been four long years since a major production of Hamlet last graced London’s stage – the impressive Almeida production, starring Andrew Scott in the lead role – and while the Young Vic’s interpretation doesn’t reach the same heights, it’s still enjoyable. Cush Jumbo’s towering performance is probably reason enough to pick up a ticket, but given the quality of lots of individual components here, it’s a shame the play overall doesn’t add up to more than the sum of its parts.