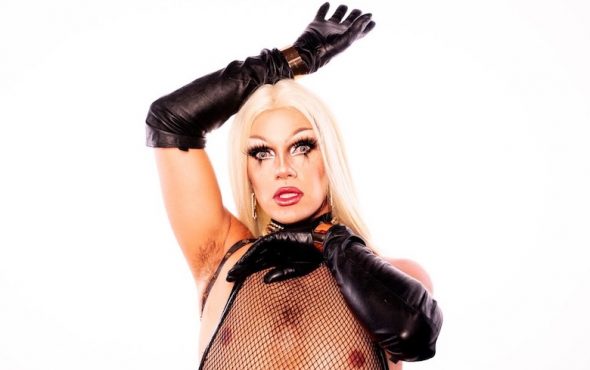 “It’s the best parts of the film Glitter, plus questionable live vocals and heaps and heaps of delusion.”

Hosted by Crystal and award-winning “monstrosity” Baby Lame, the event sees the troupe return to their natural drag habitat at the Bethnal Green Working Men’s Club, and will feature a riotous mix of drag, circus, burlesque, cabaret and comedy.

You can also expect to gag over performances from several legendary and diverse entertainers in the London drag scene such as Freida Slaves, Chiyo, Fancy Chance, Rubyyy Jones, Lady Noelia and Margo Marshall. A portion of the proceeds will be donated to Colours Youth Network, a QTIBPOC-led charity that supports young queer people of colour.

“It’s a big hodge-podge of all kinds of different stage performance, with a real focus on creating joyful, queer moments,” Crystal tells us ahead of the event. “There’s kings, there’s queens, there’s circus, there’s freakshow – all sorts. I’m really proud of it.”

Here, we chat with Crystal about the much-anticipated return of Mariah & Friendz, life after RuPaul’s Drag Race UK and the obstacles drag performers, and queer people in general, face with censorship in our current digital age.

Can you believe it’s been a year since our Drag Race UK shoot? How has life been since?
Mental. Yeah, it’s been great. So much has happened that I cannot believe it’s been a year, because I feel like I’ve packed five years into the past year. I got married after we filmed it, so that’s a huge thing! Then you’re sitting on it all, keeping quiet and then it all happens and it’s crazy. That was a really fun period, when it was airing. Obviously now, there’s the coronavirus and everything has just changed in my life so many times in the last year that I don’t really know where I’m at. And you’re going to be on Canada’s Drag Race, which is exciting! What can you tell me about that?
Yeah! That’s so cool. It’s just a little cameo but it was really really fun. I’m so glad that I got to do that. I’m actually filming a promo for BBC tomorrow as well. It’s nice because I’m going to be the official Canadian correspondent! It should be great, and it’s what we need right now. There’s nothing else to do, so we might as well have some good TV.

So in the future, are you going to be on Drag Race All Stars, Drag Race UK All Stars or Canada’s Drag Race All Stars? Which is it Crystal?
Ooh! I mean, I’ll take it wherever. Wherever I can wriggle in! Wherever they’ll take me. If I can find a crack, I’ll squirm through it. But yeah, who knows? Ideally, I think they should do a mash-up season, but… I’m sure there’s a plan for us all. I’ll be the last to know!

This weekend, you’re premiering a glossy, digital version of your monthly night show Mariah & Friendz for Pride Month – what can you tell me about that?
This club night is how I started doing drag and we’ve been going for over six years. I like to say that it’s very loosely inspired by Mariah Carey, so it’s the best parts of the film Glitter, plus a lot of questionable live vocals and heaps and heaps of delusion. It’s a wonderful mix of drag, circus, burlesque, cabaret and comedy. It’s a big hodge-podge of all kinds of different stage performance, with a real focus on creating joyful, queer moments. It’s anarchic, messy, loud and in your face. It’s unashamedly political. You don’t know what to see or expect, and what I’m really proud of is that we’ve got a wonderfully mixed crowd. It’s really mixed across sexualities and race and that creates a wonderful atmosphere. We’ve been there monthly ever since 2014 and this is the first period where we haven’t been there. We’re all really missing it and all of the cast are sick of trying to do at-home digital stuff. No one is really getting the vibes, you know? Speaking for myself, it’s been great doing the digital stuff and I’m so thankful that I’ve been able to make some money, but it’s nothing like being on a stage in front of an audience. We wanted to recreate some of that feeling and that magic. Thankfully, restrictions were eased enough that we were able to take a crew into the space and film a version of it. Baby Lame photographed by Elizabeth May

How long did it take for you all to put this show together?
There’s nine performers and it’s a one-hour show, so it took us a day to film it. We were there for about 18 hours. Yeah, you can imagine being in drag for that long! We filmed all over the club, so it’s got a music video feel, I guess. We haven’t just used the stage, we’ve filmed in the toilets, the smoking area, the dressing room… You get an inside look into what the club is like and we’ve really played up to the fact that there was no audience there. We’ve got an audience of one watching the whole thing, and it’s a bit tongue-in-cheek. The whole cast, we’ve had so many experiences with doing digital drag and feeling a bit under-enthused, so we wanted to make sure we did something that felt different. Part of that is filming in a space, but part of that was doing a pre-record. It’s been edited beautifully and it’s going to have a glossy, music video feel, and we have this amazing cast. There’s lots of drag names you’ve probably heard of: Frieda Slaves, Margo Marshall, Chiyo, Ruby Jones. We also have aerialists, a fire-breather, a hilarious drag king Prince-impersonator. There’s kings, there’s queens, there’s circus, there’s freakshow – all sorts. I’m really proud of it.

And what kind of obstacles did you face along the way?
One of the real challenges we had was figuring out how to get it out there. I just don’t think the technology is still there. We wanted to do a live-stream viewing of it, but the technology means that we might have sync issues and the quality of the film would be not as good. We started looking at ways of hosting it, and between copyright from music issues, to other platforms censoring you for nudity or the hint of a breast, we’ve had a really hard time. What we’re gonna do is host a live show pre-party on Twitch and then at 8pm, we’re going to send a link to everyone to watch it on Vimeo. This is a Pride show, so we don’t want to start censoring people’s bodies or censoring the language we use or content. We want to have the same queer feeling the nightclub itself has. I think censorship is a real issue with this time we’re living in. Queer artists, we’re used to being in live spaces and saying what we want and doing what we want. Suddenly, we have to go through a corporation to express ourselves? Whether that’s Instagram or Facebook or Twitch, or whatever it is, then you have all these sudden rules and policing. It’s quite uncomfortable and it’s hard to figure out how to stay authentic. We’ve got someone pissing, so I understand that what we doing is pushing an envelope! But it’s like, how can queer people express themselves in a world where everything is digital? Freedia Slaves photographed by Only By Nght

You also have a lot of young fans from Drag Race UK – is it difficult finding that balance, where you have to make your drag accessible for everyone whilst staying true to your artistry?
I struggled with that at the beginning, when I noticed there were all these teen girls following me. But I’ve come full circle on it and decided that censoring it is the last thing I want to do, mostly because we as a society treat sex as shameful. If we just treated kids with a bit more respect and were less shameful about it, we would all be able to have much more honest and healthy relationships with it as we grow up. The show is definitely an 18+ show, but I stopped worrying about that because it’s not my problem – it’s their parents. I’m not the arbiter of who watches what and who consumes what I put out. Certainly, it would have made my life easier if I saw people being blunt about gay stuff as a kid.

This performance was the first time a lot of the artists had been together because of lockdown restrictions – what was the energy like in the room?
It was insane. It was emotional and electric. I think everybody cried at some point during the day. We’ve done the finale to Rain On Me and just watching my friends, giving their all to this amazing song and living their best life, was emotional. It makes me realise how much I cherish queer nightlife and how much I miss it. I can’t think about that too much because it’s going to be so long before we get that feeling back! Hopefully, we’ve captured some of that essence. There was that real emotion to all, and then everybody got a little bit pissed. We were really happy to spend time kiki-ing with other drag queens! We’ve all been feeling a little bit isolated, everyone has felt the pressure to create something in this time and it’s unrealistic to do that. This performance took pressure off the other areas a little bit. How important is it for the community to still celebrate Pride, even in lockdown?
People everywhere have been stuck in situations, potentially, where they don’t have their support networks. We’ve heard a lot of talks about that in terms of domestic violence against women, which is obviously a really massive issue, but we haven’t had a lot of coverage of what that’s doing for queer people. It’s hard for me to remember what that feeling is like, because I haven’t had that issue in so long. Hopefully, this gives people a window into something a bit joyful and hopeful. Beyond that, we’re fundraising for the Colours Youth Network, which is a great LGBTQ+ organisation for people of colour, who empower local provisions for queer people of colour by queer people of colour. It’s really important work, especially during Pride Month and everything that’s happening around Black Lives Matter. I think it’s really cool that we’re able to raise a bit of money for that.

As well as keeping the spirit of Pride alive, how can we make sure we are all doing our part and supporting our Black and trans brothers and sisters?
Everyone has the ability to do something. I think one thing that people overlook a lot is the ability to make change within their own places of work or family. Depending on where you work, if you work in a corporate environment, then start raising those conversations about structural inequalities within that organisation. Join a union! Talk about it from that point of view. If that isn’t you, if you’re younger, protest on the streets and sign petitions and educate yourself. I’ve been using this time to read and watch movies that are furthering my understanding of system racism around the world and in the UK. I’m treasuring the opportunity to do that. Basically, wherever you are and whoever you are, there’s something that you can do; whether that’s enriching yourself to understand the systems in place a little bit better and signing petitions, then great. If you’re in a position of power, then you need to get the word out even more.

Mariah & Friendz – Virtual Pride! premieres 27 June at 8pm BST. Tickets are priced from £7-10. Catch up will be available with subtitles. Visit Out Savvy’s website here to more information and to purchase tickets.