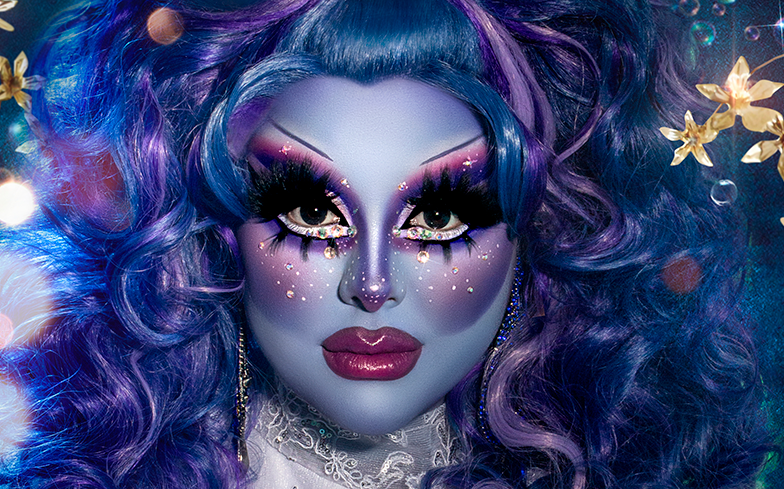 This “professional cupcake” is conquering drag as a cisgender woman and she doesn’t give a fuck if you like it or not.

If you comment hate on Creme Fatale’s social media page, she will turn it into a t-shirt and make a profit off it because she’s a what? A BUSINESSWOMAN!

The San Francisco-based performer and self-described “professional cupcake” has been slaying the world of drag for the past five years and is notable for her brand of baby doll lewks and pastel-coloured skin, which has led to a dedicated fanbase and over 110k followers on Instagram.

However, because she’s a cisgender woman, she’s received her fair share of ignorant comments from those who believe the art-form should solely exist for cisgender men.

“Criticism? I’m not open to it,” she laughs over the phone (that’s our new catchphrase btw). “Criticism by a 14-year-old on whether or not I should be doing drag based on my gender is not going to affect me.”

In our interview, Creme spills the T on her drag journey and explains why women can explore their identity by shantaying and sashaying just as hard as their male counterparts.

When did you discover your love for drag?
I discovered drag through not being able to find a place in the art world that I felt comfortable with. Through high school, I was a painter, but it didn’t feel all the way correct. I was obsessed with beauty, but I felt pressured by society’s views on women who were obsessed with beauty and the idea that people who were into beauty weren’t intelligent. I tried doing theatre, which was really cool because of the performance aspect, but I hated being controlled by a director. I wanted to have full control of what I was doing – and then I discovered drag. I grew up in the age of RuPaul’s Supermodel, but once I discovered more drag like John Waters’ films and Drag Race, it seemed like a combination of all these things that I loved to do. I realised I could have control of it and speak out on society’s views on women and work through my own issues with being a woman in the modern age. Obviously, there was a lot of hesitation because I thought, ‘Am I even allowed to do this?’

When did you come to the realisation that you could do drag too?
In San Francisco, I started going out and making my way in the club scene and I thought, ‘I should’ve never asked permission in the first place, of course I could do this.’ Because the way that people do drag in San Francisco is very progressive, and it still is, but especially at that time. It was about five years ago, and women have been doing drag in San Francisco for decades – there has always been female drag queens, it’s never been an issue or a problem. So when I showed up and started doing all this stuff, they weren’t fazed, it was more me thinking I was intruding in their space. I was told by the older drag queens there, ‘It is what it is, you don’t need permission, it’s an art-form, as long as you’re entertaining and you’re doing it well, there’s no reason why you shouldn’t be able to do it.’

Do you think people are against female drag queens because of a lack of education?
Absolutely. Courtney Conquers and I have been talking about writing a book because at this point in our careers, we’re so tired of explaining it to people and it would just be easier to guide them to a book. These are things that are easily looked up, but people don’t want to do the work. A lot of people feel ownership over drag, particularly cisgender men, they hold onto it very tightly but they don’t realise the entire art of drag is to allow people to express themselves and their stories and their art. I think it becomes a very complicated issue. At this point, I’m just like, ‘I’ll write a book.’

Men were stopping women from performing back then, and it’s still an issue now…
It’s funny that women need to ask permission to be women. It’s ridiculous. This obviously includes trans women.

You’ve built quite a following on Instagram, have you faced much criticism for your art?
Yes and no. I’ve definitely had a few run-ins. I do this thing where I turn their comments into a catchphrase and put it on merchandise. When I started getting more followers and popular online, I was already at the point where I was so comfortable with what I was doing, so I felt assured of my place in the community, so I didn’t feel as offended. I know from working for years in the scene and for doing drag so long that opinions don’t really matter. When I get negative comments, I just delete them. My page is a place of happiness, art, joy and exploring fun things and there’s been situations when people have gotten into arguments in the comment section defending me, which I really appreciate but I don’t need it. Criticism? I’m not open to it, unless it’s constructive, which it rarely is. Criticism by a 14-year-old on whether or not I should be doing drag based on my gender is not going to affect me.

Printing their hateful comments on a t-shirt is the perfect way to piss them off, I love it.
Yeah I’m just like, ‘Thanks for the cash!’

How do you think we can educate those who think drag is solely for cisgender men? Other than your upcoming book.
I think speaking logically about it. It’s hard for people to do that, apparently. Like, ‘Does this sound right to you? Dressing up as a woman and performing on stage as a woman, does this only belong to cisgender men? Does this sound correct? Think about it logically. Does that sound right? I don’t think so.’ It’s ridiculous to think that women and trans women, and trans men, everybody who doesn’t fall into a cis male category, would not be welcome to do drag when they are the ones who have experienced gender a little more intensely, especially trans women and men. They’ve spent so much time thinking about gender and processing it in ways that cis people can’t, and haven’t and won’t be able to. Even as a cisgender woman, doing drag helped so much with working through my own issues of society’s views on women and what it means to be a woman, especially a woman of colour. The criticism that’s the funniest to me is that trans women and women have an upper hand when doing drag, so it’s not fair. That’s the most ridiculous thing to me because that means you’re seeing drag just as female impersonation, which it isn’t, and probably hasn’t been in decades. So you’re already behind on that version of it. Men who don’t grow facial hair and do drag, wouldn’t you consider that an upper hand?

As a queen who hasn’t been on Drag Race, what is it like working on the scene?
It’s difficult, because queens on Drag Race have so many opportunities open to them. Seeing my friends who go on Drag Race, their lives change completely. But as a queen who hasn’t been on, it still feels possible for me. I have friends who have been working on other things like Dragula, and it’s helped them a little bit. It’s very time consuming for me. If you haven’t been on television and you’re not doing this full time… I have never just done drag as my job, which would be ideal. For the entire five years, I’ve maintained a full-time regular job and usually when I travel and do gigs, those are on my weekends, so I’m non-stop working all the time which can be tiring. I would definitely say it’s more difficult in that sense, where you spend so much time working on drag while maintaining a personal life versus just doing drag, which is an opportunity that can be afforded to you through Drag Race.

If you had the opportunity to compete on the show, would you go for it?
I definitely would. There was a point in my career where I said, ‘This is definitely the moment that I do this.’ But it seems very clear that that might not be an option for me any time soon. So the past few years, I’ve been resetting goals and seeing how I’m able to turn this into something that I could actually really make a life out of, without having to go on the show. I would definitely go for it if there were an option, but from where I stand now, it’s not going to be an option for at least for a few years. They have technically opened up the gender option for applications, but I think that’s just for show. I don’t think it’s being taken seriously, so I’m just reworking my goals right now.

I adore the show, but I want to see different kinds of drag sashaying into that werkroom.
It’s not really an accurate representation of how drag is in everyday life, and it’s upsetting. You do have a lot of fans of drag that are just fans because they’ve only seen the show and nothing else… they think they know the scene. It gives them false ideas of how drag is judged in real life and what constitutes good or bad drag because they’ve only learned it through Drag Race. It’s pretty frustrating that the show doesn’t look like what the world looks like.

What advice would you give to cisgender women who want to do drag?What I generally say is, ‘Just do it.’ I’m definitely the type of person who does something and asks for permission later. I know it can be difficult, I’m very lucky to do drag in San Francisco, a place where women doing drag isn’t a big deal. So when I give advice to people in situations where they aren’t so lucky, it’s a bit difficult for me because it can be more intimidating to be around people who don’t allow you to do it. But at this point, there are so many women doing drag. You can find so many of them online, on Instagram, on Twitter. If somebody is not allowing you to do drag, they are the ones that are being ignorant to what drag really looks like. It’s not as hard to find as when I started five years ago when I was searching for hours. You can find it now.