Courtney Act wants to give Piers Morgan a drag makeover 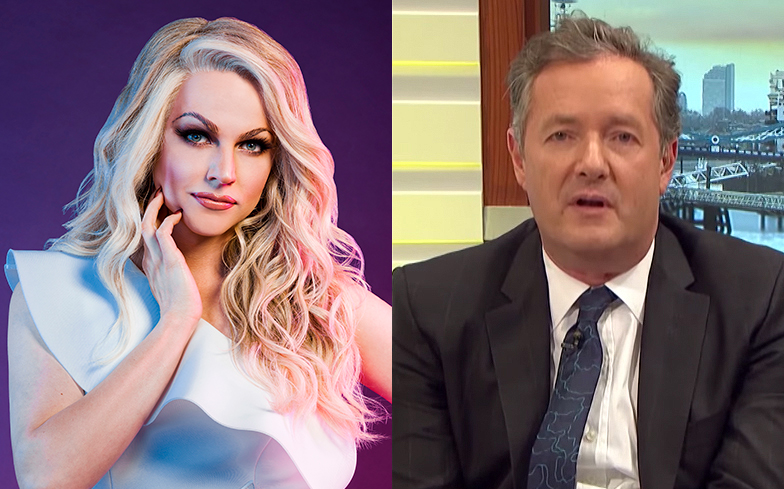 Well, this could be… interesting.

Courtney Act, one-time RuPaul’s Drag Race contestant and current British darling, made an appearance on Lorraine this week ahead of her Christmas special, Courtney Act’s Christmas Extravaganza, which airs on 24 December.

When asked who she’d like to give a drag makeover to, the Aussie queen had a controversial answer: Piers Morgan.

“There’s a gentleman who’s name is Piers Morgan who I would love to [make over],” she said.

Show host Lorraine Kelly then showed Courtney a mock-up of Piers’ face on her body, which is a sight we’re sure viewers won’t be forgetting anytime soon.

“That is genuinely frightening,” Courtney laughed.

Asked if Piers could be pretty, she replied: “It’s not about looking pretty necessarily, it’s about looking fabulous. Although I worry that trying to get Piers to sit still for the good three hours that it takes would be like trying to pin a wig on a cat.

“He’d just be squirming and giving his opinions.”

Hands up if you want to see @piersmorgan in drag. 🙋🙋‍♂️🙋🙋‍♂️
Let's make this happen, @courtneyact! #Lorraine pic.twitter.com/nPw3RSyPda

When we spoke to Courtney earlier this week, she shared her opinions on Piers and his controversy-baiting views, calling him “fragile and insecure” and criticising him for never allowing his guests to talk.

Make sure to tune into Courtney’s Christmas Extravaganza 11.05pm, Channel 4 on Christmas Eve.