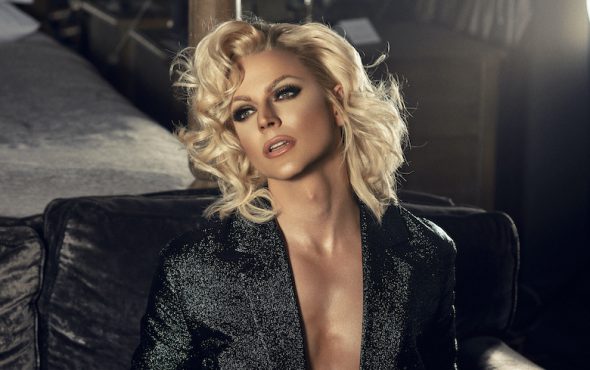 Heteroflexible is inspired by Jesus. No, really.

Courtney Act has revealed the inspiration behind her infectious new pop anthem, Heteroflexible.

The dancefloor banger, which is included on the star’s incredible new EP Drop of Fluid, sees Courtney address the concept of situational sexual behaviour as she contemplates a romance with a heteroflexible male.

Courtney, who admits to having several encounters with heteroflexible men, says the song was inspired by… Jesus. No, she won’t be debuting at number one on the Hot Christian Songs Chart anytime soon, because it’s not about that one.

“I was in LA and I was the entertainment correspondent for Lorraine Kelly. I was walking down Melrose in drag and I was with the Lorraine crew, and there was this man on a bike who rode past,” Courtney tells GAY TIMES.

“We made eye contact and he stopped, got off his bike, turned around and stared, then I stared. We walked towards each other and started chatting. His name was Jesus, not pronounced ‘Heyzeus’, his name was Jesus.

“He has green eyes and I think he lives in France because I found him on Instagram and sent him a message saying, ‘I know that we only met for about four minutes on the corner of Melrose, but I wrote this song about you.’

“English was his second language, so he was a bit confused, but he thought it was very sweet.”

Don’t you just love modern technology? Heteroflexible, as well as the other two incredible songs on Drop of Fluid, will be performed live on Courtney’s critically-acclaimed show, Fluid, which arrives in the UK and Ireland next year.

“I was honoured the show sold out and received amazing reviews when it opened earlier this year during Sydney Mardi Gras, it comes from my heart and is an exploration of identity, gender, sexuality and a whole lot of fun. Get into it, the future is fluid!”

You can purchase tickets for Fluid here.