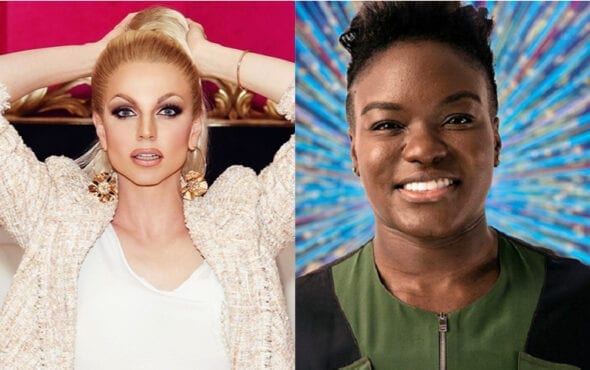 Yesterday (2 September), Strictly Come Dancing confirmed it would have its first same-sex couple when it announced that double Olympic gold-winning boxer Nicola Adams would be taking part in the upcoming series.

“I’m so excited to see Nicola on the dance floor and finally see a same-sex coupling on Strictly,” Courtney enthused. “I think people will be shocked that the sky doesn’t fall in.

“I’m excited as well because Nicola is going to be the leader, so in ballroom there is a leader and follower – some people might know these as the man or the woman roles.”

Courtney added: “I’m excited to have her flip people’s expectations on their head when she is spinning across the dance floor and lifting and leading.”

Courtney did share her fears about an online backlash, and already some have claimed that they will no longer watch the show, but she urged Nicola to ignore the negativity, saying: “There’s always going to be this vocal minority, especially on the internet because you get a disproportionate volume of negativity.

“Ultimately, they represent such a small portion of the population. Focusing on the support and the love is so much more worthwhile.”

And Nicola has already received a lot of backing from former Strictly contestants, with series 16 champion Stacey Dooley posting: “Strictly are doing a same sex couple and YES THIS IS LONG OVERDUE!”

And hitting back at the homophobia around the announcement, series 10 finalist Dani Harmer posted: “If 2 women dancing together effects your life in anyway then you need to get a new one!! Well done @bbcstrictly it’s about time xx”

Courtney also spoke about how important it was for the LGBTQ+ community to get this representation, with Nicola being bisexual, saying: “It’s so important, not just to how the queer community sees itself, but to how society sees itself as well.

“When you see people on television who reflect what society really looks like, not only do those people who are minorities feel more included and understood, but also the wider community are able to look and go ‘Their stories are just like my stories – we are not that different’.”