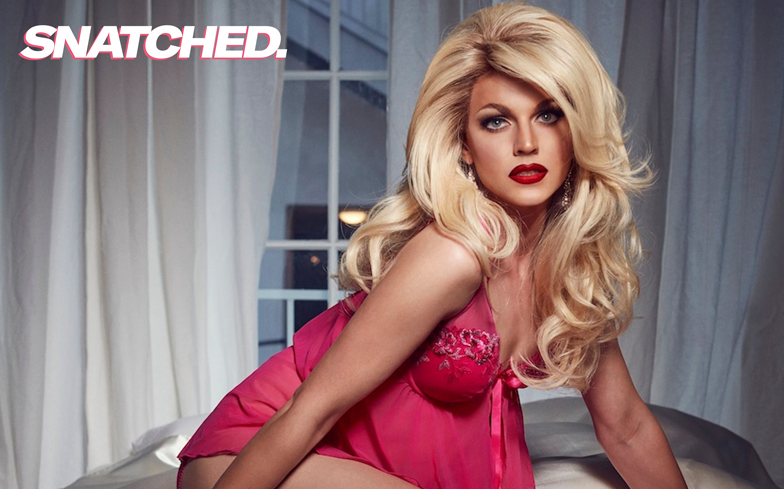 Courtney Act has some advice for Strictly Come Dancing.

Everyone’s favourite Aussie drag queen-turned-reality TV darling made history when she became the first person to dance with a same-sex partner on Dancing With The Stars, and now she thinks it’s time the UK caught up.

“Any excuse about the traditions of ballroom dancing and all that sort of jazz, it kind of starts to sound a little bit awkward now that we’ve done it in Australia,” she tells GAY TIMES. “I think it’s definitely time.”

As she prepares to grace London’s Underbelly Festival with her show Under The Covers, we spoke to the Aussie queen about her time on Dancing With The Stars, who she wants to see on Drag Race UK, and what makes our drag unique.

Congratulations on making the finals of Dancing With The Stars – how are you feeling about that whole journey?
Thank you! Oh my god, it was just so magical and so much fun, but it was also so much hard work, it was four months of dancing and we were rehearsing for at least six hours a day, and I think I had about three days off in the whole four months. I got to tell so many stories on mainstream television, it was just amazing. Somebody’s made a supercut of all of the dances on YouTube, and my dance partner Josh sent it to me and we both sat there watching it and reminiscing over the phone.

Based on your track record, you really were destined to win. Are you a bit gutted about that?
You know what, this sounds really trite, but I feel like we did win. From the judges points we did actually win every episode except for episode four, but then we were pipped at the post by Samuel Johnson, who is actually so lovely. I remember him in the first promo shoot and I was like, ‘Oh, she’ll be out first’, but he actually was just amazing and he got better and better every week, and also he’s an amazing fundraiser in Australia, his sister unfortunately died of cancer a few years ago and he vowed to raise $10 million for cancer research, and so he’s on this big journey of his own and people really love that cause, and it is a very worthy cause. So I in no way felt gutted, I felt really, really happy for him. And we got to do so many cool things! We were the first same-sex dance partnership [on the show], which was amazing, and so many of the performances were kind of risque, like going from Courtney to Shane in the space of one minute and 20 seconds. That was dangerous, but it worked.

Did you face any resistance from the show when you decided to dance as Shane?
No, they were totally supportive! I think I used the Courtney Act patented lubing technique to get them used to the idea, so I thought, ‘I’ll just get in there, I’ll be fabulous and have fun, and show them there’s nothing to be afraid of’, then in episode three I did the Courtney-to-Shane Tango which they loved, and then the Samba in episode four was our first sexy dance, and I kind of loved that people were seeing this was a guy dressed as a girl dancing sexy with another man. And I was planning to do something as Shane but I couldn’t quite find the right time, and then the Tango-Foxtrot came up and I was like, ‘Oh good, this is like a sexy, intimate, romantic dance so it’s not like we’re just doing the Jive next to each other’. I wanted people to see two male-presenting people in each other’s arms. I remember the first time I saw two men dancing the Tango together I was shocked, and I remember how confronting it was for my brain, even though I’m a queer person just to see two men dancing romantically was like, ‘Wow!’ and I figured there’s probably a lot of people around Australia who still haven’t seen that, so to get to do that on Dancing With The Stars and hopefully help to normalise it and create a positive example is a really amazing opportunity.

There’s a debate in the UK about having same-sex partners on Strictly Come Dancing, but the show still won’t let it happen. Do you think it’s time for that?
Absolutely, and I think there’s got to be a same-sex couple on Strictly this year. There just has to be. It’s not even a question in my mind. It would just seem really weird not to. And I mean, Craig Revel Horwood was a judge on our version as well, and he’s a judge on Strictly, so I think it’s definitely time. Because like, any excuse about the traditions of ballroom dancing and all that sort of jazz, it kind of starts to sound a little bit awkward now that we’ve done it in Australia. You’re bringing Under The Covers to London’s Underbelly Festival this month, what we expect?
Well I did the show around the UK last year, and I did it in London at the Palladium which is this ginormous venue which where the front row was like 20 metres away, so it wasn’t very intimate, but this is a gorgeous intimate venue and I’m doing it with a live band this time. Last time I just did it with a piano, so I’m excited for that. After doing – and then losing – Eurovision: Australia Decides, and then performing with Jake Shears when he opened for Kylie on her Australian tour, I was just like, ‘Oh my god, I love live music so much’, so I knew I had to do my Under The Covers show with a live band. There’s loads of great songs and costumes, we’ve updated all that, there’s lots of stories about Dancing With The Stars, and maybe a little ballroom dancing in there too.

Well, you spent all that time learning, you may as well show it off.
Yeah, exactly! Also, like, the fitness level I achieved from dancing that much, I’m now working hard to not just go back to my regular sloth-like self. So I might try to keep it up in my show.

How do you decide what songs you want to perform for Under The Covers?
Well they’re all famous covers of covers, so I have a giant spreadsheet, and I spent weeks Googling and I put every cover song that I could find on there, and then I picked out ones that I’d like to do, that I could sing well, and that the audience would enjoy, and then I’ve tried to put it together following the loose theme of my show. So for example, Bjork’s It’s Oh So Quiet is such a great song, and that’s a cover from a Betty Hutton song in 1951, and that was a cover of a 1948 song that was originally in German, Und jetzt ist es still, which is German for It’s Oh So Quiet. Lot’s of people don’t know that. We also have Drag Race UK coming up this year. Having lived in London for a while now, what do you think international audiences will find unique about British drag?
I can’t wait, because I love watching Drag Race but I feel like the drag has been coming through the same filter for a few seasons now. I mean, coming from Australia to the US, I love the pageant drag, I love all the different styles of drag, but I feel like the UK is just going to inject a breath of fresh air into the show. Have you seen any of Drag Race Thailand?

I saw a clip where one of the contestants [Kandy Zyanide] set her dress on fire, which was incredible.
Yes! I saw that one too. Unfortunately she did suffer burns after that, so don’t try that at home. But it’s just amazing how there’s a whole culture and sensibility in the UK, and the history of drag and camp that is part of pop culture there is going to be wonderful. I’m really excited to see the injection of fresh talent, and that fresh approach to drag and how it will shake up and influence the US version.

Are there any UK queens that you would like to see on the show?
I’d love to see Cheddar Gorgeous and the House of Gorgeous, they’re amazing. The UK has so many legendary queens, who I don’t think would necessarily be right for Drag Race, like all the East London queens that I love. People like Jonny Woo and his clan are all epic, although I don’t really picture them competing on Drag Race. So I’m gonna go with Cheddar and her clique, I think they’re pretty epic.

Courtney Act: Under The Covers will be at Underbelly Festival from 12-19 May. Tickets are available here.