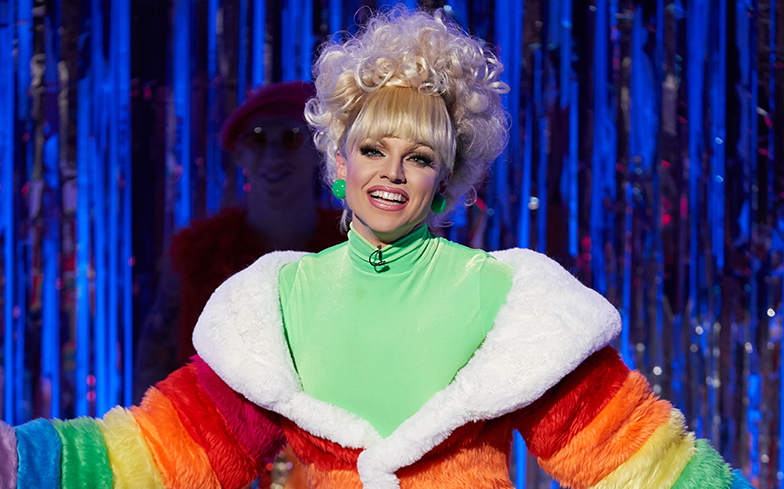 “If I can hold my own with Ann Widdecombe…”

Courtney Act is having a hell of a fucking year isn’t she? Back in January, the Aussie queen became the first drag performer to win Celebrity Big Brother, and later, she hosted her own reality show focusing on a group of bisexual, pansexual, fluid and questioning British individuals on the “ultimate adventure to find love.”

Now, the Drag Race fan-favourite has landed her very own “bloody gay” Christmas Extravaganza for Channel 4, which will feature A-List celebrities such as Leona Lewis, Little Mix and Zara Larsson. It will also be the first televised reunion with her Drag Race sisters, Adore Delano, Bianca Del Rio and Darienne Lake, since they competed on the show’s acclaimed sixth season.

Ahead of its premiere on Channel 4, we caught up with Courtney and discussed what we can expect from the Christmas special, her reunion with ABD (Adore, Bianca and Darienne) and why she’d like to challenge Piers Morgan on Good Morning Britain.

What can fans expect from your upcoming Christmas special?
It’s really bloody gay. It’s really queer, diverse and fun. There’s dancing boys, there’s costumes, there’s giant sets, Little Mix, Leona Lewis, Zara Larsson, Adore, Bianca and Darienne. There’s also Briefs, an Aussie all-male burlesque performance troupe, Le Gateau Chocolat, Ali McGregor… I can’t wait for people to watch it, it’s like nothing else on telly. It’s like an old school Judy Garland, Sonny & Cher show Christmas special. It feels like Hollywood, but it’s Borehamwood! The opening number starts off all, you’ll think, ‘This is cute,’ and then it pans out and you see these six foot candy canes. I’m excited. We start off very traditional, like you’re just sitting there watching it with your family. It’s kind of like boiling a frog, you know that thing where you put a frog in boiling water and it doesn’t realise that it’s being boiled? Because it just goes up so gradually? We start off very traditional, red and white fur with boys in tuxedos, and then we finish off with a giant LED rainbow and confetti and boys in tight rainbow pants and fur jackets and pink berets. What can we expect from the celebrity guests?
Well Leona and I had a lovely time. We did a duet together, which was really fun. I felt like I was in the finals of X Factor, and I sang the first part of the song and was like, ‘Ladies and gentlemen, Leona Lewis!’ So we sung our duet, and I did feel a little bit like a bad host because she opens up part two, and it’s two giant presents, three metres by three metres. So I’m sitting on top of the biggest present, with this bright pink costume, and it kind of rivals my wings on Drag Race, and I invite Leona Lewis onto my show and I put her on the small box in the corner and I’m wearing a giant costume like, ‘Hi!’ But she was so adorable and we had a really great chat, and I’ve been to Leona’s house before – she didn’t know – it was a pumpkin carving party a couple of Halloween’s ago, so that was fun to spring on her. I said to her, ‘So, I’ve actually been in your house before.’ And she was like, ‘What?’ She was quite alarmed, like genuinely.

What is your ultimate Christmas song?
I mean, apart from Head to Mistletoe by Courtney Act available on iTunes, I’d have to say All I Want For Christmas Is You. It’s like the only modern standard Christmas song… No one’s come along with a Christmas song since that. I do love 100 Degrees by Kylie and Danni, that’s really fun. They also did a performance of it on X Factor Australia with boys in silver fur coats and hot pants. It was prime Australian television, Kylie and Danni in Cher and Tina Turner inspired Mackie costumes. It was the gayest thing on television.

You reunited with Adore, Bianca and Darienne on tour, and for the show. What was that like?
So while I was on stage, everyone was hanging out in the dressing room, which is also a part of the show. Just watching Bianca, Adore and Darienne talk to Leona Lewis was quite fun. She’s quite quiet and reserved. Darienne, I can’t remember exactly what she said to her, but something about how she was dressed as a giant hot dog on Drag Race singing Bleeding Love. Leona was not quite sure what to make of it, and I was like, ‘Was she dressed as a giant hot dog singing Bleeding Love? I don’t remember that.’ But yeah, we had so much fun on the tour, it was so much fun being back together. Once we got the show on the road, we got to London and we were standing there for like an hour trying to work out this one move and it was basically a step tap. I was like, ‘Could I just be dance captain?’ I looked like someone who worked at Foot Locker. I felt like a white version of Janelle Monae in Moonlight, but why do I feel like that… I don’t think she works in a Foot Locker. Are you planning on reuniting with ABD again?
I hope so! Do we have plans? I don’t know if we have any plans yet. We always see each other when we’re in the same city. I know Adore’s doing a tour here next year, and Bianca’s doing a big tour, Wembley Arena. Arena, not a stadium!

People have now been campaigning for her to come on and challenge Piers Morgan.
Well, I don’t know. I feel like she would just yell at him, which is kinda what he does to everybody else. So he would get his own back. But also in some way, I think it would just be a screaming match. It would be fun. She’s one of the few people I think could wind him up and put him down. Give her a few breakfast cocktails, a couple of white wines with her coffee, and then let her rip on Piers. But I don’t think it would be a clean fight.

I felt genuine rage when I watched his segment with Munroe Berdorf, because he wouldn’t fucking let her talk.
I just don’t know what is so fragile and insecure about his own person, that he invites somebody on the show and then doesn’t let them talk, and then just needs to be, it’s not even verbose, he’s just unrelenting and not very empathetic to the people he’s inviting on the show. Part of me thinks it’s a tactic to get ratings. He seems like an educated man. I remember years ago, loving him, before I really knew who he was. I remember watching when his show came to America, I did find the way he would poke around quite fun, but it’s just so counterproductive, especially when you’re dealing with minority issues that are really sensitive and nuanced. To invite someone on your show and talk over them, and also invite them on the show with the woman who was talking about gender diverse people in schools, and not actually giving them the proper platform, it feeds into the propaganda machine of the right and alienates people. He epitomises the worst type of male privilege, and he is so up his own arse. He doesn’t understand the concept of privilege, and he doesn’t acknowledge it, that’s how steep he is in it that he can’t even see.

Would you ever go on and challenge him?
I have been thinking about it. I actually text a friend this morning. Everyone thinks about how a situation would go in their own head. It’s like how you picture getting mugged, and you think you would turn into a superhero, but you’d actually just lay on the ground screaming, ‘Please! Not my face!’ So in my head, I would give Piers a piece of my mind, but I’d be scared about the reality. If I can hold my own with Ann Widdecombe, I think there’s a good blueprint, even though Ann isn’t as goading or aggressive as Piers. I would love to give Piers the read of life, like Cher reading Jack Nicholson in Witches of Eastwick. I just watched it this morning.

Courtney proceeds to play the clip up on her phone: “Well, you know I have to admit I appreciate your directness Daryll. I will try to be as direct and as honest with you as I possibly can be. I think, no, I am positive, that you are the most unattractive man I have ever met in my entire life. In the short time we have been together, you have demonstrated every loathsome characteristic of the male personality, and even discovered a few new ones. You are physically repulsive, intellectually retarded, you are morally reprehensible, vulgar, insensitive, selfish, stupid. You have no taste, a lousy sense of humour, and you smell. You’re not even interesting enough to make me sick.”

It’s ahead of its time.
Yeah [laughs]. She was channelling a conversation with Piers.