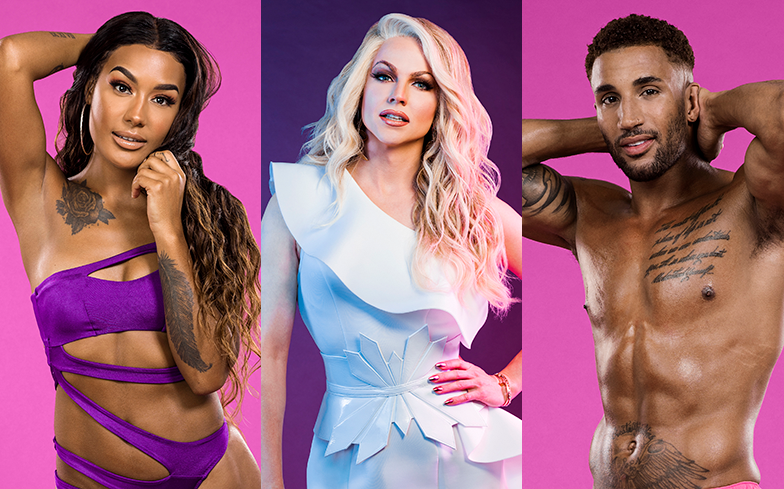 Courtney Act has unveiled the cast of her highly-anticipated dating show, The Bi Life.

Coming to E! in the UK and Ireland this October, the ten-part series will focus on a group of bisexual, pansexual, fluid and questioning single British individuals on the “ultimate adventure to find love”.

Fronted by Australian-born Celebrity Big Brother winner Shane Jenek, better known as drag queen Courtney Act, the show will take place against the backdrop of Barcelona, which is often referred to as the LGBTQ capital of Europe.

“As if this summer hasn’t been hot enough, we decided to crank it up another notch with The Bi Life on E! It’s high time there was a dating show for the large number of young people today, like me, who are attracted to more than one gender,” said Courtney in a statement. “In 2018 we know that sexuality is fluid and sharing the stories and experiences, the laughter and the love making, of young bi people is so important. So get ready to see the true stories of bisexual singles, who are the largest part of the LGBTQ+ community, but the least known.”

Lee Raftery from NBCUniversal International commented: “This new commission is a pivotal point for E! Entertainment Television in the UK as we bring a fresh take on the full diversity of modern British relationships.

“With the number of British people identifying themselves as bisexual rising by 73% in four years, we are incredibly excited to be introducing this pioneering series to our audiences in the UK and Ireland.”

Meet the cast below… Carmen is a bisexual model who’s joined the show to discover more about herself. She said: “I’m on a personal journey of discovery, but if I fall for someone too then I’m completely open to that.” Carmen joins the cast in the sixth episode. Hopeless romantic and fraud prevention officer Daisie describes herself as “unlucky in love” and hasn’t been in a relationship for five years. Daisie is “proud to be bisexual”, but finds dating women hard because they’re ‘threatened by all the competition’. London-based photographer Irene has joined the show because she wants to “actually feel like a bisexual”. She continued: “I’ve acted very straight for a while, so to be comfortable in it would be great.” Kyle is a support teacher from South Wales who provides one-on-one support for children with learning difficulties. He’s been out as bisexual for a year now, and wants to explore his sexuality with like-minded people. Club promoter Leonnie applied for The Bi Life because she needs a new adventure, and said the message of the show is one she ‘really stands behind’. She says living as her authentic self is “the best thing in the world – I am no longer just stuck in a closet and neither do I feel embarrassed.” Mariella is a make-up artist from London. She’s looking for something serious because she feels at 33, there’s pressure for her to settle down. To those who are in the closet, Mariella says “just be honest. Speak to your loved ones, I’m sure they would understand and love you regardless.” Influencer agent Matt describes himself as “up for it”, and is looking for a partner who’s body confident. He says he’s looking for a serious relationship, and mostly dates men. His advice to those struggling with their sexuality: “Just be honest. Speak to your loved ones, I’m sure they would understand and love you regardless.” Michael is an international swimmer who currently represents Jamaica, and his goal is to represent the country at 2020 Olympics. He describes himself as “bubbly, happy and joyful” and is taking part in the series because “the only time a swimmer gets off is summertime”. Fitness influencer Ryan hails from London and has had relationships with men and women, with his last relationship being with a man. He’s participating in the show because he thinks bisexuality isn’t represented much in the media. “I think it’s good to be able to be yourself and show who you are and not be afraid to do that,” he said.