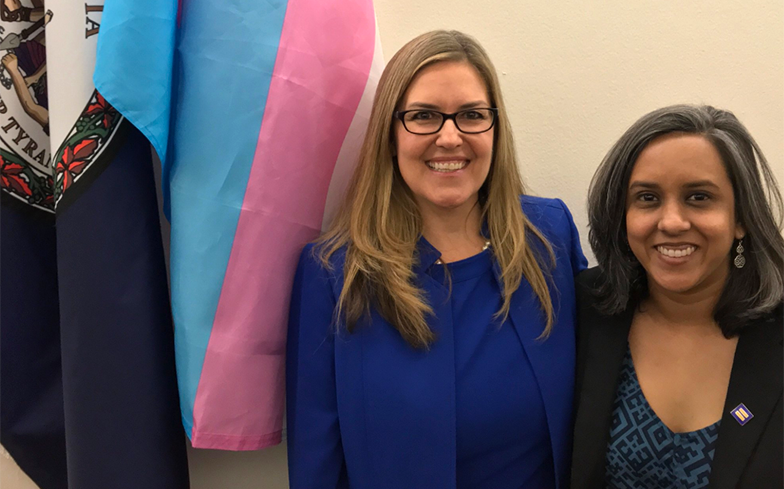 “I wanted to show my solidarity because we are talking about my friends and family.”

Newly-elected congresswoman Jennifer Wexton has received praise for flying the transgender flag outside her office.

The American politician wanted to show support for the community as a sign of honour for her transgender relative.

She told the Washingtonian: “The trans community has been under attack. I wanted to show my solidarity because we are talking about my friends and family.”

Narissa Rahaman, who works for Human Rights Campaign (HRC), shared a photo on Facebook, and said it ‘brought her to tears’.

“We walked up to Congresswoman Jennifer Wexton’s office and the first thing I saw was the trans flag proudly and openly displayed next to the Virginia flag,” she said. “The congresswoman said to me, “Did you see the flag?! I think we’re the only office on the Hill with one.”

The trans pride flying proudly outside her office is a sign that @JenniferWexton is the pro-equality champion Virginians deserve. #EqualityForward #VA10 pic.twitter.com/MFbYRBmbPf

“Thank you to everyone who knocked a door and made a phone call on this campaign. This flag is there because of you and for you! My heart is full.”

Human Rights Campaign later tweeted the photo with the caption: “The trans pride flying proudly outside her office is a sign that @JenniferWexton is the pro-equality champion Virginians deserve.”

Danica Roem, who became the first openly trans state representative in the United States last year, praised Wexton on Twitter for the display of support.

“Thank you, Rep. @JenniferWexton,” she wrote. “I’m proud to call you my congresswoman.”

Thank you, Rep. @JenniferWexton.
I’m proud to call you my congresswoman. https://t.co/3X0qZ7ah6P

Wexton has been a strong supporter for the LGBTQ community during her political career, and has been endorsed by the Human Rights Campaign.