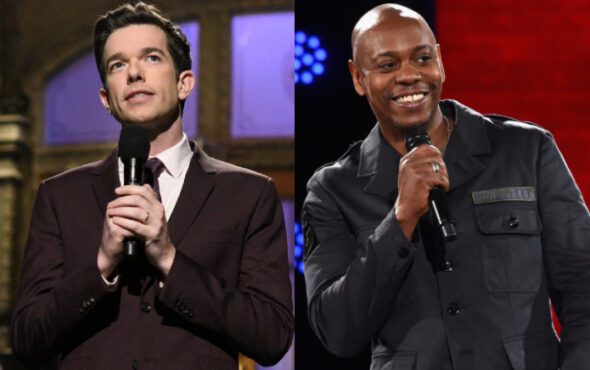 Comedian John Mulaney has been slammed by fans for including Dave Chappelle in his recent comedy show.

Back in October 2021, Netflix released Chappelle’s comedy special, The Closer. In the feature, the 48-year-old declared himself a “TERF” after defending Harry Potter author JK Rowling’s transphobic comments.

Shortly after the special dropped, Chappelle and Netflix were hit with pushback from LGBTQ+ activists and various celebrities – which resulted in a high-profile company-wide walkout.

But even though he received massive amounts of backlash, Chappelle has continued to tell transphobic jokes in his comedy sets.

During Mulaney’s Ohio stop of his From Scratch tour, LGBTQ+ fans of the Big Mouth star were surprised when Chappelle was announced as the opener.

According to a report from Variety, during his opening set the comedian told an array of jokes targeting the LGBTQ+ community.

After Chappelle’s 15 minute set, Mulaney returned to the stage and hugged the controversial figure before starting the show.

Due to the venue’s no phone policy, fans took to Twitter after the show and expressed their disappointment over Chappelle’s inclusion.

One fan wrote: “Okay so tell me why I just went to the John Mulaney show and Dave Chappelle was a surprise opener and made not only a transphobic joke but a homophobic one.”

Another user tweeted: “Dave Chappelle made a surprise appearance at John Mulaney’s show tonight and it took appx 6 seconds for him to start being homophobic so uh… that happened.”

Fans also called out Mulaney for giving Chappelle a platform for his anti-trans jokes.

“John Mulaney, so many of us think the whole world of you. So I’m really disappointed that Dave Chappelle was at tonight’s Columbus show, doling out transphobic jokes—and I’m kind of devastated that you then embraced him and thanked the audience for dealing with it,” another fan said.

Representatives for Mulaney and Chappelle have not released statements addressing the aforementioned performance.

@mulaney John, so many of us think the whole world of you. so I’m really disappointed that Dave Chappelle was at tonight’s Columbus show, doling out transphobic jokes—and I’m kind of devastated that you then embraced him and thanked the audience for dealing with it.

As a trans person at the John Mulaney show where Dave Chappelle came out and told a bunch of transphobic jokes i just wanna mention how uncomfortable I was at the show after I heard 12k people laughing at him :/ like I did not feel safe anymore

Dave Chappelle coming out right before John Mulaney’s set (totally unplanned might I add) and telling transphobic and homophobic jokes felt like a fucking slap in the face.

Dave Chappelle made a surprise appearance at John Mulaney’s show tonight. Got a standing ovation, reiterated awful jokes, and hugged Mulaney before leaving stage, and well, that kinda fucking sucked